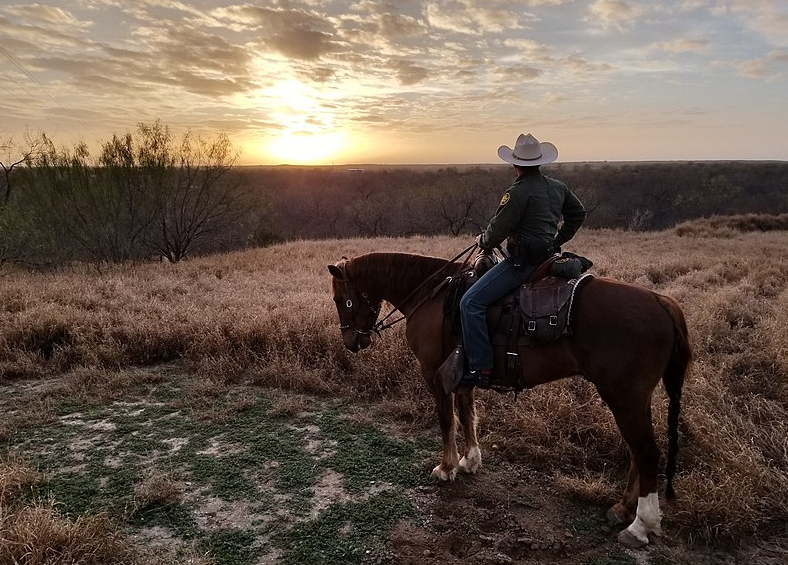 I never slept well at Casa Vides in El Paso. It wasn’t the fault of anyone there. It’s just how I am. I wake up pre-dawn, and then my mind races for a while. While I was staying at Casa Vides, I would get up and sometimes go outside. I would stand on the upper landing in the cool breeze and stare at the lights of El Paso. It was usually quiet, except for the sound of the helicopters.

There was always a helicopter in the sky in El Paso. Day or night, there was always somebody flying along the border. That was 24/7; constant, endless surveillance.

While we were in El Paso, we had a meeting with members of the U.S. Border Patrol. They met us on the dirt road that runs parallel to the wall. Four agents got out of an SUV. Three of them were in uniform, and one was in plain clothes. They were all Latinx. I’m not sure why that was. I don’t think it just a coincidence.

The agents explained their work. The Border Patrol monitors the territory in between the official ports of entry. The U.S. Customs and Border Protection folks work the ports of entry. Border Patrol are in green uniforms and the CBP in blue. The Border Patrol officers have a big job. They usually operate alone, seeing as there aren’t enough agents for them to work as teams. They ride in SUVs or on ATVs. Some of them ride horses. Some fly in helicopters.

The Border Patrol has a wide selection of surveillance equipment. They have infrared cameras, seismic ground sensors, and magnetic sensors. They have all of the newest toys.

The agents spent most of their time describing the humanitarian side of their work. At least one of them was an EMT. They do search and rescue missions to help people who are lost in the desert. They catch human traffickers. They stop the “bad guys”, or try to.

I asked one of the agents, “How much of the drug traffic do you manage to stop?”

I didn’t get an answer. The agents told us that was no accurate way of measuring their success rate with regards to drug interdiction. I found that to be interesting.

If these agents are right, then we, the people of the United States, are throwing billions of dollars into an ambiguous fight against the cartels. We have no idea if what we are doing is effective. We have no way of knowing if we are winning the war on drugs. We are just blindly hoping that our efforts are making a difference. I don’t see this as being a good way to operate.

I don’t envy the Border Patrol agents. They seem to be dedicated.

However, it appears that they are doing a thankless, and perhaps impossible job. They are trying to hold back a relentless tide of desperate migrants. They also are trying to stop drug cartels that are probably as well equipped as the Border Patrol is.

It’s a bad situation, and the sound of the helicopters reminds me of that.