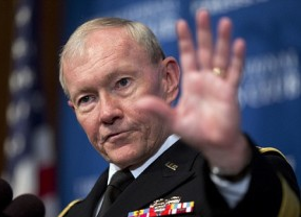 Editor’s Note:  This happened a year ago, but it’s a performance worth watching again.

General (retired) Martin Dempsey was a soldier’s soldier.  Throughout his career, and especially during his time as Chairman of the Joint Chiefs of Staff, he commanded enormous respect both within the military and within the Beltway.  Among Dempsey’s many accomplishments include command of 1st Armored Division, V Corps, CENTCOM, and TRADOC.  He was also the Chief of Staff of the Army.

No shrinking violet or armchair general, the former Armor officer is a multi-tour combat veteran who commanded the Multi-National Security Transition Command-Iraq (MNSTCI), and earned both a Combat Action Badge and a Bronze Star with “V” device for valor.  He also has more than a half-dozen combat stripes crawling up the right sleeve of his Army Service Uniform. 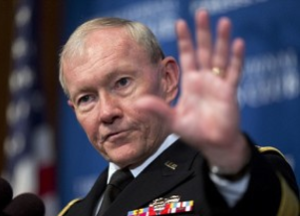 While Dempsey’s storied career speaks for itself, many people don’t know that he is also an accomplished singer.  I don’t mean “drunken karaoke” singing; I mean straight-up, American Idol-like talent.  He is known to demonstrate this talent at official events, such as USO shows, receptions, or last year’s West Point graduation.

While he favors traditional ballads, General Dempsey is also known to belt out modern pop tunes and classic rock.  Never one to fear a large crowd, Dempsey was able to showcase his singing ability one last time at his retirement yesterday.  Assisted by members of the Army Band, and with the President in the audience, Dempsey concluded his military service with a memorable performance of “The Parting Glass,” an apt postlude for a career that lasted forty years.

It wasn’t quite a “mic drop,” but as the last strains of “The Parting Glass” were carried by the band, General Dempsey relinquished the microphone, walking away from the power of his office and into waiting arms of his family, a modern Cincinatus returning to the fields of civilian life.  Personally, I’d always wanted to go out like the quitting scene from Half Baked.  But I’ve got to admit, this was far more classy.  Folks, I don’t think it gets much better than this.

Well done sir, thank you for what you’ve done for our military and for our nation.

(see next page for the lyrics to “The Parting Glass”)