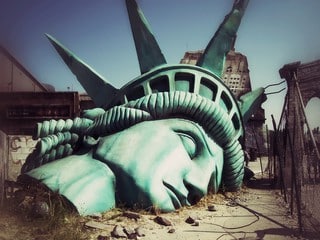 This first appeared in The Havok Journal on February 15, 2019.

A few of the articles I have written lately have focused on cultural issues that, at their core, are very religious in nature. Several areas of popular concern show us to be a people who, despite moving away from Christianity as a nation, are still every bit as religious as we’ve ever been.

Some of the critiques I’ve received on these articles center on the idea that Havok Journal as a publication is military-based and my topics stray a bit too far from that. We should stick with what we know, I’m told.

But I’m going to not only push back on that idea, but I’m going to use a bulldozer to do it with and come out swinging (as the title of the article suggests). Not only is that criticism invalid, but my topics are directly related to the very purpose of our country’s military.

Howard Schultz, the outgoing Starbucks executive who has indicated he may run for President in 2020, recently stated that the United States’ $21 trillion (and counting) debt is the greatest “domestic” threat our nation is facing. He gave some credit to President Trump for helping to foster a strong economy but warned that the Stock Market is not going to continue at its current pace.

There is substantial evidence, however, to suggest that he is actually being somewhat optimistic here and downplaying the legitimate concern about our economy. A recent study of America’s 75 most populous cities, for example, showed that 63 of them are out of money—as in they can’t pay their bills and are in debt up to their eyeballs.

In case you are thinking that “pay their bills” means that they have to work some deals with the power company in order to keep the lights on, let me clarify that the majority of this debt is related to pensions and retiree benefits like health care. So when “can’t pay” becomes a reality, it means all those retired city employees don’t actually get their retirement checks and health care paid for.

If you don’t think that’s a big deal, consider that we are about to see something unprecedented in our country’s history (or most of world history, as far as I know): in the next ten years, we will have more people retiring than we will have people to replace them. Remember that the Baby Boomer generation had fewer kids than their parents and they make up a huge portion of the population. There is a reason why their generation earned that name, after all.

A mammoth chunk of the population, who decided to procreate at a lower rate than previous generations, is about to collect on money that is either running out quickly or, in some cases, not even there. Think that won’t be a problem?

Now consider that it’s actually much worse than that. We as a nation just elected a whole bunch of people to Congress who are…. Fiscally responsible? Ready to put differences aside to address the looming debt? Willing to set their social justice agendas on the back-burner while we address our out-of-control spending?

Not only no, but several of them want to double-down and spend more on ludicrous plans like a “Green New Deal” and “Medicare for all.” In other words, they want a turbo-charged version of exactly what got us into the debt crisis we are already facing—higher spending without the revenue to pay for it.

This is, of course, not unique to only one of the political parties in Washington. Aside from people like Rand Paul, Mike Lee, Thomas Massie, and Justin Amash, nearly everyone in both major parties advocates for unsustainable spending programs either at home or abroad.

All of this is why I remain unconvinced and unimpressed by my fellow veterans and current military members who decry Donald Trump’s (who definitely doesn’t get a pass on spending issues) move to pull troops out of Syria. Supposedly we are “abandoning our allies” and creating a situation that will allow a “power vacuum” for people like Russia to step in.

You know what else will cause a power vacuum and us to abandon all our allies? Running out of money.

How many people do you personally know that are willing to fight without a paycheck in places like Syria? Or how about with the understanding that, if they are killed, the government has no money to pay their spouse and children back home? What if the VA runs out of money to pay all of us injured veterans—still willing to go fight for some nebulous objective that is probably unattainable in its most basic form?

Why be concerned with a power vacuum in the Middle East but not on our own soil?

That is where we are headed without major changes, and it’s a question of when not if—we are running out of money, and some say it is actually much worse than what the U.S. government is publishing. But as long as we are electing people based on Unicorn Dreams of social justice (which no one can define) instead of mathematical realities, the end result is inevitable.

The greatest threat to our national security is not Russia or ISIS or even China. The biggest danger we face is ourselves and our desire to appease the image-worshipping masses who believe that it is possible to spend our way to utopia and reshape society through screaming populist alarmism.

I hope I’m wrong, but at this point, I see little evidence that I am.
_______________________________________
In a time of hyper-specialization, Gregory is an accomplished and educated generalist who understands that knowledge from a multitude of disciplines is necessary for true wisdom. A continuous wanderer and seeker of knowledge, he has worn three different colors of beret for the US Army and worked in everything from metal fabrication, music, and bartending to politics and publishing while on a constant search for life’s meaning.