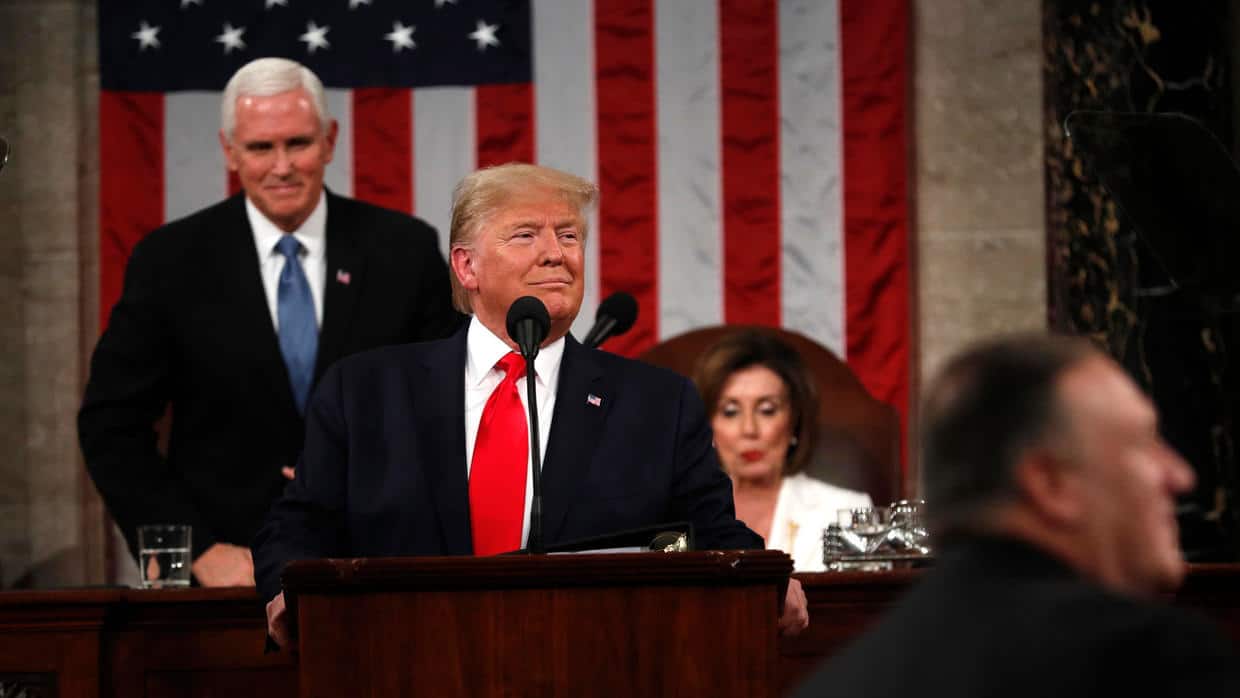 The State of Our Union: Politics Trumps Respect, Honor, and Sacrifice
by Scoti Domeij

After Trump’s State of the Union, I posted on Facebook: “It’s a sad commentary when politicians refuse to stand to honor Gold Star Families.” The first commenter posted: “Trump disrespected ANOTHER gold star family?” My amazing daughter-in-love posted: “Democrats refused to stand when President Trump honored a Gold Star family.”

Gold Star Mothers, Who Are We?

We’re the group no one wants to join. Gold Stars argue among themselves as to what an ‘official’ Gold Star parent is and who isn’t ‘official.’ Here’s the compassionate definition I wrote for our Gold Star chapter that doesn’t exclude any parent who’s suffered the traumatic loss of their child: We are mothers, stepmothers, and adoptive mothers whose sons and daughters died while serving in the military. Their deaths were due to—killed in action, training accidents, homicide, suicide, sudden illness, toxic exposure, accidents, terrorist attacks, and other causes of death related to their military service.

After WW2 everyone knew what a Gold Star family was because so many Americans served in that war. Not one American life was untouched by that war. Today, only .4% of Americans volunteer to serve in the military and of that 4%, 60% come from the SAME families. So what does that say about the 99.6% of Americans who enjoy the freedoms provided by so few?

My CAO, (Casualty Assistant Officer) assigned to me by the Army, showed up at my door 9 hours after I was informed of ‘the news’ to help me navigate the first few months. My CAO introduced me to other Gold Star family members. Like the majority of Americans at that time, I’d never heard the term “Gold Star” and didn’t know what a Gold Star family meant.

To me, Trump’s kneejerk sound bite on Saturday, July 30, 2016, reflected a stereotypical view many Americans held regarding Muslim wives: “If you look at his wife, she was standing there. She had nothing to say. She probably, maybe she wasn’t allowed to have anything to say. You tell me.” In a statement released later on that same Saturday, Trump praised Mr. Khan’s son, who was killed serving in Iraq: “Captain Humayun Khan was a hero to our country and we should honor all who have made the ultimate sacrifice to keep our country safe.” I suspect Trump received a quick education as to what a Gold Star family is.

Politicians color our sacrifice for their political agendas. As with all Americans, Gold Stars hold differing political views and vote for different parties and candidates. However, I get pretty irritated when non-Gold Star individuals speak for Gold Stars, rather than asking us what we think or feel about a situation where we’re politicalized. I’m very grateful when either political party honors and shows their respect for our unending, painful sacrifice.

However, I will say that Candidate Clinton was not unaware of who Gold Star Families are, and that’s why Khan was on stage that night at her convention. When Clinton contacted our Gold Star chapter’s president to see if we wanted to stand behind her for a media photo-op, I was informed that most of our members responded in anger. Why? One word: Benghazi. We know the character of our warriors. Many Gold Stars don’t believe that a former Army Ranger, who fought that night, would lie about what Clinton denied happened.

When Kristoffer was killed, a ton of media attention honored Kristoffer. However, that attention also super-ramped up my adrenaline and stress level to near unbearable levels. When cowboy hat lady, the Florida, Democratic representative, inserted herself into a Gold Star wife’s life, I was enraged. I just wanted to protect that Gold Star wife who’d just learned her worst fears had come true. At the most vulnerable time in that Gold Star wife’s life—when her husband and children’s father was killed—I wanted to protect her. But NO—cowboy hat lady continued to stir her media pot and inflict more unnecessary pain on that Gold Star wife (IMHO), because of cowboy hat lady’s self-professed hatred of Trump. The Democratic Senator from Colorado, Mark Udall, contacted me and did so in private. Senator Udall was so kind and thoughtful. He didn’t make a media spectacle out of me for his personal political agenda.

Cowboy hat lady reported to the media that Trump said: “He knew what he signed up for, but I guess it still hurt.” [Right now I’d like to insert a Ranger expletive]: H-E-double hockey sticks, those who serve say, “I know what I signed up for,” or “He knew what he signed up for.” I had a ton of people say that statement to me when Kristoffer was killed, but I didn’t go ballistic or take offense, because that statement is true. When these young men sign up, they must to write their will and choose where they want to be buried.

Proud to Be An American—No Matter Who’s President

I attended the 2020 Brand Storytelling event at the Sundance Film Festival. After they premiered our documentary, “Here Am I, Send Me.” I participated in a ‘fire-side’ chat with those who work in the media industry. I asked them to stop using the phrase ‘closure.’ Until the day we die, there will never be any closure for the pain of any child shot down in their prime.

I was swarmed by media professionals, who viewed the documentary, who said—no matter their political persuasion: “Your documentary made me feel proud to be an American.” And last night, there were multiple examples highlighted when the Democrats could have stood to say, “I’m proud to be an American.” But if a 100-year-old Tuskegee Airman can’t prompt a political ‘leader’ to stand and say, “I’m proud to honor the sacrifice of fellow Americans,”—what will?

As a proud American, I cried when one of the last surviving Tuskegee Airmen, Charles McGee, stood beside his great-grandson who wants to join the .4% to serve our country. As a single mother who worked 2-3 jobs to support my family, I cried when that precious African-American single mother found out her child could attend the school of her choice. As a mom whose son never returned home alive from the battlefield, I cried when that military family was reunited with their husband and father. As a pro-life mom, who believes that all life is a precious gift from God, I cried when Ellie Schneider hugged her precious daughter who was born at 21 weeks and six days and is now a healthy two-year-old.

My friend, Dianna Steele, CEO of an anti-sex trafficking organization, posted: “They also remained seated through lowest unemployment in history, prison reform, opportunity zones in impoverished neighborhoods, putting America first, permanent funding for black colleges, 60% lower cost for healthcare plans, NINE pieces of legislation to combat sex trafficking, and banning late-term abortions. But they stood and clapped for free Internet, extending paid family leave, and the One Trillion Tree Initiative. I could have tolerated them remaining seated for any of the things I listed. Haters gonna hate. But anyone who refuses to stand and honor Gold Star Families, I cannot abide that. They have no soul.” Her comments prompted this response: “DiAnna Steele you need to fact check ALL of his claims, from the economy, social security, healthcare, unemployment, and on and on. ALL LIES. He’s a disgrace (her spelling).”

My friend, who’s no shrinking wallflower, fired back: “I did not vote for the man. Nor do I simply trust what comes out of his mouth. I have been fact-checking Mr. Trump’s claims for 3 years. If you had done the same you would realize that the liars are the mainstream media and politicians who oppose him for not promoting socialist agendas. If the President’s statements were all lies as you insist, then so too are the FBI stats on crime, the US Dept of Labor stats on unemployment, CBO reports, HHS stats, the budgets P & L’s of black colleges… Take off the blinders, do your homework and lose the bitterness.”

Too bad our politicians and the media, who live and breathe by a code of bitterness, do not understand the code of the fallen: “Greater love has no one than this: to lay down one’s life for one’s friends,” John 15:13. As another Gold Star mom so aptly posted: “Where does our freedom come from? Our heroes are willing to lay down their lives for all people regardless of political party, race or status. This is a sad commentary.”

Some claim that Trump’s State of the Union was political theatre. I recall Clinton, Bush, and Obama also featuring ordinary Americans at their State of the Unions that made me feel proud to be an American. Shoving political agendas and rancor aside, I say: We could use a few more doses of positive, political theatre from both political parties to remind us of the many wonderful Americans who struggle, who serve others, who sacrifice, but have no voice or access to the media.

Are you, like me, exhausted and disgusted by the incessant insanity of the media and BOTH the parties’ negative snipers—snipe, snipe, sniping? As the proud mother of the Army’s first qualified JTAC evaluator, to all those who label me a ‘loose cannon,’ let me repeat after Disney’s Donald Duck: “Aw, phooey! Aw, nuts!” When I vote in the next election, I may write-in for President that ornery, domestic Pekin duck—Donald Duck—as my protest to the state of our union.