In the fear and chaos that gripped The Ohio State University earlier today, one group of students rose to the occasion.  Major news outlets across the country are reporting that veterans took charge in several classrooms during what appears to be a terrorist attack at the flagship university.

In an incident that has all the makings of a terrorist attack, an Ohio State student rammed his car into a group of schoolmates, then leaped from the vehicle and attempted to murder a number of others with a large knife.

He injured 11 individuals before being gunned down by a local security officer in an attack that reportedly lasted a mere two minutes.

Police have identified the dead suspect as Abdul Razak Ali Artan, a young man from Somalia who was himself a student at Ohio State.

Artan’s alleged attack was first reported as an “active shooter” incident, although it does not appear he ever had a gun. 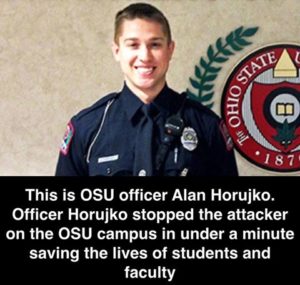 Nonetheless, a number of students sprang into action.  Not surprisingly, students with military experience led the way.  Their willingness to take charge, and to step into harms’ way if necessary, was not lost on their classmates.

We have quite a few military men in our class, who are actually all standing by the doors, keeping us safe,” one Ohio State student said in a phone call while the attack was ongoing. “I’m feeling pretty good about that,” she added.

She should feel pretty good about it, and so should the “military” men and women at OSU. While it’s unclear if the people mentioned are veterans, Active/Guard/Reserve, or ROTC, it *is* clear that there are still, even in the much-maligned “millennial” generation, young people who are willing to stand between good people and evil.

As bad as this incident was, it could have been a lot worse.