HomeNationContemporary AffairsSpecial Forces Officer Jason Amerine Blows The Whistle On Bergdahl And The Obama Administration… You Know What Happens Next. 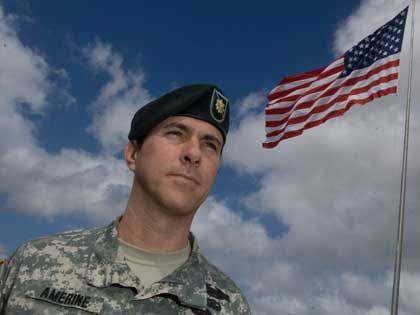 “Let me further make it plain to the assassins in Beirut and their accomplices, wherever they may be, that America will never make concessions to terrorists — to do so would only invite more terrorism — nor will we ask nor pressure any other government to do so. Once we head down that path there would be no end to it, no end to the suffering of innocent people, no end to the bloody ransom all civilized nations must pay.”—President Ronald Reagan 18 June 1985

For many years, at least as far back as the Reagan Administration, modern US leaders have engaged in secret talks with terrorists and rogue nation states alike. These talks include military endeavors, negotiations, bargains, and an array of other matters which includes the release of Americans held captive by terrorists. These conversations contradict a foreign policy established long ago which led to the message entailing our refusal to negotiate with terrorists.

Several Americans have been taken hostage deep inside Afghanistan; Caitlin Coleman and Warren Weinstein are two of many Americans once held captive by our nation’s enemies.

America’s deplorable foreign policy leaders quickly made contact with terrorists in hopes to free our American citizens. Negotiations begun and through those negotiations, large sums of money along with the freeing of captured terrorists were discussed. Yet with each US Government sponsored negotiation, none came to fruition excluding that of Bowe Bergdahl.

Virtually every American who worked inside the Pentagon as an intelligence officer or planner knew about these heinous negotiations. Many were sickened, especially since US Army defector Bowe Bergdahl gained his freedom via such negotiations.

Military and government officials stood silent about these negotiations per the orders and secrecy they are required to maintain. However, one man, when approached by an elected Congressman, Rep. (CA) Duncan Hunter, spoke as requested about such matters.

Lt. Colonel Jason Amerine, a US Army Special Forces planner, did exactly as any good soldier should. When asked about specific information, he provided it to a superior—in this case, Rep. Duncan Hunter.

Many of us have witnessed “dog and pony” shows while abroad in combat environments. We have seen high ranking military officials, Congressmen, Senators, and even Presidents show up to our areas of operation. We look at such individuals as our superiors and treat them as such. When asked a specific question, we answer to the best of our ability, and truthfully.

Today, answering to the best of our ability and truthfully can and will place you under an investigation, forfeit your salary, delay your retirement, and potentially lead you to a prison sentence. That is exactly what is happening to Lt. Colonel Jason Amerine.  It’s a sad commentary on our military and on the Obama administration when a legitimate whistleblower and war hero like Amerine has his paycheck stopped by the Army based on a mere allegation of legitimately providing information to a US Congressman, but a traitor like then-Bradley Manning got paid all through his trial.  Even a deserter like Bowe Bergdahl still manages to get paid to this very day.  What does that say about our nation’s priorities?

Lt. Col. Amerine knew about the ridiculous negotiations unfolding abroad. He knew of alternative measures that could expeditiously, and safely, free US citizens. He revealed this information to a superior in an appropriate—and based on what we know, legitimate—manner.  Unfortunately, today, he became a target by the US Army and its cowardice leaders who will do anything to stay in the graces of the Obama Administration.

Simply put, Lt. Col. Amerine did what anyone of us would do should a US elected official approach us with questions. Now, he is being persecuted as a whistleblower.

Here is your chance to do something profoundly good today. Lt. Col. Jason Amerine sacrificed much in service to our great country, and now finds himself needing your help. What was his “crime?”  He told the truth to Congress when asked directly. Please visit the link below and give him your support.