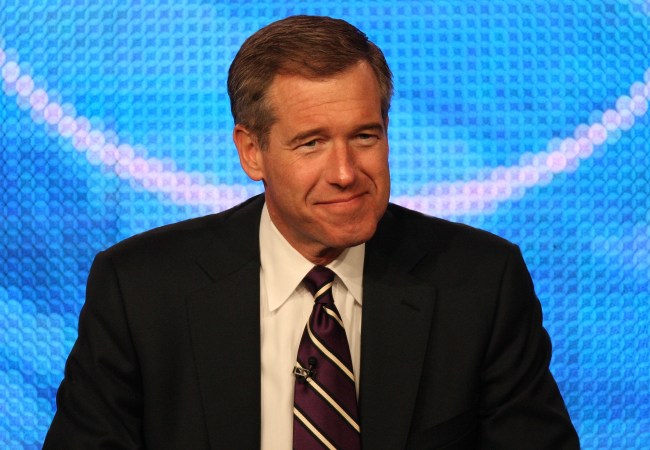 A graduate of MSU (Make Stuff Up), Williams earned his advanced graduate degree in “Insert Myself into the Story” and a traveling fellow from the Dan Rather School of Fictional Journalism. NBC News launched an internal probe into the Emmy-award winning ‘I-see-dead-bodies-floating’ reporter, Brian ‘Dysentery Doug’ Williams, even though he ‘apologized’ for his ‘mistake’.

How exactly does “I would not have chosen to make this mistake,” admit to anything? I’ve got news for Dysentery Doug, his talking-crap apology (a.k.a. excuse) masquerading as false selective memory syndrome is N.O.T. an apology. His apologetic rationalization? A L.I.E. He wasn’t flying in a Chinook behind the helicopter hit by an RPG. Not even in visual distance. He did fly in a helicopter flying AN HOUR behind (#still lying).

And speaking of behinds, if he’d lie about dysentery, what stopped him from lying about other crap? How many other moments of dysenteric FOG has he experienced in the last twelve years that’s clouded the truth? Look, as the first female in Seal Team 9, we had this saying, “Never, ever lie about military experience. It`s insulting to those who have served, and you will always get caught.”

A ‘mistake’ is forgetting an exact date. Military action that never happened? A plain lie. His only mistake? Being found out for embellishing his version of his truth/delusion. I need to confess right here and now . . . I misremembered about earning a spot on Seal Team 9. However, I did rescue a baby duck from drowning. As best as I can misremember, I plucked my yellow rubber ducky out of the depths of my claw foot bathtub and placed it in the soap dish. Now I’m not trying to steal the valor from any true duck rescuers. After all, mistakes happen.

Dan Rather — of infamous Memogate, ‘Kill’ian forged documents fame — jumped to the NBC’s corporate spokesmodel’s defense: “I don’t know the particulars about that day in Iraq. I do know Brian. He’s a longtime friend and we have been in a number of war zones and on the same battlefields, competing but together. Brian is an honest, decent man, an excellent reporter and anchor — and a brave one. I can attest that — like his predecessor Tom Brokaw — he is a superb pro, and a gutsy one.”

A ‘gutsy one’, no doubt. Brian, who reported on Katrina, his gut and his dysentery “in a very special edition of ‘The duPont Talks’,” at The Columbia School of Journalism: “My week, uh, two weeks there, was not helped by the fact that I accidentally ingested some of the floodwater. [When the body floated by on dry land, what did he do? Sample the flood waters?] I became very sick with dysentery, our hotel was overrun with gangs, I was rescued in the stairwell of a five star hotel in New Orleans by a young police officer, we are friends to this day and, uh, it just was, uh, it was uh, I look back at total agony.” Ah . . . Saving Private Brian . . . another uniform to the rescue.

Sidenote regarding Katrina-related dysentery: The CDC reported some diarrheal disease, but N.O. dysentery, an infection of the intestines resulting in severe diarrhea with the presence of blood and mucus in the feces. Show me the blood, Dysentery Doug. 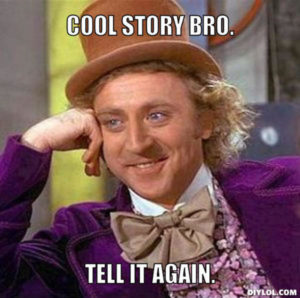 And in another segment of the interview series at Columbia, the NBC (Nothing But Crap) anchor declares: “When we do what we do what we do for a living — well — when we have a good day and good outing and it coincides with a big story to cover — there’s nothing like it . . . for a news junky the internet is a blessing and a curse . . . the thing that has allowed me to hold the lead . . . is that I think brand names win. I think established comfortable places that you know aren’t going to lie to you, or yell at you, or share opinions, especially in the kind of supernova theory of media. I think those places are still in vogue, because they are known commodities . . . We always joke that people can use your words to say whatever they want, and I’m here to say that’s true.”

And now who’s the joke ‘known commodity’ #brianwilliamsmisremembers? The straight-faced, talking-head news junky who lies, says whatever he wants, has a rich history of #BrianWilliamsMemories to share on throwback Thursday. Gotta love “Author by Day; Blogger by Night/Always Certain; Not Always Right,” Dixie Swanson @DixieSwanson1 #BrianWilliamsMisremembers: Haven’t had this much fun since Dan Rather went to Afghanistan and became “Gunga Dan.”

Hey, old ‘brand name’ guy, you don’t get it. Before the World Wide Web, if you repeated a lie long enough, it became accepted as an unchallenged fact. It’s the age of information. The pre-internet days of telling flat-out lies going unchallenged are O.V.E.R. The Internet gives normal people with half a brain the ability to call out lies made by embellishers masquerading as journalists in the big supernova media complex that’s “still in vogue.”

When asked at the Newsweek’s Executive Forum, “How has the Iraq war coverage by the mainstream media caused a distrust of the ability of the media to give us the real news?” Williams snarked back to the “questioner who chose not to sign this.” Williams conferred the title of a “part-time veteran” upon himself and shared his war curriculum vitae: flying commercial on Jordanian Airlines, corkscrewing into Bagdad on a commercial flight to avoid the Sam missiles and wearing body army on the ride to the hotel of his choice. According to Air and Space magazine, “For frequent fliers, the spiral descent actually has aesthetic advantages. ‘Coming in on a corkscrew affords a great view of Baghdad and of the airport.’”

In a day and age where what you say on social media, TV and YouTube reaches all corners of the globe at nanosecond speed, Williams kept telling new versions of his story and thought he could get away with it — being a public figure, war hero, part-time Vet and all.