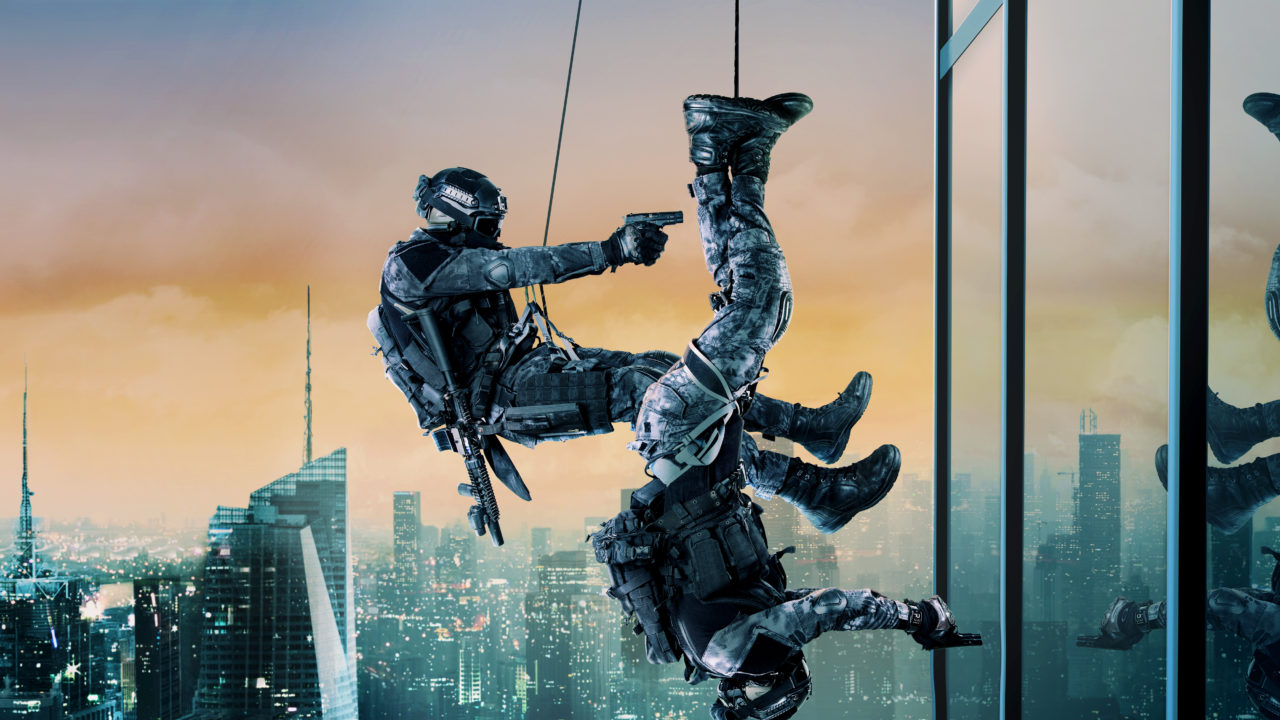 Therefore, just as water retains no constant shape, so in warfare, there are no constant conditions. ~ Sun Tzu, The Art of War

Let me state this upfront: As a former Counterterrorist Operator, a member of the FBI’s elite Hostage Rescue Team (HRT), where I proudly served from 1997 to 2001, I am concerned.

The Islamic State has incontrovertibly changed the hostage game. It’s no longer checkers. It’s chess. We, in the business of staying one step ahead of the hostage-takers, need to adjust, forthwith, to this inevitable evolution in the paradigm of tactical resolution. Human lives are an expendable currency to the Islamic State. But, unlike the calculating and pragmatic hostage-takers of years gone by, these radical Islamist barbarians aren’t seeking to negotiate. And we Westerners ignore this obvious shift in tactics at our own peril. We must adapt. We must evolve. We must learn to play chess. And it’s our move.

Can you hear me?

This is important. Please listen closely.

But before I begin, we must first understand just how we got HERE…

The means with which mankind has waged mortal combat over the course of world history have changed dramatically as the arc of warfighting has consistently and inexorably bent towards more destructive and impersonal means of vanquishing one’s foes. The cataclysmic dawn of the atomic era, denoted by America’s decision to deploy nuclear weapons against Imperial Japan and hasten the end of World War II in August of 1945, ushered in an era of uneasy détente between the two newly created Superpowers, precipitating the onset of the Cold War. The magnitude of destructive potential that nuclear weaponry posed resulted in an uneasy peace delicately secured via a pact of mutually assured destruction. This moved the globe to a stasis, a condition of fragile and tenuous stability.

But this accord of sorts did nothing to bring about peace in the Middle East, a region rife with warring states and diametrically opposed ideologies. So the United States and the Soviet Union conducted proxy wars within countries in Central and South America, parts of Asia, and the Middle East, employing them as pawns in a larger chess game of geopolitical stratagem and influence, indirectly ensuring that a constant war-footing would be maintained, becoming a veritable customary condition of life for peoples in that region of the world in seeming perpetuity.

Many military strategists have also made the case that America’s politically motivated withdrawal from Iraq, hastened by a country weary of war and an Obama Administration often at odds with the advice from its military advisers led to the inability to secure a status-of-forces-agreement with the host nation. Couple this with the 44th president’s somewhat dismissive view of the Islamic State’s — the JV team — rapid rise to prominence in Iraq, Syria, and the Levant and we have the metaphorical perfect storm, which contributed to the sudden and improbable rise of the Islamic State or ISIS.

This assemblage of recruited foreign fighters began to metastasize out of the rubble that was left of Abu Musab al-Zarqawi’s component of al-Qa`ida in Iraq following the successful American Surge strategy in 2007. The decimated gaggle of foreign fighters who had flocked to Iraq to counter the infusion of hated infidels reformed studied the lessons learned from their earlier defeats, and both purposely and methodically began to birth a diabolical and perverted version of their religious orthodoxy. And when they did, they changed the landscape of warfare and of one of its less noble tactics — hostage-taking— in a most heinous and macabre manner.

What al-Zarqawi introduced into the equation of fighting asymmetrical wars in Afghanistan, Iraq, and now Syria, was this: noncombatant civilians, often the victims of atrocities in conflicts, were being rounded up and used as bargaining chips for ransom payments to finance the war effort for the insurgents who had formed the new caliphate. A special prize for the ISIS fighters was the capture of foreign journalists and aid workers, especially if they were Americans. This led to civilians being used as human shields, now recently evidenced by ISIS tactics on full horrific display in areas like Mosul. But what set ISIS’s quest for a caliphate apart from other Islamic terror group or Middle Eastern insurgencies is its raw, naked, sadistic, unrepentant, shock-the-senses barbarism.

What began as a decentralized gaggle of like-minded component parts of resistance fighter enclaves has now morphed into an organization with a centralized leadership structure, a skillful propaganda arm, and visionary torture specialists who have turned every slaughter of an innocent into a spectacular straight-to-internet recruitment video, rife with multiple camera angles, theme music, and on cue calls to prayer — each production more inhumane and repulsive in its recorded inhumanity and sadism.

In 2004, al-Zarqawi introduced the western world to the depravity of this new “warfighting” ethos with the videotaped beheading of Nicholas Berg. The internet soon became inundated with a series of other Westerner decapitations. The symbolism of removing the heads of oppressors became a jihadi rallying cry, and ISIS militants took the depravity to heights heretofore unseen. When Berlin fell to the Allies in May of 1945, a slack-jawed world was left asking just how a murderous fascist like Adolf Hitler could create so many sycophants as he seemingly normalized aggression and genocide. Some seventy years hence, we are still struggling to grasp the enormity of the mind-numbing inhumanity of ISIS and the power of their clarion call, promulgated by its internet recruitment wing, leading to untold conversions and the radicalization of countless rudderless, disaffected, disenfranchised and disillusioned American youth.

But despite being caught flatfooted at the outset, the world is now well aware of the capabilities and sinister motives of the Islamic State and its henchmen. As Leo Tolstoy once mused in comparing the reality of war with the actual killing itself — I was more interested to know in what way and under the influence of what feelings one soldier kills another than to know how the armies were arranged at Austerlitz and Borodino. And the Islamic State has no shortage of maniacal zealots who are less inclined to strap explosives to their torsos in order to achieve martyrdom or worry much about traditional small unit tactics, much preferring to sadistically crucify, drown, immolate, electrify, and decapitate their captives and then exploit the online propaganda in a manner that leaves Josef Goebbels nodding his head in concurrence. But to realize their caliphate, ISIS leaders know that they must take and hold land, lest they remain a short-lived insurgency, never realizing statehood. But with this, the actual “holding of ground,” comes a strategic imperative, and one that also permits the coalition forces aligned against ISIS to fix its ground forces and ruthlessly destroy them.

An insurgency relies on shadows and shape-shifting. A conventional army that wears uniforms and travels in standard military convoys is a target. Conventional fighting is not what the Islamic State can sustain for long, no matter how much oil they have stolen or ransoms they have extorted. They realize that bereft of nuclear weapons and the means to launch them against the West, their efforts to strike against the Great Satan are restricted to inspired terrorist plots against targets within America. And while traditional terrorist organizations plotted their attacks from the relative safety of a cave or remote training camp in Afghanistan, and then assisted their martyrs in travel to America in order to conduct their suicide tactics at the direction of the organization’s leadership, ISIS has recognized the immense propaganda and communication potential of the internet. Their radical message can be heard across the oceans and has seemingly resonated in the hearts and minds of some disconnected, unstable, susceptible to persuasion, and disenfranchised young men and women across Europe and within the United States.

Ergo, our calculus must change as well.

Yet what is frustrating is that America has quite frequently struggled to grasp and fully comprehend the why when someone decides to shoot up an elementary school, take a nightclub hostage and methodically execute its revelers, or wage jihad at a government training event and Christmas party. It is difficult to discern individual purpose with any confidence in causal absolutism. Yes, these Western jihadists often leave rambling manifestos expressing their fealty to a radical cleric or to ISIS or some other terror network. But discussions with some current practitioners of tactical resolution and hostage rescue situations indicate that the consistent theme in many of the departmental post-mortems following the slaughter seems to point to the mental imbalance of the domestic murderers. In doing so, we are dismissing the root cause and we do so at our own peril … check that … we do it at the peril of our children.

We must acknowledge that these new tactics appear to differ from the recent ISIS-inspired murderous rampages in France and Belgium. These attacks on foreign soil often appear to be perpetrated by committed zealots and ideologues, whereas the homegrown radicals that have attempted or been successful in causing chaos and carnage here in the United States, it can be argued, could be placed in the mental illness column. And yes, psychiatrists can certainly define the neuroses or chemical imbalances evident in the brain that can leads toward a predisposition to harm others in any human capable of murdering unarmed innocents. Makes one wonder about that thin line between genius and madness that scientists have determined to be of the same genes.