And so as I traipsed up hill and dale, across expansive ridge lines, and ducked down low into soldier-swallowing ground swales, I couldn’t help shake the symphony in my head. Humming bars from Randy Edelman’s score to the 1993 television movie, the aptly named, Gettysburg, I set out on my mission.

Bloody as that battle may have been, its penultimate result — we’re all Americans now. And with this in mind, Gettysburg must now serve yet another, far more critical, twenty-first century purpose for us.

You see, here in Gettysburg, no one cares whether your ancestors wore blue or gray, whether they were freemen or slave, whether they were physically HERE or still resided in some far off land. One of the only places in our country today where you’re not forced to choose a side. It’s not like being a Yankee fan at Fenway, or a climate change agnostic at an Upper West Side Manhattan cocktail party, or a conservative talk show host invited to speak at UC-Berkeley.

Because in recent years, the State of Texas and the People’s Republic of California have both threatened secession.

You heard that correctly: Secession.

Which makes Gettysburg the single greatest cautionary tale available in 2017 for these Divided States of America. 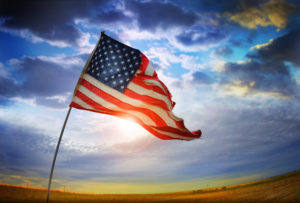 Don’t believe me? Google search some Matthew Brady photos of dead Civil War soldiers at the conclusion of the battle. The Union suffered 23,049 casualties at Gettysburg. For the South, 28,063. That’s a lot of American blood spilled and corpses littered across one parcel of land over the course of just three days.

And it began inauspiciously enough with a few fed up and angry South Carolinians lobbing some rounds at folks they viewed as interlopers and occupiers. They spoke with different accents than the Northerners. They prepared their foods differently. They voted differently at the polling place. And they held diametrically opposed positions related to slavery (race), national budgets, federal oversight, and the rights of states to self-determination.

The first shot of the war was fired by Captain George S. James. Damn them Yankees, he must have thought to himself as he initiated a small engagement that ultimately precipitated a sweeping and bloody four years of civil war.  And think about it — this conflict was made up of strident folks on both sides of every issue — folks…just…like…us…today.

Remember back in 2011 when Tea Party candidate for the U.S. Senate from Nevada, Sharon Angle once (in)famously stated that the American public could counter an out-of-control congress via “Second Amendment remedies?”

Or when Nation of Islam leader Louis Farrakhan uttered these words: “The white man is our mortal enemy, and we cannot accept him.” What?

How about the continual misapplication of MLK’s quote that “A riot is the language of the unheard,” as anarchy, looting, and attacks against the police proliferate in American cities like Baltimore, Ferguson, Dallas, Baton Rouge, and on liberal college campuses anytime a conservative speaker is scheduled to address the student body?

Or when the current president begins his presidential campaign in June of 2015 by descending an elevator at Trump Tower, gliding over to a microphone, and then pronouncing our southern neighbor’s intentions to send us mostly their rapists and murderers, with some, he presumes, to be “good people.”

And who can forget, most recently, the #NotMyPresident Movement that gripped the Left in the wake of Donald Trump’s improbable election last November and when the unhinged clinically diagnosed “Trump Derangement Syndrome” sickness began to metastasize in fully one-half the country?

Or when Madonna advocated “blowing up the White House,” and Sarah Silverman tweeted: WAKE UP & JOIN THE RESISTANCE. ONCE THE MILITARY IS W US FASCISTS GET OVERTHROWN. MAD KING & HIS HANDLERS GO BYE BYE.

Don’t think Gettysburg matters today? It has been almost 154 years since J.E.B. Stuart let Lee down, and Chamberlain led that heroic bayonet charge, and since Pickett followed orders and led his division to its demise.

But Gettysburg matters today more than ever. It proves what can happen when a divided nation is forced into drastic binary choices, with the powder keg being lit by any one of a litany of divisive issues and reckless rehetoric. The North blamed the South for precipitating the war by firing on Sumter. The South forever convinced it was Northern aggression that fueled the fight. And in the end, an estimated 2% of the population, some 620,000 men lost their lives on one side of the issue(s) or the other.

Have we truly learned our lesson? I’m uncertain if we have.

One of NBC’s hottest new television shows this season has been “This is Us.” The show’s intent is to hold a mirror up to real America.

I walked the battlefields of Gettysburg the past two days, imagining the all too real suffering, and sacrifice, and carnage. I then held up America’s mirror which were folded copies of several newspapers I had consumed at breakfast. The reflection I saw in the mirror made me pause and wonder if this — Gettysburg — is to become us again.