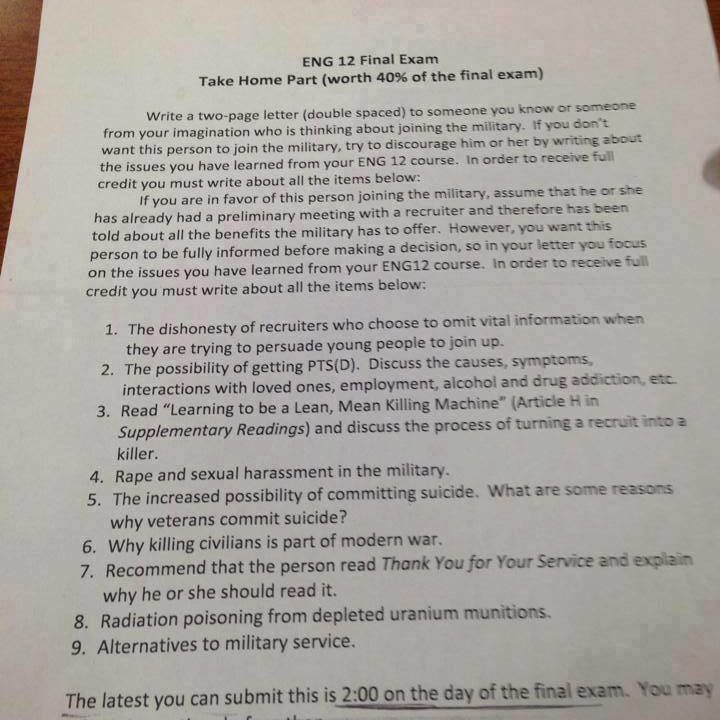 A course entitled “Why the US Military Sucks” was taught last semester at Bronx Community College.  OK, that’s not true at all, the course is actually called English 12 not “Why the US Military Sucks.”  Nor is it called “Why you’re going to get PTSD, murder civilians, rape your peers, and kill yourself if you come anywhere near a recruiter.”  But  if the final exam is any indication, it apparently might as well be. A person claiming to be a student at Bronx Community College (BCC) forwarded us a copy of what he said was the final exam for the English 12 course he took last semester.  The exam, sent to us via iPhone, appeared to demonstrate an EXTREMELY inappropriate and possibly even illegal anti-military and anti-veteran bias.

A cropped version of the original photo is shown to the left.  Because of the size of the print and the angle at which the photograph was taken it’s a bit hard to read so we did a rough transcription, which we provided below.  Go ahead and take a moment to read through it, we’ll wait.

Take Home Part (worth 40% of the final exam)

Write a two-page letter (double spaced) to someone you know or someone from your imagination who is thinking about joining the military.  If you don’t want this person to join the military, try to discourage him or her by writing about the issues you have learned from your ENG 12 course.  In order to receive full credit you must write about all the items below:

If you are in favor of this person joining the military, assume that he or she has already had a preliminary meeting with a recruiter and therefore has been told about all the benefits the military has to offer.  However, you want this person to be fully informed before making a decision, so in your letter you focus on the issues you have learned from your ENG 12 course.  In order to receive full credit you must write about all the items below:

1.  The dishonesty of recruiters who choose to omit vital information when they are trying to persuade young people to join up.
2.  The possibility of getting PTS(D).  Discuss the causes, symptoms, interactions with loved ones, employment, alcohol and drug addiction, etc.
3.  Read “Learning to be a Lean, Mean Killing Machine” (Article H in Supplementary Readings) and discuss the process of turning a recruit into a killer.
4.  Rape and sexual harassment in the military.
5.  The increased possibility of committing suicide.  What are some of the reasons veterans commit suicide?
6.  Why killing civilians is part of modern war.
7.  Recommend that the person read Thank You For Your Service and explain why he or she should read it.
8.  Radiation poisoning from depleted uranium munitions.
9.  Alternatives to military service.

The latest you can submit this is 2:00 on the day of the final exam.  You may submit it any time before then.

Pretty interesting, right?  Feel your blood boiling a little bit when you read it?  We sure did.  Now, according to BCC’s own course description students in English 12 “Study and application of the principles of organization, rhetoric, and literary analysis; expository writing and research based on thematically linked readings; development of critical thinking. Research paper with MLA documentation required.” (emphasis added) “Thematically linked readings?”  What “theme” for an introductory English course focuses on every possible thing that is wrong with the US military?  Our guess is that the “theme” of ENG 12 at BCC is military-bashing with a healthy dose of far-left political rhetoric.  Stay classy, BCC. 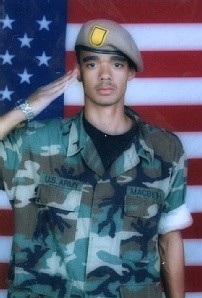 We couldn’t find an online version of the syllabus or the course readings, but we were able to look up the two readings listed on the final exam.  The first, “Learning to be a Lean, Mean, Killing Machine,” is nothing more than a quasi-Marxist rant, bereft of any critical analysis or objective reasoning.

Moreover, the author of “Lean, Mean” proudly affiliates himself with Iraq Veterans Against the War, a fringe and thankfully waning anti-military movement perhaps best known for burning US flags, assisting war resisters (AKA military deserters), and promoting conspicuous fakers like Jesse MacBeth as public faces for the group.   The author of the piece is also credited as being “retired,” a near-impossibility as he only served a total of five years in the Marines.  Well, at least IVAW and related sites are consistent in their (lack of) fact-checking.

We, however, take fact-checking seriously, so as part of the due diligence research we do before writing an article like this, we contacted the head of BCC’s Department of English, Dr.  Robert Beuka.  To our surprise, and to his credit, he responded immediately and candidly to our email.  He confirmed the authenticity of the exam, and informed us that it was in fact utilized in an ENG 12 course at BCC.  He further explained that after a veteran complained about the exam, that it was replaced with a different one and that this situation was “resolved to the satisfaction of our Veterans Services Office.”  We’ll be following up on that later, but for now we’re taking Dr. Beuka at his word, and appreciate him responding to our initial query.

Great; so this exam got tossed out.  But how did a college professor think that something like this was even in the realm of acceptable behavior in the first place? Is this what really passes for taxpayer-assisted higher education these days?

Well, apparently, harassing and discriminating against the military community has been standard behavior at Bronx Community College for some time now.  In a school where students proudly take credit for regularly harassing military recruiters, is it any real surprise that that the professors feel comfortable enough to come up with a final exam that no reasonable person would think has the SLIGHTEST whiff of objectivity? 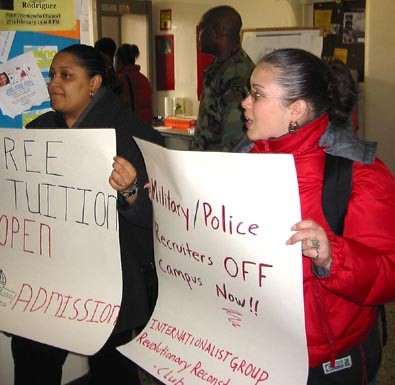 What are the veterans who take that class going to think when they look over the syllabus for a required class, knowing they have to take it in order to graduate, and then seeing how much of an anti-military agenda the professor has?    How are they expected to retain the slightest iota of dignity when their professor, and more than likely their entire class, is so clearly and irresponsibly against everything that veterans stand for?  They can’t.

Not only is a veteran’s dignity at stake, his or her grade is likely in jeopardy as well in the face of this kind of bias.  For a veteran population already marginalized by mainstream America, with military suicides at an all-time high, and with so many veterans suffering in silence from a variety of physical and mental ailments, how is something like this even possibly OK?

The answer is, or at least should be, this is decidedly NOT OK.  There is no room whatsoever in this ‘exam’ for anything approaching the “critical thinking” that this course supposedly requires.  If a student in this course wants to pass ENG 12, a course required for graduation, he or she apparently has to suffer through an entire semester of ulterior-motive-driven, anti-military rhetoric, culminating in an exam conspicuously and deliberately designed to portray the US military, and those who serve in it, in the absolutely worst possible light.

The professor who came up with this exam should be fired, and the department head should take appropriate steps to ensure that something like this NEVER happens again.  Where is the accountability?  Where is the course validation?  What passes for objective, critical thinking at Bronx Community College?  Unfortunately, at this point we still have more questions than answers.

We firmly agree that there should be nothing above criticism, especially in a college classroom.  Not everyone has what it takes to serve in the military, and there are many professions and life paths that are critical to the long-term success of our nation.  The US military also has its share of issues, and it is good to shine a spotlight on those.  We firmly believe in ALL of the rights guaranteed under our Constitution; students have a right to protest, and professors have the right to their own opinions.  But veterans are people too, and they have rights as well.  Not the least of these should be the reasonable expectation that a college English class they have to take to graduate isn’t going to serve as top cover for someone’s thinly-veiled political agenda.

In order for ideas to compete in the free marketplace of ideas, which should be what college is all about, ALL SIDES of an issue should be studied, not just the ones that the person in charge of the class finds politically expedient.  This ENG 12 exam claims that the test-taker’s imaginary friend needs to be “fully informed” about a career in the military, yet magically waves away any possible benefits of joining the military, such as national service, health care, a competitive paycheck, camaraderie, the GI Bill, and helping the troubled people of the world in times of disaster, disease, or war.  It also ignores how a military career is a ticket into the middle class, something that was certainly of issue to us when we were considering life after high school and might be of interest to BCC’s students as well.  Instead it focuses on every bad thing that might possibly happen to any Soldier, ever.  Depleted uranium… seriously?

We say that this exam should never have been given in the first place.  The fact that the teacher was asked to change the exam seems to support our initial assessment.  We’re not experts on the law in New York State, but we’re pretty sure that discrimination against veterans is illegal, and it’s hard to see what’s happening at BCC right now as anything but.  It is our sincere hope that someone with more influence than us can put this situation under a microscope, at BCC or any other institution that propagates this kind of behavior.

At any rate, feel free to check our facts and provide feedback, especially if you’re a veteran who attends BCC or any other school where something similar to the ENG 12 scandal took place.  We’d love to hear from you.  Think we’re wrong with our assessment of BCC?  Let us know!  Think we’re on the money?  Tell us why.  We guarantee we’ll at least listen to what you have to say.

For all of you veterans out there struggling to make it in a world where the chips seem stacked against you—you are not alone, even if it seems like it in the classroom.  Not every place is ENG 12 at Bronx Community College.