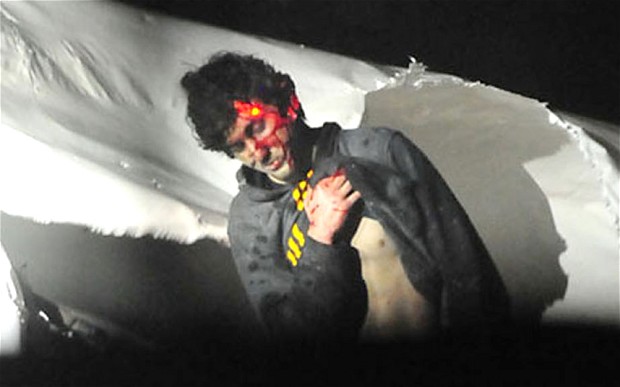 Despite a spirited legal defense that conceded guilt but alternated between focusing on his youth and attempting to shift culpability onto the shoulders of his (dead) older brother, Boston Bombing suspect Dzhokhar Tsarnaev is a “suspect” no longer.  21-year-old Dzhokhar, the younger half of an Islamist-motivated duo of brothers who terrorized Boston during a murderous rampage in 2013, was today convicted of all 30 of the charges against him, and now faces a possible death penalty.

There was never any real doubt about the guilt of either of the Tsarnaev brothers, but older brother Tamerlan didn’t survive long enough to make it into custody and stand trial.  Dzhokhar was arrested after being wounded and holing up in a boat trailered in a Boston back yard.  After writing what he might have expected was a final manifesto in which he espoused radical Islamist ideology and rationalized the murder of civilians, Dzhokhar was discovered and taken into custody.

Jurors were apparently unswayed by the boyish good looks that landed the surviving Boston Bomber on the cover of Rolling Stone magazine, and they did not buy arguments that Dzhokhar was somehow less culpable than older brother Tamerlan.  Prosecutors produced a mountain of physical and electronic evidence, including surveillance footage showing the brothers at the scene of the crime, electronic communication before, during, and after the bombing and ensuing manhunt, and of course Dzhokhar’s bloods oaked and bullet-ridden note recovered from inside the boat.

The next step in the trial is the sentencing phase.  Like many if not most Americans, I am hoping for a death sentence.  To me, and many others, that is the only rational outcome in this situation.   The evidence revealed at trial shows a young man deeply angry at America, and utterly unrepentant about the lives affected by the Boston Bombing and the ensuing rampage.  Dzhokhar Tsarnaev demonstrated that he no longer deserves to live within decent human society.

He sought death for himself and to bring it to others in 2013; perhaps now is the time to finish the job he started.