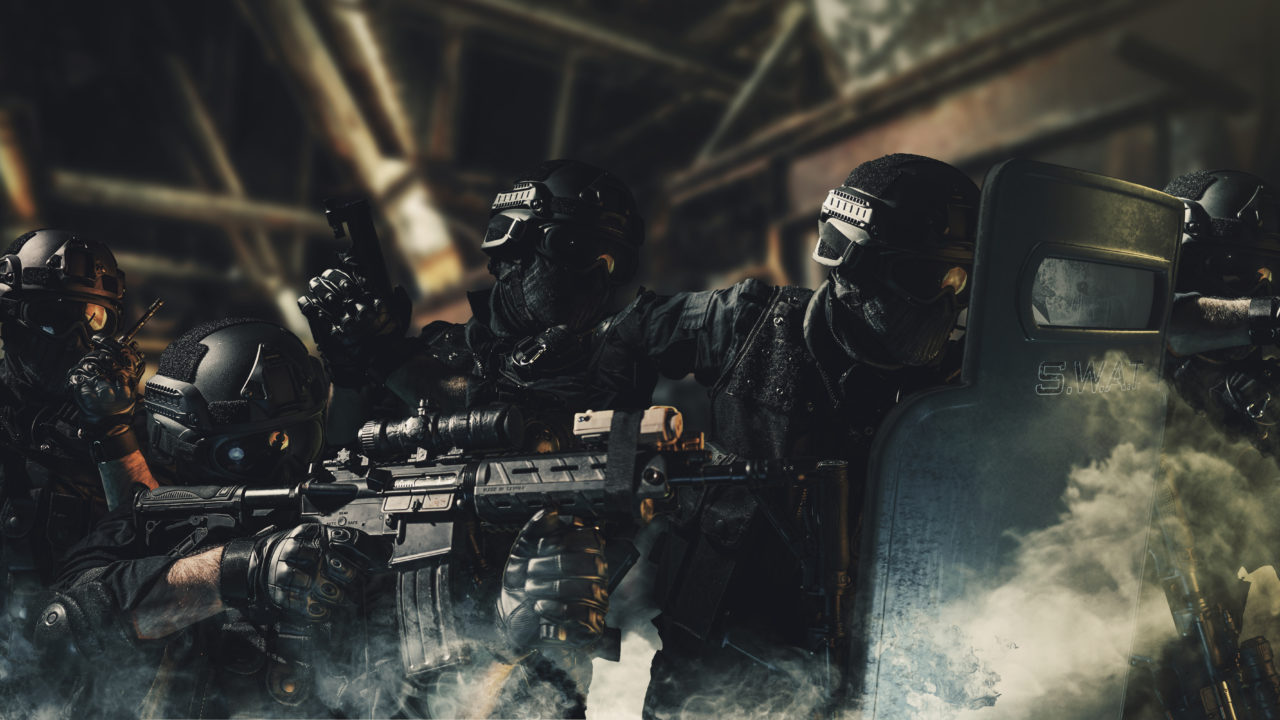 Battle drills, battle drills, battle drills…The Ranger Handbook defines battle drills as a collective action rapidly executed without applying a deliberate decision-making process. An example of this is room clearing. This is done repeatedly to the point it becomes second nature. It becomes a reflex when encountering any resistance, even during something as complex as assaulting an entire building. SWAT teams do the same thing. Prior to taking on an objective, they conduct battle drills until the team is familiar with the upcoming mission.

Let’s take that concept and apply it to the Law Enforcement world. Why is it so important? The police academy is usually 6 months long. In that time one is bombarded with learning about laws, the U.S. Constitution, tactics, emergency vehicle operations, firearms qualifications and so much more. That is typically the last time an officer has any formal lessons and training on tactics and firearms. In the military, depending on the job, a unit would constantly train in tactics, land navigation, and firearms. Each service member in the unit becomes proficient in their jobs. 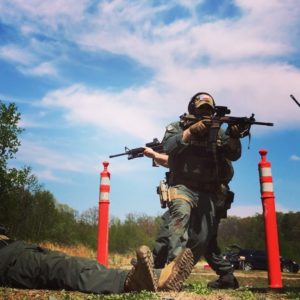 Depending on state, city or town budgets, police departments are usually limited to one or two firearms qualifications a year. They conduct “in-service” training once a year. In-service training consists of re-certifying in CPR, review of tactics, law updates, etc. If the department is able to, conduct tactics training once a year. If an officer is on a specialized team, that officer trains once or twice a year.

“The startle-flinch response deploys like a biological airbag, expanding in a sudden incident to create space between you and the danger.

When a violent stimulus is introduced too quickly, the body’s survival system hijacks executive function. The typical psychological response is to protect the head and then push away danger. Fingers are splayed if the hands are empty and the forearms are outside ninety degrees from the elbow.” – Tony Blauer

The above quote refers to the “reaction” a human has when faced with an imminent attack. MMA fighters, Judo fighters, swordsmen, and competition shooters all constantly train their skills. For a boxer, MMA fighter, swordsmen, their reaction becomes a reflex. The competition shooter spends thousands of rounds a year to perfect their game. By the time they compete, their reaction time becomes a reflex.

Reacting to a threat takes more time. Most car insurance companies, as well as the National Highway Traffic Safety Administration (NHTSA), recommend the “two-second” rule when traveling behind another vehicle. According to NHTSA, “A typical reaction time to perceive a threat, such as a deer or a child running into the road, is about 3/4 second and then you add another 3/4 second to decide to act and move your foot to the brake pedal – that’s 1.5 seconds so far.” 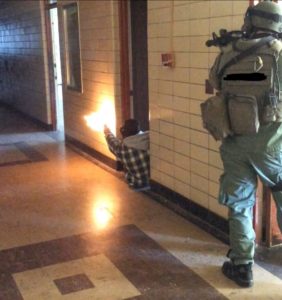 In short, the average human takes about 1.5 seconds to perceive a threat and decide what action to take. There are all kinds of research on the average draw of a firearm from a holster. They all seem to point to the time of 1.5 seconds.

Let’s use an officer conducting an investigation during a domestic violence call as an example. The officer notices the suspect is blading their stance, clenching their firsts. All of a sudden, the suspect lunges at the officer. The officer quickly takes down the suspect and has complete control of the situation. The officer is trained and determined to have the upper hand in as many situations as possible. The officer trains in MMA 2-3 times a week.

Based on the above example, I ask, in order to defend against a physical ambush, should an officer develop his or her fighting skills to become a reflex rather than a reaction? How does the officer become quick on the draw should they encounter an ambush? Battle drills, battle drills, battle drills…Officers must train all the time to perfect their skills. Their survivability increases 10-fold.

SWAT teams train, train, and train. Prior to an operation, the team leaders put together a replica house or target building, constructed from police tape and cones. The team then repeatedly practices their approach, entry, contingency plans, and whatever else they can plan for. They practice to the point that assaulting the target house becomes second nature to the officers.

The teams practice entries, firearms, hostage rescues, armed barricaded suspects, and various other scenarios. They hone their skills, so they become a reflex rather than a reaction.

Is it possible to train a reaction to become a reflex? With practice, yes. One just doesn’t all of a sudden become faster. It takes time, dedication, and discipline. How can an officer achieve this? As a firearms instructor, we always tell officers to practice drawing the officer’s weapon from the holster. If the officer does 200 hundred draws a day, it will become second nature. It will become a reflex because the officer no longer has to think about it. The officer just does it without delay. I can tell at the range who has been practicing the draw, who has been dry firing their weapon to practice trigger squeeze, and who shoots more than the once or twice needed to qualify. This concept can be applied to anything involving law enforcement such as firearm tactics, defensive tactics, and other movements.

It is up to each individual officer to be on top of their game at all times. As an officer, you are a target, especially these days. The officer needs to be faster, more athletic, and tactically sound. This is more than a job; it is a career choice.

This first appeared in The Havok Journal on June 4, 2020.