HomeLaw EnforcementCops Fill the Breach Left by Our Bad Policies 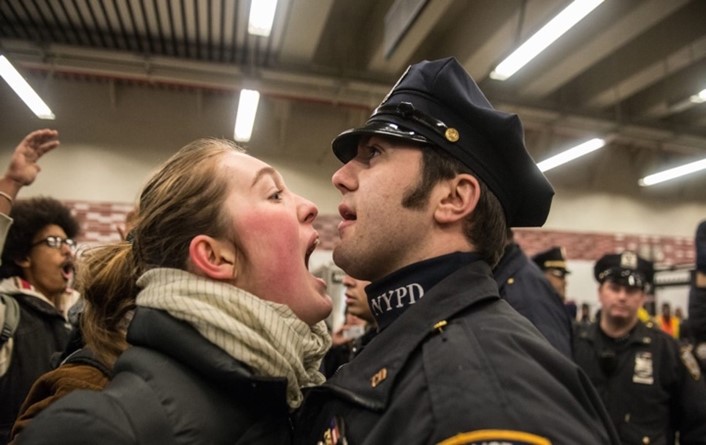 This first appeared in The Havok Journal on April 1, 2021.

What is the difference between the two pictures above? They are in different eras of American history. One depicts protestors during the Vietnam war and the other is a protester in NYC. They both depict the failures of elected officials in Congress. They both depict the tension that America has been building internally for decades in the making. They both depict what it looks like when politicians no longer work for the people. What is happening right now in America with Law Enforcement, resembles how the media and people treated Vietnam Veterans when they returned home.

During an episode on The Weekly Havok, the host Chris Taylor made a statement that got me thinking. He said, and I’m summarizing, Police Officers are being treated how Vietnam veterans were treated during and after the Vietnam war. Think about that statement. Both are victims of a failure in policy. The difference? They wear uniforms. They are out in public. Instead, most politicians pick and choose when they want to engage with the public.

I landed in the U.S. for my two weeks of leave from war back in 2005. I remember standing there, at the passenger pick-up area of the airport waiting for a cab. I was in my Desert Camouflage Uniform (DCU). This woman, older, smug, looked at me and scoffed. She said, “baby killer.” At the time, I was too tired to even give a shit what she said. This is minor compared to Vietnam veterans. For the most part, Global War on Terrorism Veterans are truly loved and hailed as heroes. Vietnam war veterans were spat on, called names, etc. There were protests and riots…does this all sound familiar?

The media, certain politicians, and groups painted a broad picture of the Vietnam war, just like the broad picture that has been painted of law enforcement in America. There is a saying, if you tell a lie long enough it becomes the truth. In this case, cops are racist, cops are bigots, cops target only people of color, cops only kill people of color and the list goes on.

Let’s look at how Vietnam veterans are being treated now. The public has realized that the veterans were only doing their jobs. The public shifted their focus to the politicians of the time and the failed policies that were put in place.

I remember clearly one officer, a middle-aged white man, who is now a sergeant with the department, looking me dead in the eye and cursing me out in front of the entire room. I needed to take a walk in their shoes, he said, peppering his insults with profanity, so that I could “know what that’s like.” He complained of protesters’ “calling us names, getting in our faces” and throwing objects at officers. And “you’re letting them,” he said.

“The not fully said bottom line of his message was clear: White liberals like me ask the police to do our dirty work — dealing with the racial and economic inequities our policies create. Normally, we turn a blind eye to the harsh methods that many of them use to achieve our goal of order, pretend that isn’t what we’ve done, and then act surprised when their tough-guy behavior goes viral and gets renewed scrutiny.

Whatever else you want to say about police officers, they know — whether they articulate it neatly or not — that we are asking them to step into a breach left by our bad policies. The creation of more-just systems won’t guarantee the prevention of atrocities. But the status quo in cities, created by white liberals, invites brutal policing.”

Ms. Hodges stated it perfectly. Certain policies and laws created by politicians put the police in a situation of instead of building community relationships, they force police to be the hammer rather than true peace officers. During the justice department investigation into the Ferguson Police Department, “City officials have consistently set maximizing revenue as the priority for Ferguson’s law enforcement activity…City and police leadership pressure officers to write citations, independent of any public safety need, and rely on citation productivity to fund the City budget.

In an email from March 2010, the Finance Director wrote to Chief Jackson that “unless ticket writing ramps up significantly before the end of the year, it will be hard to significantly raise collections next year. What are your thoughts? Given that we are looking at a substantial sales tax shortfall, it’s not an insignificant issue.” Chief Jackson responded that the City would see an increase in fines once more officers were hired and that he could target the $1.5 million forecast.

Significantly, Chief Jackson stated that he was also “looking at different shift schedules which will place more officers on the street, which in turn will increase traffic enforcement per shift.” This was a clear example of how city officials failed their citizens in every sense of the word. Using police to generate revenue for the city is the absolute worst method of policing. Police Officers are not there to generate revenue for the city, they are there to foster community partnerships, protect and preserve life, charge individuals criminally when appropriate, and the list goes on.

So, when a major incident occurs, because of poor policies, politicians quickly point their finger at who, the police, the military, whoever they decide is the scapegoat. Let’s be frank for a minute. On a national level, statistics show that 120 negative police videos are posted in a year. In one year though, it is estimated that there are approximately 900 million police contacts per year. The true percentage of the negativity is .000013 percent. Let that soak in.

These days a cop has to deal with a multitude of problems in our society. Most of it has to do with a failed mental health industry. Especially after the COVID Pandemic. I have personally seen the breakdown of the mental health system. We are dealing with far more emotionally disturbed persons (EDP) than before. In the city I work, I had to involuntary commit three EDPs to the local hospital in one day. I have never done that in my career. I have friends in the profession talking people off of rooftops. Police have to wear multiple hats when they get to their calls. They have to be a social worker and police officer in less than a second and be able to decide that split second.

I have said it before and I’ll say it again, the anger and hate towards law enforcement is the sign of a society falling apart. When an officer goes to get coffee, the officer is hypervigilant. The officer worries if the server is going to spit in their coffee or food. Both law enforcement officers today are getting treated like Vietnam veterans in the 60s. The police have become the enemy of the people. Politicians use officers as scapegoats for their failed laws and policies.

The public takes it out on the police because they are the face of the government. They are the ones out there on the streets. Maybe one day the public will realize it. But by then, we may be left with very few good cops and be left with those who just want a check at the end of the day and could care less about the community.