HomeCultureSpecOps Doc: It’s Better to Get Shot with an AK-47 Than an M4/AR-15 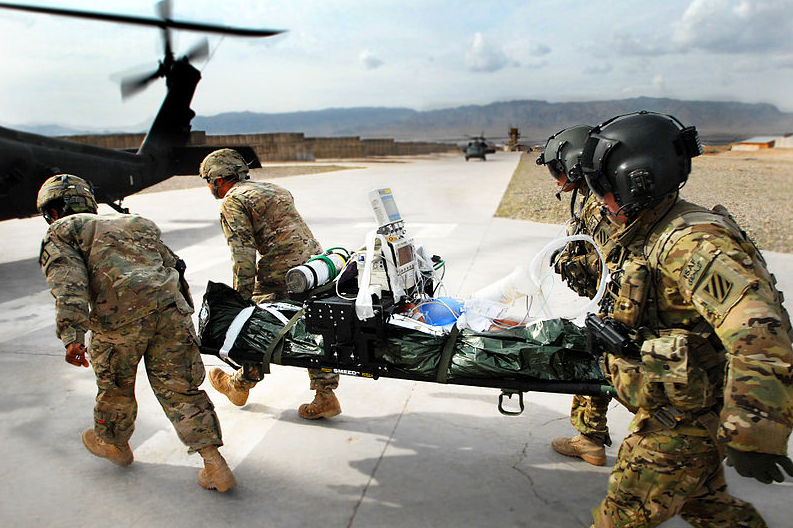 Editor’s Note: Dr. Dan Pronk is an Australian medical doctor who spent much of his time in the Australian Army assigned to Special Operations units.  This article first appeared in the TacMed blog, and later in several other blogs, and is re-posted here with the permission of the original author. WARNING: Some of the images in this article reflect real-life gunshot wounds.

Admittedly I’d rather not be shot with either, but if I had to choose, I’d take a round from the AK47 over the M4 any day of the week. To understand why, it’s important to have a very basic look at the physics behind terminal ballistics, in this case, the science of what happens when a penetrating missile enters a human body. The first place to start is the Kinetic Energy Equation:

Breaking this equation down into its components, we have Kinetic Energy (KE) influenced by the Mass (M) of the penetrating missile, as well as the Velocity (V) of the missile. This makes sense, and it is logical that a heavier, faster missile is going to do more damage than a lighter, slower missile. What is important to understand is the relative influence that Mass and Velocity have on Kinetic Energy, as this is key to understanding why I’d rather be shot by an AK than an M4.

You’ll notice that the Mass component of the KE equation is halved, whereas the Velocity component is squared. For this reason, it is the Velocity of the projectile that has far more bearing on the energy that it dissipates into the target than the mass.

The V1-V2 component of the equation takes into consideration that the projectile might actually pass straight through the target, rather than coming to rest in the target. In this instance, the change in the Velocity of the projectile as it passes through the target (V1 being its velocity as it enters, and V2 being velocity on exit) is the factor that is considered when calculating how much energy the missile delivered into the target.

Naturally, if the projectile comes to rest in the target (ie: no exit wound) then V2 equals zero and the projectile’s velocity as it entered (V1) is used to calculate the KE.

That’s enough physics for now, but you get the concept that the optimum projectile to shoot someone with is one that has a decent mass, is very, very fast, and is guaranteed to come to rest in your target, as to dissipate as much energy as possible into them, and hence do maximal damage.

The next concept to grasp is that of permanent cavitation versus temporary cavitation. Permanent cavitation is the hole that gets left in a target from a projectile punching through it. You can think of it simply as a sharp stick being pushed through a target and leaving a hole the diameter of the stick. The permanent cavity left by a bullet is proportionate to the surface area of the bullet as it passes through the tissue.

For instance, if an AK47 round of 7.62mm diameter at its widest point passes cleanly through a target, it will leave a round 7.62mm hole (permanent cavity). If this hole goes through a vital structure in the body then the wound can be fatal, however, if the bullet passes through soft tissues only then the permanent cavity can be relatively benign. This is a slight oversimplification of the concept, as bullets will rarely remain dead straight as they pass through human bodies, as they have a tendency to destabilise, and for the heavier back end of the bullet to want to overtake the front. This concept, known as yaw, increases the frontal surface area of the bullet as it passes through tissue, and hence creates a larger permanent cavity.

Far more damaging than the permanent cavity left by a projectile is the temporary cavity that it creates. Anyone who has ever watched the TV show Myth Busters will have some familiarity with this concept, and it is best demonstrated using slow-motion video imagery of bullets being shot into special jelly known as ballistic gelatin, which is calibrated to be the same density as human soft tissues. What can be seen in these video images is the pulsating dissipation of energy that emanates out from a bullet as it passes through the gelatin.

This is a visual illustration of the concept of temporary cavitation, and it allows the viewer to begin to appreciate the devastating effect that a high-velocity missile can have once it enters a human body. The temporary cavitation is the transfer of Kinetic Energy from the projectile into the tissues of the target, and as we learned above, is relative to the mass and, more importantly, the velocity of the projectile.

As the energy of the projectile is dissipated into the tissues of the target the temporary cavitation pulverizes structures adjacent to the bullet’s tract, including blood vessels, nerves, muscles, and any solid organs that may be in close proximity. For that reason, the high-velocity projectile does not need to pass directly through a structure in the body to destroy it. The higher the Kinetic Energy of the projectile the further out from the permanent cavity the temporary cavity extends.

Below is a slow-motion video of a 5.56x45mm round (same as the M4 fires) hitting ballistic gelatine in slow motion. After watching, the medical provider can begin to appreciate the damage that gets done to tissues by the pressure wave of the temporary cavitation.

Having had the chance to treat dozens of high-velocity missile wounds over my years in the military, I’ve seen first-hand the effect that various calibre rifles can have at various distances, hitting various body parts.  On the next page are two examples that I was involved with illustrating somewhat of a comparative study of an AK47 round and an M4 round striking roughly the same anatomical location, and from roughly the same range (in these cases 150-200m).