HomePoliticsNationalNot to Defend Joe Biden, but an “AR-14” is a Real Thing

Joe Biden doesn’t need me to defend him. The heir-apparent to the 2020 Democratic Presidential candidacy has millions of supporters across the world and millions of dollars in his campaign coffers. I’m just a nobody with a popular military-themed blog.

And it’s good that Joe doesn’t need me because he says and does a LOT of really stupid things. Self-inflicted wounds. Own-goals.  Real head-scratchers. Take your pick. If I was a Joe Biden supporter, I think I’d be hard-pressed to defend him from all of the things he gets himself into. At the same time though, lots of politicians that I do support say things that are… unfortunate… as well, so that’s not something that’s unique to the Biden candidacy.

Mr. Biden shot himself in the foot most recently during a loud argument with a Detroit autoworker over gun rights, where Biden can be heard explaining that no one was going to take the man’s “AR-14.”  Clearly, Mr. Biden meant “AR-15,” the kind that the guy he wants as his gun-control czar enthusiastically says that he’s going to take away from law-abiding Americans. But he said what he said, and the Internet roasted Biden on the gaffe… and Biden’s profanity-laced tirade.

I got to wondering, though, if there might actually be an AR-14. For example, I know there is an AR-10, and an AR-15, so it would seem logical that there was an AR-14… and maybe a -13, -12, and -11, too for that matter. A short Google search later and it appears that there is, in fact, an AR-14. By the way, this isn’t it, it’s just a funny meme I’m using to draw attention to this article and to make fun of people who react to the photo and headline without bothering to read the article:

On a side note, I think I’d totally buy something like the imaginary “gun” shown above. That doesn’t mean it’s an AR-14, though.

For those of who actually read an article before making embarrassing comments about it, this, apparently, is Armalite’s AR-14: 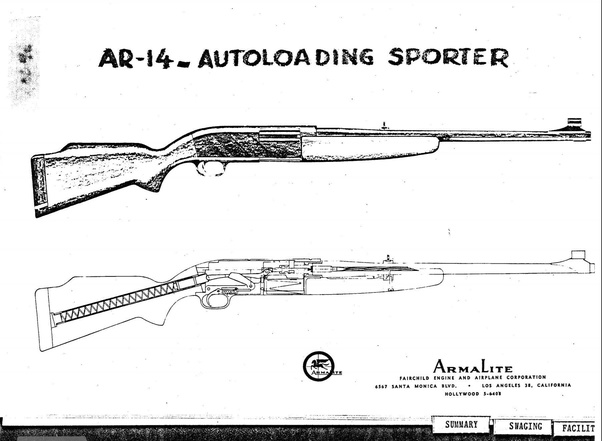 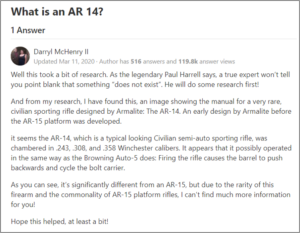 So yeah, Joe Biden got some things wrong in that exchange in Detroit. He gets a LOT of things wrong, especially about guns. I’m especially thinking about his laughable admonition a few years back to “buy a double-barrel shotgun” instead of an AR because a shotgun is easier to handle, and to fire warning shots if you feel threatened. (umm… wut?) In the case of the AR-14, though, he wasn’t completely wrong, even though he probably didn’t know it.