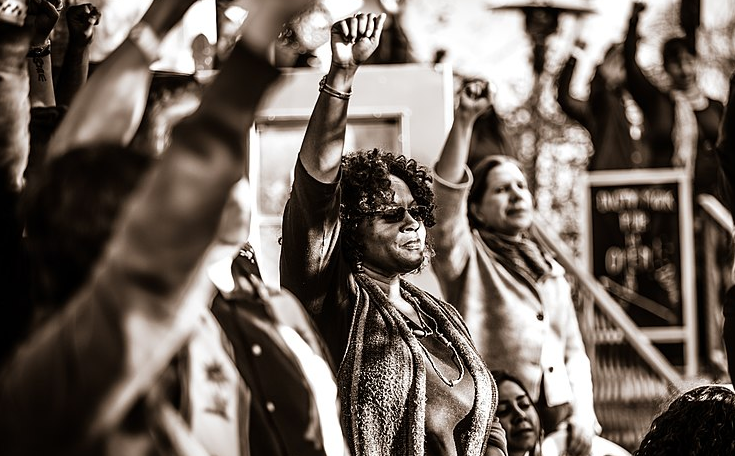 This first appeared in The Havok Journal on April 10, 2017 and is just as relevant today.

Greetings, Black Lives Matter. Please allow me to introduce myself.

I am a descendant of immigrants. My paternal great-grandparents made the passage from Sicily to Ellis Island in 1905, and subsequently settled in Birmingham, Alabama — not exactly a “fair and welcoming” city for swarthy Mediterraneans at the turn of the 20th century. Didn’t make my grandfather, Saverio, any less inclined to serve his country as a United States Marine. I’m admittedly proud of my family’s assimilation in our great, yet imperfect, country that was once assiduously wary of their immigrant arrival.

My maternal great-great-great-grandfather, a descendant of English migrants, served in the New York State Militia during our nation’s bloody Civil War. His great-grandson, my grandfather, Francis J. Petry, was a WWII and Korean Conflict veteran, and proudly led a company of Combat Engineer colored troops in 1951, just prior to President Truman’s executive order integrating the U.S. military. I’m exceedingly proud of his ability to see beyond color at a time when segregation was the law of the land in many locales.

As for me, I grew up in the Deep South during the 1970s. My formative years occurring during a historically transformative period in an America still struggling with the changes wrought by the Civil Rights Movement of the previous decade. I endured, firsthand, the sociological transition, experiencing the ’70s era in Atlanta, Georgia as a youngster, replete with forced busing, and white flight to the northern suburbs, and the fairly unique experience of coming of age as a Caucasian, in the Deep South, and as a minority.

During my youth, I witnessed Atlanta become a leader in embracing the ascension of African-Americans to positions of governmental prominence. As a child, I thought all big city mayors were black, like Maynard Jackson and Andrew Young. What did I know? My neighborhood transitioned rapidly during the ’70s, and by high school, we had no white neighbors. This wasn’t cause for any concern in my family, far as I can recall. It was my normal. I have fond memories of my friends, neighbors, and school chums from that time period. I was young and maybe imbued with a bit of adolescent naivete, but I didn’t experience race riots, or casual employment of denigrating racial taunts, and didn’t sense the deep and polarizing divisions we’re currently experiencing. Did those things exist? Sure. I have read about them. I’m acutely aware that hate exists in America. But it wasn’t MY experience in my neighborhood, my schools, or my city throughout my childhood.

I arrived at West Point in the early 1980s. My musical tastes were shaped by my childhood. I knew Earth, Wind & Fire, Peaches & Herb, and George Clinton. Along with an African-American classmate, we introduced the cadet radio station, WKDT, to the United States Military Academy’s first total R&B/Hip-hop radio show. My classmates in the 1987 cadet yearbook, The Howitzer, jokingly referring to me as “Gags, the man without a race.” We were fearful of the Soviets back then. For me and my Academy classmates, again, no sense of racialism.

I’m certainly no Pollyanna. Having an optimistic outlook on life or fond recollections of a period of time and certain experiences doesn’t equate to shared experiences with everyone else. And my perspective is shaped by my own experiences and conditions. I get that. I understand. I do. But I find it most deliciously ironic that the only times in my life that I have been branded a “racist” or a “bigot” is when friends I grew up with and West Point classmates that I served with taking issue with my political positions or criticisms of our first African-American president. It’s never about policy or differing ideologies then — it’s RACISM and BIGOTRY — even if we grew up together and you know my heart. And even if I coached your sons at the local Boys & Girls Club. America 2017 — diversity in everything, except thought. So intellectually lazy and dishonest…but, alas, I digress.

I guess it’s also important to note that I credit my wonderful parents for instilling in me the timeless Christian tradition of judging folks by their actions, and not by conditions beyond their control, like skin color. This credo became so indelibly stamped on my conscience as a youngster, made more relevant in that one of Atlanta’s most famous sons, Dr. Martin Luther King, Jr., had once so eloquently spoken of a dream that foresaw his children living in a nation that saw them judged not by the color of their skin, but by the content of their character.

That’s an important human law to adhere to. It’s what made the protection of the least of us so important to me.

And so, after completing my military obligation as a U.S. Army Officer in 1991, I embarked on a quarter-century career in the greatest law enforcement agency ever designed — the Federal Bureau of Investigation (FBI). It had always been a dream of mine to pursue a career in the service of others, and the thrills I experienced making a difference as a law enforcement professional hunting down and apprehending those that prey on innocent victims was a blessing I still feel undeserved of.