HomeNationAll Lives Matter is a Copout 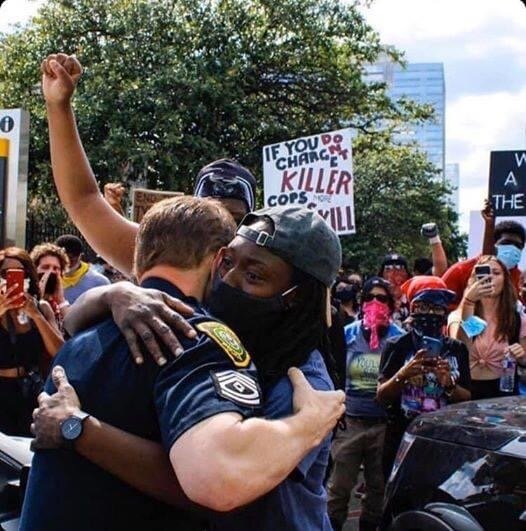 This first appeared in The Havok Journal on June 3, 2020.

I am not a racist. I grew up in the San Francisco Bay Area in the ’80s and ’90s. White people were the minority in my high school. Asians and Indians were the majority, and I was a member of the Asian Community Association. My Godchildren are Guatemalan Americans, my niece and brother-in-law are Afghan Americans, and I am an Ashkenazi Jew, married to an Alaskan Native. That makes our children members of two people groups who have been driven to the brink of annihilation in North America, Europe, and Asia. But you would never know any of that. Because from the outside, I’m just another white dude. My ethnicity is hidden, and so are my opinions. Unless I choose to share them.

I no longer care to be just another white dude, silently condoning overt bigotry and violence by quietly condemning it from the comfort of my privilege.

“Silence in the face of evil is itself evil: God will not hold us guiltless. Not to speak is to speak. Not to act is to act.” – Dietrich Bonhoeffer

Though my ethnicity is hidden, a Black Person’s is not. It is not the same. What Black people experience in America is not the same. I know that I am treated differently now. If you get nothing else out of this, hold on to that one and ask yourself if you can relate. Opinions matter in the public arena and by not speaking out against injustice, I allow my thoughts to remain as hidden as my ethnicity, making me complicit in societal racism.

Seven years ago when the Black Lives Matter movement started, I said, “yeah but all lives matter, right?” Right. So act like it, America. Black Lives Matter because they are the ones that are systemically, routinely, and persistently treated like they do not matter in America. We can say what we wish about honoring all lives, but our behaviors fail to align: systemically.

All lives matter is a copout.

When riot after riot broke out in response to the killing of a black man (or woman), year after year, I said, “what good is burning, destroying, and looting our country going to do, right?” Right. Only it’s not “our country” as equitably defined in our social contract for all. We have skewed the terms of a society that African American Ancestors, frankly, didn’t seem to ask to be a part of in the first place. And thank God that we have Black Americans, but God help us to change a structure that is unjustly skewed against them.

The Nation we live in today does not equally honor a black person as it does a white person. The cultural norms are not the same. Stop acting like they are. Today, after watching the George Floyd murder, the murder of Ahmaud Arbery, and the racism directed against Christian Cooper in Central Park, NY, I will stop pretending. Will you?

Our society patronizes murder after murder, explaining it all away.

Stop it. It is clearly a pattern. Stop acting like it isn’t.

The pattern is the unjust treatment of Black People. At the center is a persistent, systemic racial inequality exacerbated by a complete vacuum of authentic leadership from the very top. This is crushing us as a people.

Typically, I reflect upon the world drawing from my own experiences. But I simply have no relevant experience to compare here. And that’s the point: I don’t understand. I don’t understand what it feels like to be treated differently because of the color of my skin and I never will.

Many in the Law Enforcement community have condemned the murder of George Floyd as wrong; a complete departure of acceptable practices and procedures. Now back to the point.

Our Nation burns with the pain and anger of centuries of systemic racism. Shaking our heads in silence complicity enables this evil to persist. The injustice is sickening, the actions are no longer unseeable as anything other than racism, and the racism must be extinguished. So let us take action.

I won’t riot. I’ve experienced enough violence for a hundred lifetimes. Instead, I will love others (John 15) by speaking out against racism and advocating for change. By forging genuine relationships with Black Men and Women who I wish to better understand by knowing their stories, and by listening to their experiences. I will inform myself further in my graduate studies to be a part of the solution. And I will pray that the God of Creation, who created us all (black, white, and every other color and culture), will invade our hearts and burden us with compassion for our Black Brothers and Sisters who are being unjustly treated. And that He will convict us all to reject passivity and stand up for what is right.

It’s not perfect, but it’s a start. A beginning prompted by refusing to pretend like I have any relevant understanding of what it must feel like to be systematically oppressed. And a commitment to no longer be just another silent white dude, complicit in systemic racism.

As I said in the beginning of this piece: I am not a racist. I am anti-racism. And I have a voice and I plan to use it.

What will you do?

This article was first published on Applied Leadership Partners and republished with permission.

Brandon Young is a former U.S. Army Ranger and the Co-Founder of Applied Leadership Partners.