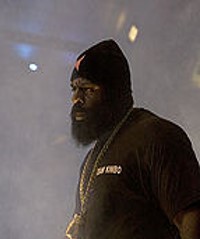 Keven Ferguson, better known as Kimbo Slice, a man who rose from street fighting fame to success in the Mixed Martial Arts circuit, is now dead.  He was 42.

Slice initially gained notoriety through internet videos of his prowess in bare-knuckle fighting in the streets and back yards of his adopted hometown of Miami, Florida.

His progression into the professional fighting world was not without controversy, as it was widely believed his street fighting skills would not transfer well into the MMA circuit.  He also got in trouble for failing drug tests related to performance-enhancing substances.

He eventually proved his doubters wrong, however, though his performance on The Ultimate Fighter reality TV show, and through his record in professional MMA, where he amassed more than twice as many wins as losses.  Perhaps his most famous fight was against UFC legend Ken Shamrock, a contest Slice won in the first round.

A fierce opponent on the streets and inside the ring, Slice was generally considered a kind and generous man in his daily life.  He was also the father of six children, at least one of whom has followed him into professional fighting.

Foul play is not suspected, and while a heart attack is the suspected cause, there is currently no official word on cause of death.