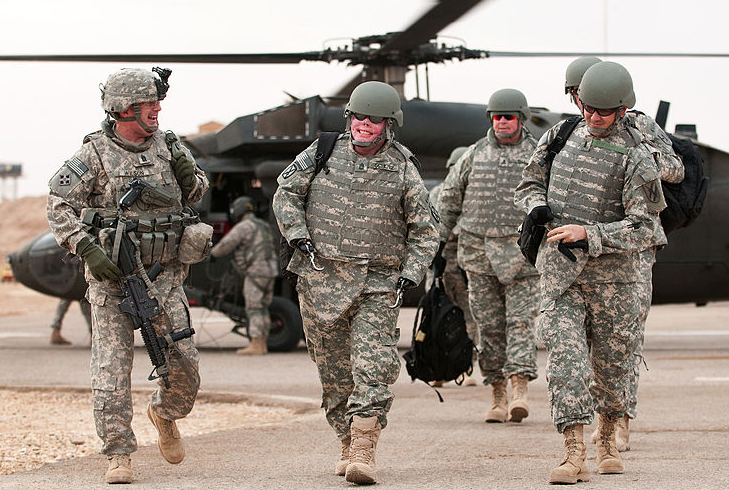 by an Anonymous Veteran

“We” – loosely speaking – are members of a “club” called U.S veterans. It’s a broad term with varying shades of gray. Anybody that signed on and then makes it through basic-training is a member, but the spectrum of participation is broad. Some members wash out a few months after graduation but take their membership to heart for the rest of their lives. Some members stay in for 20 years, and although the culture inevitably shapes them like water over stone, their service is just a costume.

Whichever way our story of military service plays out, part of that story is our acceptance of risk of unknown proportions. We agree to potentially lay down our lives to defend the greater good. That risk has a lot of different shapes and forms, it’s not a one-size-fits-all notion. Ask the dad that did 20 without injuries, never saw any blood, but his daughter won’t speak to him because he’s an overbearing jerk that missed all of her birthdays. Sacrifice has a very unique look, taste, and feel…but everybody gets their ice.

So it goes. If we are going to be who we say we are, we have to agree that the quality of our service is just as fair-minded as the god of war that snatches some and leaves others unscathed; we have to be fair and generous towards each other if we want to honor the notion of service that is the hallmark of being a U.S. veteran.

Who does the country we served say we are?

More importantly, are we going to listen, or are we going to reshape the message? In this generation, the military seems conveniently cast as the embodiment of patriotism, in the form of a sacrificial lamb. Perhaps the reasons are unknown, but it seems a convenient method of escaping more rigorous individual contemplation of the nature of…things. We could say that question is about patriotism, but in truth, it seems likely that our society is simply so fragmented and diverse that it’s really hard for anybody to harness their thoughts on any single subject for very long. That being said, big shiny images are easier, and pictures of flags and amputees seem to make us all feel good about ourselves and one another, as a global power.

Who do we want to be?

So the question becomes, are we ok with that? First of all, “being a veteran” spans several generations and conflicts. So do we all want to be conveniently lumped into a poster-sized image of PTSD suffering desert-cami wearing flag waving service-dog walking patriots? Or, maybe do we have something a little less shallow to say about ourselves? Do we want to actually recognize that we did what we did because of who we are and how we are made as individuals? And even though we didn’t know what we were doing when we did it, we wouldn’t undo it even if we did know. We did it because we wanted to, even though we didn’t really know what we were doing. When we figured out what we were doing, did we realize it made us better?

Getting trained by the military to act upon that vague impulse to join the military transformed each and every one of us in ways that non-veterans really can’t comprehend. They can’t comprehend the hopelessness and the power that dictates random outcomes, combined with the sad resignation that it has to go that way to preserve that faint glimmer of hope that for whatever reason, it’s the right thing to do, because it’s our country, and we believe the deal is good enough to defend, and if nobody defends it, “the deal” is probably not going to get any better.

Whether that somebody is a little girl in Iraq or a little boy in the U.S. that wants to become a policeman, it matters not. What matters to me as a veteran is that I accepted that risk based on certain understandings, and I will have my reasons, and my purpose, and just like my DD-214, nobody is going to take it away.

How do we want society to see our membership in that club?

As a proud, self-indignant veteran, there are numerous things about which I am adamant. I am adamant that I not be seen turning against the club and/or its members. I must frequently tailor my language and tone to achieve this. More importantly, however, I refuse to be portrayed as some broken robot that got spent like shell-casings after my best years were used up. I am not willing to let any veteran be depicted in that manner, it defiles the very notion of accountability and service that defines my country.

Even when we had a draft, we had the choice to serve or walk away. As long as the government does not knock on my door in the quiet of the night and steal me away to a prison camp, I’m going to defend the notion that in this country, we are not victims. Not ever. In this country, we protect victims. In this country, there is more than enough to go around, and as a veteran, we make sure that everybody gets at least one serving, even if we don’t get second helpings, and go a little hungry.

How do we want to deal with each other, as members of that club?

In any family, we have the right to abuse and harass each other in private, but it is expected that we ensure that nobody outside our tribe enjoys those same liberties. Nobody puts Baby in the corner except baby’s older brother.