HomeCultureMilitaryThe Button Box: A Tribute to My Brother—A Vietnam Vet

I was a young girl, maybe 14 or 15 years old, when my big brother’s draft number was “up” and he went off to the Army. I didn’t know exactly what that meant, but I could see that it was serious business based on the distraught look on my mother’s face. My dad drove him to the bus station in Los Angeles, and he was gone—just like that.

Six weeks later we went to Greg’s boot camp graduation at Fort Ord in Monterey, California. Even though he was just 19 years old, he was big, tall, and strong with a man’s frame. He and my oldest brother, David, worked on dairy farms growing up. They bucked hay for the cows in the mornings before school and cleaned out the milk house after school. They always seemed older and more mature to me than they probably were. Especially now, as he stood tall and brave in his crisp uniform with the shiny brass buttons, he seemed terribly grown-up. He was so handsome, and we were so proud.

My dad—who liked to say Greg could “shoot straight” before he could walk—taught my brothers to shoot. Greg was an ace marksman, as the Army soon discovered. They trained him to be a sniper and then shipped him to Vietnam. What was a sniper exactly? I wasn’t sure. I knew they had to be hidden and unseen. But in my 15-year-old, adolescent mind I wondered: Where’s Greg going to hide? Behind a tree? He’s 6’ 4” and 210 pounds. Do they even have trees in Vietnam? I didn’t know. I prayed daily for his safety and his swift return home to us.

Then… another telegram arrived. In the ’70s, there were no cell phones, no skype, no VOIP, whatever that is. (I had to ask my grandchildren what VOIP was, as they know everything!)

RECOVERING—STOP—or words to that effect.

I caught a glimpse of the wording as mom clutched the telegram to her chest. She fell to her knees. The two soldiers who delivered the telegram carried her to the couch in the front room. Then… the waiting—until one morning. I was alone in the house and the phone rang. It was Greg. He sounded so far away like he was on the moon. I could barely hear his voice. He said, “I’m ok. I’m coming home. Tell mom and dad.” Click. The line went dead. What a joyous and important message! I was bursting to tell mom and dad.

His duffel bag arrived before he did. His buddies packed and sent it home for him. It stunk so bad of jungle rot and fungus, my mom dragged it from the front porch to the garage. She couldn’t bear to open it, so she sent me out to sort through it. Thanks, Mom! I was to save anything valuable—pictures, letters, etc. And I was to get rid of the rest, donate to the Salvation Army.

The war was not popular in 1972. Many protesters wore old army jackets and then burned them in protest, along with the American flag. We as a country had never seen anything like this. As I looked at the soiled, rumpled, stinking uniform my brother wore so beautifully just a few short months before, I just knew I couldn’t let someone disrespect my brother’s jacket. I was stuck between obeying my mother’s orders and my heart, which was broken at the sight of this. 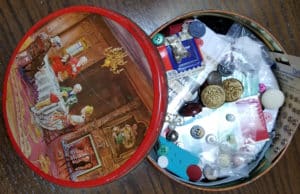 In my adolescent wisdom, I came up with the perfect solution—cut all the buttons off the jacket to render it useless to anyone else. I hid the buttons in my button box. In those days, everyone had a sewing kit and a button box. We repaired damaged clothes. We didn’t buy new ones.

Those shiny, heavy brass buttons now resided in my button box and stayed there unbeknownst to anyone save me, for nearly 50 years. Every time I opened my button box, there they were there to greet me—big, shiny, heavy, and impressive. Looking at them gave me a sense of comfort. I was proud of my brother and proud of his service to our country, even though his country didn’t seem to share in that same pride. The buttons were my silent, secret memorial to my brother. Over the years the buttons just became a living part of my button box. Sometimes I took them out, held them, felt the weight of them, then placed them back in their place.

Five decades later, I realized those buttons needed to be returned to Greg, the rightful owner. I packed up the now-tarnished, brass buttons and took them to the hospital where my brother courageously fought another battle with a dire diagnosis. I told Greg the story of the duffle bag, the stinking uniforms, and why and how the Army dress jacket was donated to the Salvation Army—sans any and all buttons! I confessed my wicked deed. Not exactly following mom’s directions, but not disobeying either. He got it—and he laughed! I saw that twinkle in his eye—the one he got when he knew a good joke was just pulled. I told him I loved him, I was proud of him and repeated how proud I was of his service to his country. We laughed and hugged again. I felt relief like I was granted absolution.

Even as my heart was a little bit heavier, my button box was now a little bit lighter without my brother’s heavy brass buttons. The box, although full of all sorts of buttons now, we’re missing the most important ones. The buttons that occupied a secret hiding place in my button box and in my heart were gone now. Back to their rightful owner—50 years later. I can still see the buttons there, in their place, waiting for the right time to be returned.

I can also still see Greg too, even though he has also been returned to his “rightful owner,” his Heavenly Father, who welcomed him home with open and loving arms on December 14, 2018. And I bet, at some point, he’ll tell mom the button box story, with a smile and a twinkle in his eyes, sharing how we got one over on mom—again!