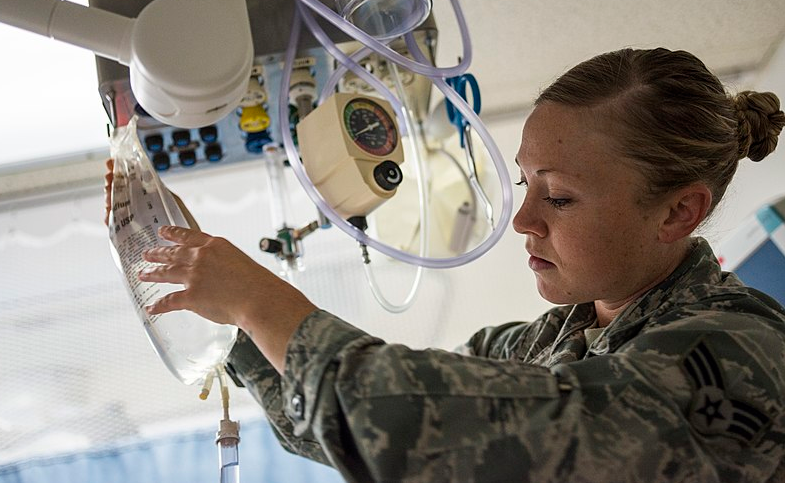 Sometimes heroes show up when you least expect them, and this is about one of those times.

Most of my active duty Air Force time was spent teaching aircraft Crew Chiefs at Sheppard AFB in the early 1980s and on this particular summer day I had my class out on the flight line working on one of the training aircraft. While we were out there a transient C-130 cranked up and taxied out, turning away from us in the process. Now 130 prop blast doesn’t extend very far back when they are taxiing but I still have a habit of turning my back to any jet blast and I did so in this instance.

The aircraft departed but shortly thereafter my left eye started watering. It felt like I had an eyelash or a bit of dirt in it. I tried to ignore it figuring that the watering of my eye would eventually wash it out. But it kept annoying me, so I climbed up into the cockpit of the F-4 to use one of the mirrors to take a look. As a side note, many older fighters had mirrors mounted around the canopy so that the pilot can see behind him. Anyway – I looked into the mirror and saw that I had a metal sliver about the size of an eyelash sticking straight out of my eye.

Strangely enough, it didn’t hurt that much but it wasn’t fun to look at. I passed my class off to my backup instructor and went to my boss’s office to tell him that I was going up to the hospital. He asked why but when I showed him my eye he just shuddered and asked if I needed a ride. I declined and told him I’d be fine since it was just up the road.

Now at this time, it was pre-Tricare era and Sheppard had a huge regional hospital where they even did major surgeries. I sauntered into the ER and when the receptionist asked what was wrong, I just leaned in and pointed to my eye. She shuddered too and got me right back to an exam room.

In fairly short order a Tech Sergeant and a Staff Sergeant medic came into the room, evaluated what was going on, and told me that the Doc would be in shortly. We were making small talk when the Doc showed up. He was a Korean doctor, and it was obvious he spoke English as a second language. He looked at my eye and then turned to the medics and said, “We do surgery on eye. You call and get OR scheduled. We do surgery to remove splinter!” Then he swept out of the room.

What worried me the most was the expression on the medics’ faces. They looked, well, frightened. Let’s just say that I don’t like it when medical people treating me look frightened or say “uh-oh” or “that’s not good!”. I asked them what was up and they just said, “Come with us and be very quiet!” Since I trust medics more than doctors I complied.

We went down a series of halls into another part of the hospital and into another treatment room where they laid me down on an exam table. I asked them what was going on and the Tech Sergeant said, “Listen, that doc is incompetent and if we let him around your eye, you may very well lose it. I’ve dealt with lots of foreign objects in eyes. I can get it out really easy and get you out of here before he finds us. You want me to take care of it?”

The decision came out of my mouth just as quickly as when the splinter flew into my eye, and they ran some saline and he rolled it out with a Q-Tip. Just like that and it was gone. No surgery or blindness. He gave me some drops, patched it, gave me post-treatment instructions as they shoved me out the back door, and basically told me to run and not look back.

I have no clue as to how they handled my records or the Korean Barbecue doctor, but I never got a call from the hospital asking where I went. A few years later I was looking at my record (they were paper in a big file folder) and I found the visit and the treatment. It was signed off by the doctor with a stamp. I’m pretty sure there was some forgery going on.

For those of you in the medical field who are aghast at the illegal actions that went on here, let me ask you this. Would you have let the doctor blind me? And BTW – there were all sorts of malpractice events that happened at that hospital.

Anyway, I’m forever grateful to those two medics. You guys are my heroes and you taught me a valuable lesson about leadership. Sometimes you gotta’ break the rules to take care of your people.