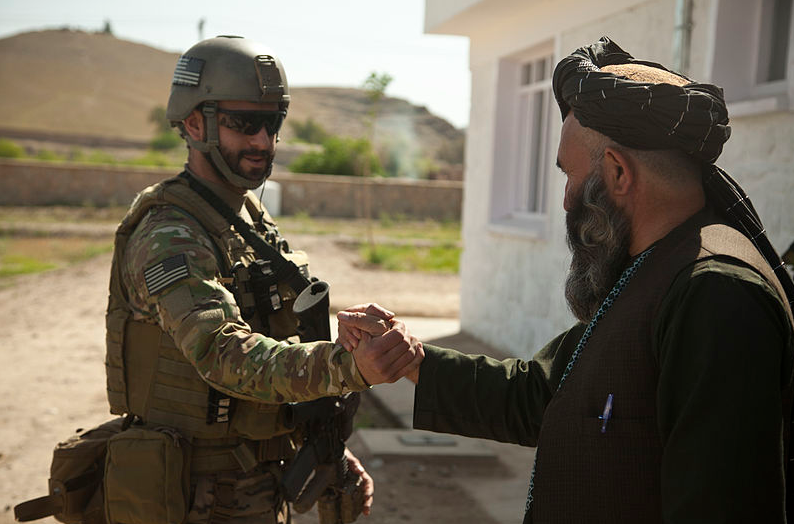 This first appeared in The Havok Journal on August 19, 2021. A year after the U.S. withdrawal from Afghanistan evokes strong feelings from many veterans.

If you have ever gotten in a deep conversation with a Vietnam Veteran, one of the middle-ranking officers instead of soldiers, you got an interesting take on the reasons why that war was ‘lost.’ In their telling, they were able to consistently beat the Viet Cong when they could find and engage but they never could get a decisive victory because North Vietnam and Cambodia were places of refuge and active support. In their estimation, the real decisive fight was there and as long as those areas remained uncontrolled then all they were doing was ‘mowing the grass.’ I have often thought about those conversations as I lived through the Afghanistan problem.

Before I talk about just how unhelpful Pakistan was, it is important to consider the matter from the Pakistani perspective. If you are a Pakistani decision-maker, you’re in charge of a country with four mutually antagonistic ethnic groups: The dominant Punjabi, the urbanized Sindhi, tribal Pashtun, and the nominally nomadic Baluch. Furthermore, you have four dire strategic considerations. The first is that your historic enemy the Indians are richer and more powerful and have kicked your ass in every war you’ve fought. The second is that you are facing a horrific demographic and climate change bomb that is overwhelming your capacity for governance, and the third challenge is that the area richest with natural resources is the home of the Baluchs who you have mistreated and hate you.

The fourth challenge though has to do with the second largest ethnic group, the Pashtuns. Northern Pakistan and the FATA especially are home to Pakistan’s restive Pashtuns. During the Soviet War in Afghanistan, this is where the Saudi-funded Madrassas were established which radicalized and militarized an entire generation of Pashtuns. They have cross-border kinship ties with the Afghan Pashtuns and traditionally the Pakistan Pashto have been deeply antagonistic to the Pakistan state. These Pashto along with poor rural Punjabi in adjacent areas have been one of the main sources of instability for Pakistan in recent years.

So if you are a Pakistani decision-maker, your strategy has been to look for the right moment to confront India as well as make nice with India’s enemy China, coopt the relatively affluent Sindhi, stomp on the necks of the Baluch whenever they start interfering with economic expansion and resource extraction in Baluchistan and find a way to neutralize or redirect the militancy of the Pashtun. On that last point, Pakistan and its intelligence agency, the ISI, managed to do that effectively during the Soviet years and after their withdrawal with the rise of the Taliban. It also had the bonus of allowing Pakistan some measure of control over their neighbor Afghanistan who historically seemed to look to rivals Iran, Russia, for support. But when the United States invaded and all those Taliban with relations in Pakistan retreated across the border, they brought their restiveness with them. It was no accident that the 2000-2010 timeframe saw an exponential increase in radicalism and violence in Pakistan proper.

Pakistan became the sanctuary for the Taliban, Al Qaeda remnants, and other extremists fighting in Afghanistan. It would be a bit much to say that Pakistan was actively supporting them though it would exactly be inaccurate to say that either. The fight in Afghanistan enjoyed popular support with the Pakistan Pashto specifically and not an insignificant amount of support from other Pakistani citizens. It wasn’t uncommon in Pakistan stores throughout the country to find donation boxes for organizations that clearly were fronts for the Afghan or Kashmir fight – there were some interesting cross relationships between the two causes which I won’t go into here. And Pakistan’s military and intelligence likely had relationships with the Taliban and knew exactly what they were up to.

But the sanctuary was the most important. There was an entire infrastructure of logistics, hospitals, boarding houses, Madrassas serving as recruiting depots, and financial backing which served to sustain the Taliban throughout the dark days of 2003-2005 and served as a platform for them to retake Afghanistan. The predominance of the Afghanistan Taliban was still locally drawn fighters and resided in their home regions, but leadership and specialist cadre would transit back and forth. Particularly in an Afghan border Province if things got too hot you could always go hang out in Pakistan for a few weeks or a season till things calmed down.

Pakistan had full knowledge of this activity. Very early on in the aftermath of 9/11, Pakistan was a bit more cooperative and when the violence started to ramp up in their own country, they did conduct military action in the FATA to try to tamp it down, and here is the thing – they generally got their asses handed to them and subsequently saw violence deep in Punjab ramp up. Pakistan decision makers early on knew that cracking down on the Pashto was going to be a losing proposition for them. Plus, I think the Pakistani leaders recognized something about Americans. They saw us support and utilize that Madrassa network and Pashto militancy for our own ends in the 1980s to fight the Soviets and then left all of it in place for the Pakistanis to deal with in the 1990s. They knew we would do it again so Pakistani calculus ultimately was never predicated on the short-term – it was pegged to how were they going to interact and live with this restive time bomb in their midst. In the end, they decided to diffuse it by letting it explode into Afghanistan.

We were aware of this state of affairs from pretty much the beginning to the point where we even referred to the ‘Fighting Season’ and learned about when the Madrassas were letting their students out on break because attacks would spike during those times. But the United States could never fight with the right basket of sticks and carrots to entice Pakistan off this stance and frankly, I’m not sure we could. If it weren’t for Iraq, we might have had sufficient forces and enablers to attempt a border interdiction strategy. If we had the strategic resolve to stay for a century, you could threaten the Pakistanis with, ‘Deal with the situation or we will come across the border and deal with it for you’ and that threat would have had teeth. But in the end, we just tolerated the fact that Pakistan was going to be the Taliban’s sanctuary and prayed that Afghanistan could be built up strong enough to cancel that out. Next, I will talk about why that was a doomed proposition.

Christ retired in 2019 after twenty-three years in the Army. He served as an intelligence officer with postings overseas in both conventional and special operations units. He now works in prison administration and continues to serve as a volunteer firefighter.