HomeCultureMilitaryWounded By War: The PDSS Flight 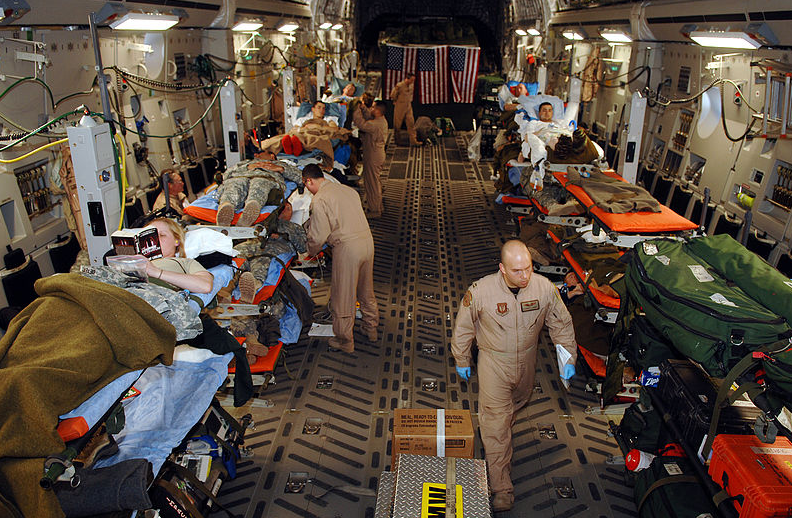 Returning from the pre-deployment site survey (PDSS) was a bit of a cluster. On the deployment forward we had flown through Manas Air Base, Kyrgyzstan. The site survey teams split off to their various outposts before coming back to Bagram Air Base near Kabul. From there, it was up to us to find our own way home.

My 18E (communications sergeant) and I linked up with another ODA PDSS team to start the trek back. Customs went fine but we hit a snag at the airport. “No flights available,” she said. “Jay” and I reasoned with the lady at the check-in desk, asking for more options. Option 1: we could take a flight to Kuwait and sit there for two weeks until a rotator got us back home. Nope, not going to work. That would put zero lead time between us and pre-mission training (PMT). “Anything else?” we asked. “Do you agree to go space-A on a MED flight direct to Germany and then Germany to the U.S.?” Option 2 it was.

The four of us were relieved we were getting home without delay. We were looking forward to seeing our family and friends, briefing our teams on our findings, and then heading out to PMT. We were jovial, laughing even on the tarmac waiting for the bird. I was ready to get home.

Our good mood ended as soon as we got on the C-17.

Young soldiers on stretchers, many of them unconscious, lay before us. Most of them didn’t look older than 21. One was missing a leg. Above him was a young man missing both legs, unconscious, hooked up to a breathing device. Another had lost an arm. Another was suffering from multiple gunshot wounds.

There was a medical team abroad that worked feverishly the entire flight, checking on their patients. There weren’t any screams of agony or cries of pain. Just the silence of professionals who went about tending their precious cargo. A Chaplain stood up mid-way through and made his rounds to each man, praying with them, even though most of them couldn’t respond. The ones who could gripped his hands tightly. Tears flowed freely between the two men.

The four of us sat silent the entire 6-hour flight. We didn’t sleep either, even though it was the middle of the night. I will never forget how I felt. It was the first time I felt hatred in my heart. I was ready to kill, now more than ever. I let that hatred burn.

The C-17 touched down in Germany. We sat still, waiting for the patients to be removed from the aircraft. When the last stretcher came off, we grabbed our bags and walked down the ramp in a stunned state. It was morning, overcast with grey clouds, and just hours earlier we’d been in Afghanistan. A few hours more and we’d be home to our families. And those young men on stretchers had long roads ahead. A twinge of survivor’s guilt flowed through me and then I reminded myself we were going to be able to do something about it real soon. Good. Whoever hurt those young men deserved to die. I let the hatred in my heart stay.

That was May 2012. Five years later, C-17s filled with stretchers are still bringing our men and woman, torn asunder by bullet and blast, to military hospitals in Europe and the U.S. I don’t know what happened to those young men that night. All I know is that the 21-year-old wounded private on the stretcher in 2017 was 16 back in 2012…16.

I hope we win this war – for the soldiers on that flight, the thousands before, and the unfortunate thousands that may inevitably follow.