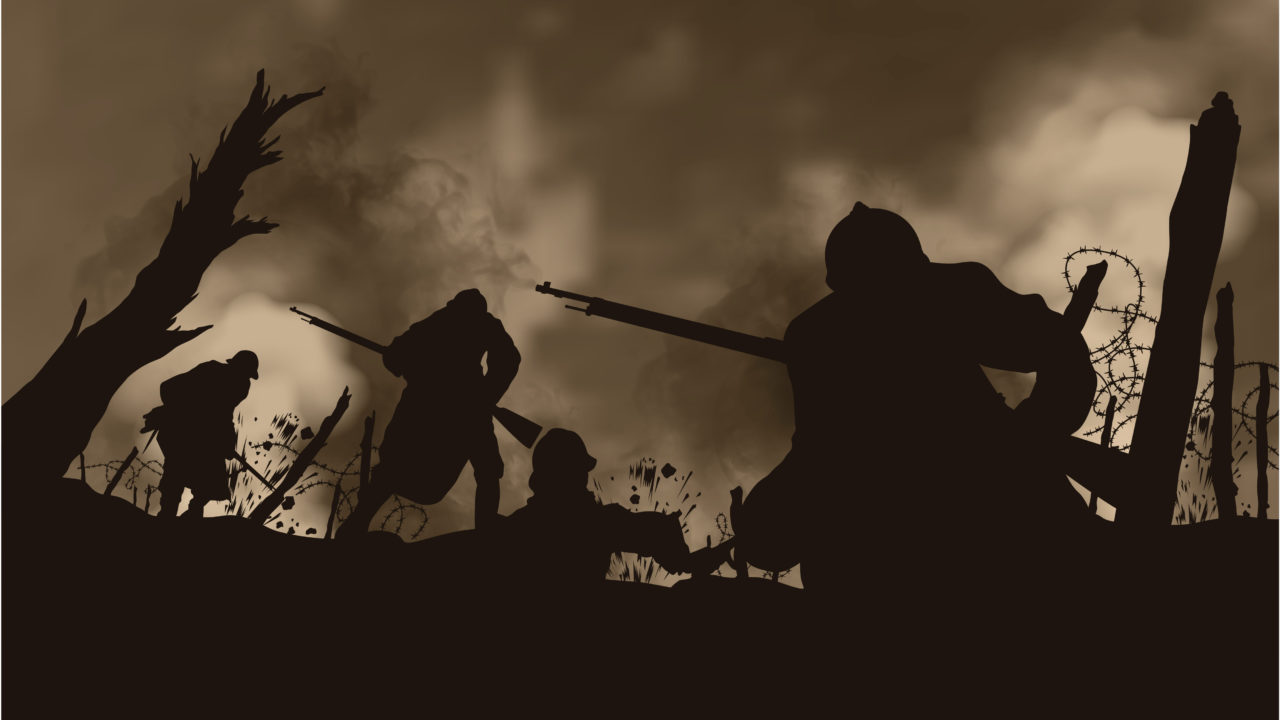 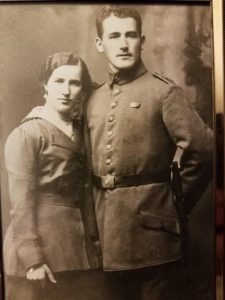 Here dead we lie, by A. E. Housman

Here dead we lie
Because we did not choose
To live and shame the land
From which we sprung.

The motivational speaker Tony Robbins once said “It is in your moments of decision… that your destiny is shaped.” This profound statement captures the very essence of my Grandfather’s story.  It begins with a decision made in the trenches of the Western Front…

This a story of a young German soldier, Karl…my paternal Grandfather, whose entire life was shaped by the larger events of his time, happenings beyond his control that molded his life forever. It is a story forged in battle, of personal courage, or some may say, of cowardice… but it is a story of a fateful decision, made by a young soldier that had lasting consequences.

My Grandfather’s adult life story begins with the First World War. When World War I broke out in August 1914, my Grandfather was just 16 years old and too young for military service. His older brother, Franz, however enthusiastically enlisted in the Army when the call went out for volunteers. Caught up in the nationalistic fervor of the time, Franz joined up to fight a war that was to be, by all accounts concluded by Christmas. He marched off to war with the 15th Bavarian Infantry Regiment with visions of glory and heroic victories. But the illusion of victory evaporated quickly and the stalemate of the trench warfare set in soon thereafter. Franz found himself struggling daily just to stay alive. In 1915 he was severely wounded from a poison gas attack and almost died. Due to the severity of his injuries, he was immediately discharged from the Army. He came home a broken man, his lungs horribly scarred from chlorine gas. For the rest of his life, he was an invalid and became addicted to morphine. The war was over for him, but it was just about to begin for his younger brother Karl. 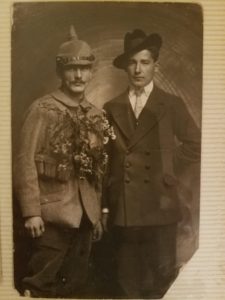 My Grandfather (on the right) and his brother Franz circa 1914.
It was a common tradition for young girls to pin flowers to a soldier’s uniform when they went off to war. (Family Archive photograph.)

By the end of 1915, stalemate settled into trench warfare, it became a war of attrition where bleeding the enemy white became the objective.  In October 1915, my grandfather turned 18 and was immediately drafted into the German Army.  His profession prior to his conscription was listed as a “gardener,” although I surmise that was a generic description of employment given to young men who went immediately into the Army after graduation from secondary school.  After his initial training, he was sent to the same regiment that his brother Franz had served with, the 15th Bavarian Infantry Regiment.

My Grandfather was just a young man when he saw heavy fighting in the trenches on the Western Front in Belgium and France. He was wounded several times and in 1917 was seriously injured in the head and legs from artillery shrapnel. He spent weeks in different field hospitals recovering from injuries and disease, including typhus which was spread through the rats and lice that cohabited in the trenches with the soldiers. In spite of injury and battlefield disease, he was only awarded the Verwundetenabzeichen or Wound Badge (the German equivalent of the U.S. Purple Heart) after he had received a gunshot in the hand. Interestingly, a gunshot wound to the hand, especially if it was to the left hand, was often viewed with suspicion, intensely scrutinized by medical officers, searching for signs that it might be self-inflicted. Apparently, Karl received this “million-dollar” wound or Heimatschuss, or “home-shot” as the Germans called it from the enemy, and not from his own rifle. 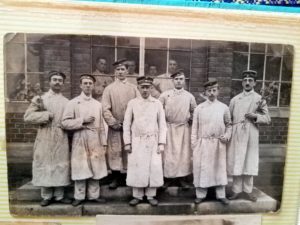 At a field hospital somewhere behind the Western Front.
My Grandfather is the third from the left (Family Archive photograph.)

His service records indicate he participated in many of the major actions of the war. In 1916 – 1917 he participated in trench warfare near the French towns of Spada and St. Mihiel. In 1917 – 1918 he fought in the major campaigns in France, including trench warfare in the defensive battle at Verdun. The battle of Verdun was a horrific bloodletting, the battle lasted for 303 days, the longest and one of the most costly in human history. It was calculated that the French suffered 377,231 casualties and the Germans 337,000 with an average of 70,000 dead or wounded per month. 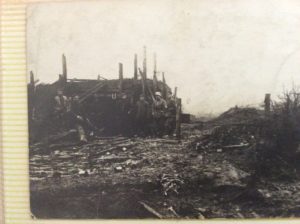 Fortifications on the Western Front circa 1918. (Family Archive photograph.)

One miserable day on the Western Front, my Grandfather’s infantry unit was preparing to go “over the top” of the trenches and assault the Allied lines. At just 19 years old, Karl had the carnage and devastation of the war seared into his mind. As they made their preparations to attack, my Grandfather knew the Allied machine guns were trained on their positions, ready to sweep the top of the trench line with blistering machine gunfire. The machine guns would rake one end of the trench and traverse systematically across to the other end of their effective field of fire. To go over the top without some sort of covering fire from artillery meant certain death.

Without any covering fire, the platoon commander blew his whistle and gave the order for the unit to assault into No Man’s land. As the soldiers clamored up the trench to the top, my Grandfather made a split-second decision, he paused…and intentionally “slipped” back, sliding back down from the top, just as the rest of his unit went over the lip of the trench. The soldiers that crested the top of the trench were immediately cut down by machine-gun fire as the dead and wounded slid back into the trench.

As the machine guns traversed the other end of the trench line, mowing down the advancing wave, my Grandfather climbed up and jumped over the trench into a shell crater on the other side. He then proceeded with the surviving members of the unit from the next wave into the attack. In that moment of terror, Karl had made a fateful decision.

In war, there is a very fine line between being courageous and being foolish.

Did my Grandfather act out of cowardice or out of common sense? Is the duty of a soldier to execute his orders, even in the face of certain death? Was his duty to live to fight another day, or follow his brothers-in-arms into the jaws of destruction? These are questions that only an individual who has fought and survived can answer, questions that I am sure my Grandfather wrestled with throughout the remainder of his life.

When that terrible war finally ended on the 11th of November 1918, a defeated and demoralized German Army had retreated into Belgium and that is where my Grandfather ended the war. Over the next several weeks, the German Army demobilized and the soldiers returned home. At war’s end, my Grandfather had just turned 21 years old. His entire adult life to that point had been spent in combat. Remarkably, he had survived the horrors of trench warfare and received several military awards and decorations including the Iron Cross Second Class…for bravery. 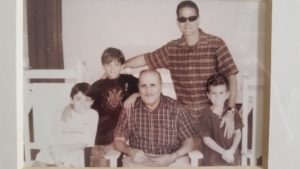 Three generations owe their existence to one fateful decision, made during World War I by my Grandfather (Family photograph.)

My Grandfather would later go on to serve in the German Police force after World War I in Munich, Germany. He would survive yet another World War, finally retiring in 1970 as a Police Commissioner. His family ultimately ended up in the United States… but that’s a story for another day.

This first appeared in The Havok Journal on April 1, 2020.