HomeCultureGlobal Jihad Was Ground Zero For Orlando: What Are You Going To Do About It?

In the wake of last night’s shooting in Orlando, an incident that left at least 50 dead and scores wounded, objective and clear-minded Americans must see through the rhetoric and red herrings to identify the source of the atrocities that took place in a gay nightclub in Orlando: a global jihad ideology intent on destroying our way of life. 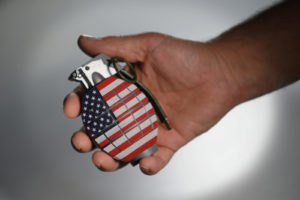 Already reports have come out announcing that at least 3 days ago, ISIL affiliates openly identified Florida as a location where a massacre would take place.  The shooter is also alleged to have sworn allegiance to ISIL and was shouting “Allah akhbar!” when the SWAT team finally breached the building and killed him, ending the standoff and hostage situation in the early morning hours of 12 June.

We are on the verge of politically correcting ourselves into extinction and allowing our society to devolve into a status of persistent conflict because of our unwillingness to recognize the true enemy now at our doorstep. It’s not law-abiding citizens with guns, it’s not a matter of preventing mass shootings; it’s a matter of national security and keeping our country safe from an ideology hell-bent on destroying America and its way of life.

The global jihadi seeks to usurp the current world order and replace it with a distorted version of governance they derive from a Salafist view of the Quran, Hadith, and Sharia law. They will not stop until they have either accomplished their mission or die trying.  Unfortunately, a blend of both occurred in the middle of the night.  America awoke to the worst terrorist attack on US soil since 9/11. It’s time to jettison the political correctness plaguing our country and declare war on global jihadism.

Calling it a “global war on terror” doesn’t go far enough. It should be a “global war on jihadism,” a war the entire world can rally around. It is one that puts those causing indiscriminate terror in the name of their cause on notice, and alerts our allies, including Muslim countries, that we are not at war with Islam. It’s an assurance many Muslims need to hear, and many can rally behind based on the predominant belief that the global jihad ideology does not reflect the beliefs of the mainstream Muslim, but does let those who sympathize with the cause that it is time to choose a side.

The questions that must be asked now include:

-How and why was he radicalized?

-Who inspired the attack?

-What was the tipping point that put Omar Mateen over the edge?

-How was he trained? Who trained him and where?

Reverting to the traditional questions of “where did he get his gun?” will get us nowhere in the face of an enemy that will use every tool at their disposal to kill.

The pundits and talking points will tell you it’s about mass shootings and access to guns, specifically “assault weapons.”  Don’t buy it. It’s much more than that.  It’s a matter of the heart, the mind, and the beliefs of the human beings that use those inanimate objects as tools of terror. No amount of gun control, universal background checks or counseling will stop people from grabbing any object they can and using it for terror. We have seen this take place in Israel, predominantly since last fall with the stabbings taking place, perpetrated by Palestinians. No one is standing in front of a podium now and calling for a ban on suicide vests or knives, so why take the bait on the gun matter?

It’s time for America to wake up and realize that we are at WAR. It’s time to declare it, call it by its name, and put aside our differences to defeat an enemy that doesn’t care what political party you subscribe to, what sexual orientation you have, or whether or not you believe in gun control. That undeniable fact about their ideology must be recognized, or we will continue on this path of self-destruction, finger-pointing, and divisiveness that leaves us in a persistent state of destruction at the hands of those we so quickly rush to apologize for.

It’s time to bring to bear the full fury of the U.S. military and destroy those who wish to destroy us, and not erode our own constitutional rights in the process. The gauntlet they’ve thrown down is simple: it’s either them or us.  They’ve made their choice, it’s your move . . . .