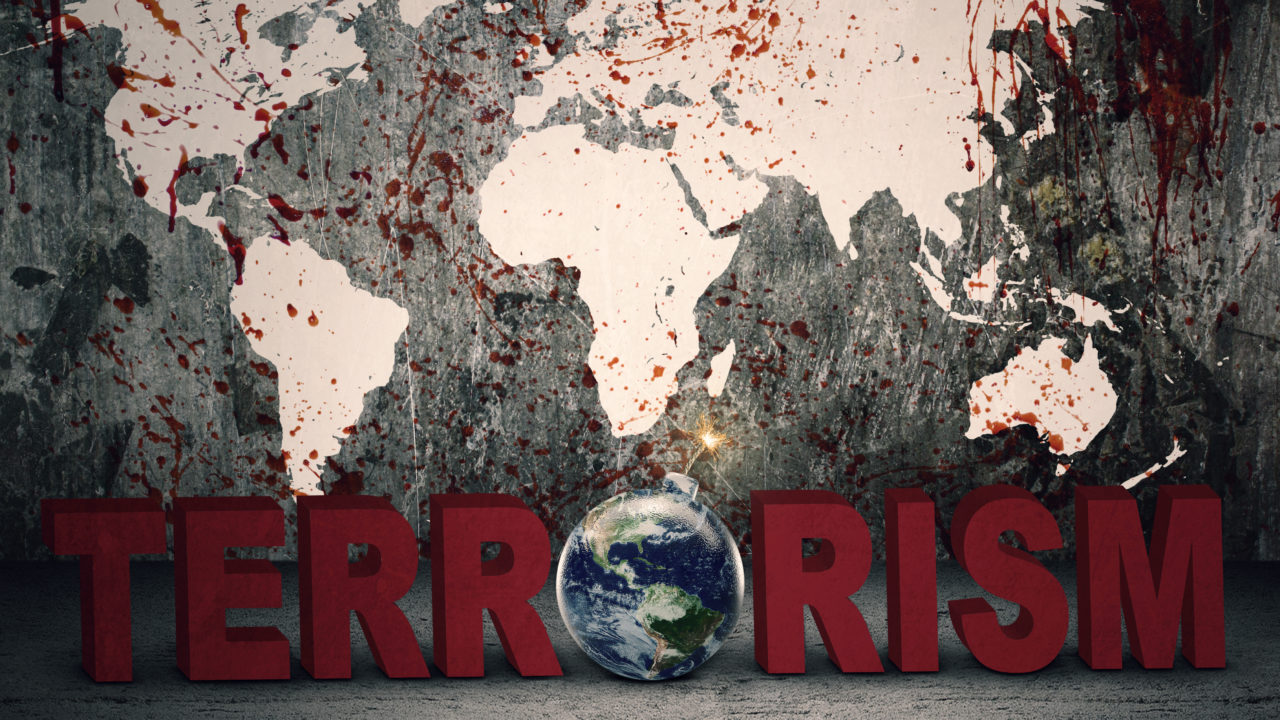 Ground on which we can only be saved from destruction by fighting without delay, is desperate ground.  “to be on ‘desperate ground’ is like sitting in a leaking boat or crouching in a burning house.”( Sun Tzu, The Art of War)

For, as Chia Lin remarks: “if you fight with all your might, there is a chance of life; whereas death is certain if you cling to your corner.”

The terrain of the battlefield is not always the dirt beneath your feet; often it is the thoughts that wage war in your mind.  We are at war and the terrain is showing itself to be increasingly desperate.

A few days ago we saw a graphic depiction of terror at work.  An American captive, deliberately and brutally murdered using a method guaranteed to inspire not only shock and fear but also fascinate and heighten morbid curiosity.  It was a demonstration of power and absolute domination.

There are easier ways to kill someone but if you want to send a message then beheading gets you millions of views of attention.  The method was chosen for its deliberate time-consuming carnage.  The visceral image is seared to the mind and you feel the chill that runs down your spine as you feel the death of another human being.

This is not the first time.  Ask the Russians about the tactics of the Chechens.  And ask yourself how many of the millions of viewers who saw that video decided to join the ISIS because of their demonstrated power?

The tactic is to make you feel your own mortality and to make you wish to strike out in rage.  Terrorists are will-o-wisps.  They wear whatever clothing they need when they wish to walk among you and only show their true colors when the time is right.  It was a display of raw power and will pull recruits to their side. A few bombs dropped actually strengthen them instead of weakening them.  They can afford to lose a few to the bombs.  The value gained is worth far more; just look at another Islamic terrorist group inviting attacks against itself:  Hamas.  They tell new recruits how they are feared by the mighty.  They show that the warplanes cannot really find them or even harm them.

And it is true.  You cannot destroy terrorist from the air unless you use weapons that are themselves the weapons of terror.  Smart bombs and precision guidance are not the answer.  Terrorist can only be defeated using one time honored and tested method.

You must engaged them on the ground and kill them in close combat.  You defeat terrorist by bringing them to grips and smashing them.  Terrorist are not warriors.  They are not even good assassins.  They are fanatics who will use any weapon to serve their cause.

You cannot stop a fanatic with reason.  You cannot stop them by appealing to their better nature.  They have given reason to their cause and their nature has been corrupted.  They must be destroyed if any hope of peace is to be attained.

History has shown us what has to be done.  Terror is not a new weapon.  Terror is a very old one.  Terror is the weapon of the weak against the strong because it strikes not with honor but with stealth and guile.

Robin Hood of myth and legend was a terrorist.  You need to understand that statement.  The West knows the story of Robin Hood and he is a hero.  But he was not a hero to the Sheriff of Nottingham.

Every terrorist is a hero to someone and that is where they get their support, their money, their intelligence.  The demonstration of power in the death of James Foley was as much a recruitment tool as a jab in the eye of the West.

I am willing to bet you may never have met all the ‘friends’ you have on Facebook.  You could have someone in your social network who is gauging your reaction to the death of James Foley and they are reporting back on how effective the technique was.

In order to destroy terrorists, you must defeat them unequivocally.  You must meet them face to face and kill them on their own ground.  That is the only way.  A thousand smart bombs are not as worthwhile as a hundred rounds in the rifle of an operator who is bent on destruction and has death for his enemies in his heart.  And that is what it is going to take.

Understand something, ISIS wins every single day that we sit back and do nothing.  They have been demonstrating their power from the beginning, executing Christians and others, forcing conversions, beheading children, and all America has done was a few desultory airstrikes that might as well have been dropped in the ocean for all the good they have done against them.

Iraq cannot stand against them.  The Kurds are trying but need far more help than they are receiving.  ISIS is well funded and gaining ground.  I don’t think Americans understand what they mean when they say they are establishing the Caliphate.

There is a belief that all Muslims will be united under one ruler.  That will be the coming of the Caliphate and the successor leader of the faithful.  This is what the Islamic State is claiming, that they will be the successors to Muhammad.

Others such have Boko Haram have claimed a caliphate and that perhaps confuses people.  A caliphate is a Muslim state.  The Caliph is the successor to Muhammad and his Caliphate rules all Muslims everywhere over one billion and counting.

This is what they are building towards.  This is something worthy of fear for it brings a new level of extremism to the table.  Osama Bin Laden just wanted to bring the West down.  His attacks were about reprisal and retribution. ISIS has a stated intention of ruling all Muslims in the world and so far they seem to be getting their way and their power is growing.

We need troops on the ground and we need more than the few hundred SOF that are there now.  We need Heavy and Light Infantry Brigades with SOF to fix and destroy high value targets while the regular forces smash their way through any ISIS formations and organized resistance.

To hell with the government of Iraq, this is bigger than they are and their incompetence works for ISIS and against us.  The only way to defeat terrorist organizations is to hit them on the field of battle where they cannot lie about victory.

We must crush them without restraint and without remorse.

Because rest assured, they showed no restraint for anyone so far and they will continue to show no remorse.  In order to defeat your enemy, you don’t have to become them, but you have to fight them on their ground and if you don’t understand them, you will lose.

This is war.  It is without end in the human condition.  It is time to put away civilized notions of discourse and negotiation.  It is time to fight and to bring all we have to bear on our enemies; the longer they survive, the stronger they grow and the harder this is going to be in the future.

A Chinese General, Sun Tzu, probably the most read military tactician of all time, described the different terrain of battle.  But not all terrain is dirt under your feet.  Some terrain is of the mind and in my mind; we have arrive at desperate ground.  We must recognize our predicament before it is too late.