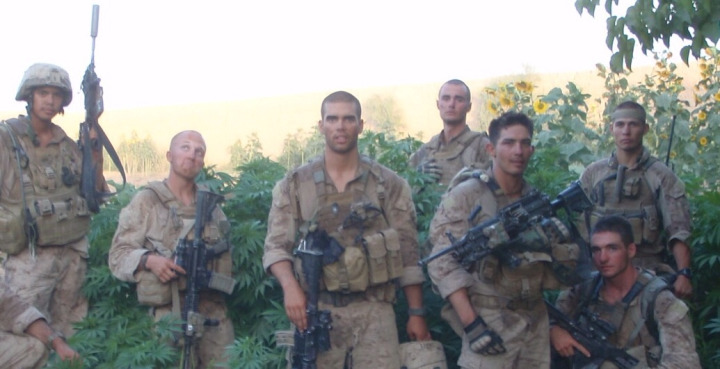 A year later, I was in Baghdad, Iraq as a Private Military Contractor.

There were two realities of that job;

2. I spent much of my free time alone in my room.

The guilt of watching him die every single day never left me. Almost daily, it seemed I would find myself in tears, on my knees on the floor, begging God for forgiveness for my failures as a leader, a Marine, and as a man. More than once, the desire to end it all became so strong that I would have to unload my pistol and leave it in my room. I couldn’t face my former teammates, and just getting and sending emails to them was an excruciating experience. The only thing that kept me from killing myself was the thought of the pretty woman and four children I had waiting for me at home.

I can never earn his sacrifice, but I can honor his life and death with mine. I can tell his story. I can tell my kids about the greatest warrior I’ve ever met. I can live my life, not as a feeble attempt to
repay him, but as a reflection of the love I have for him.

In the movie “Saving Private Ryan,” there is a scene where a dying Tom Hanks is speaking to Matt Damon’s character. Private James Francis Ryan just witnessed a group of men come to save him specifically, and then die in the process.

After the battle, Ryan hears Tom Hanks’ character, Caption John H. Miller’s last words, “James…earn this. Earn it.” We see years later, an aged James Francis Ryan standing at the grave of Captian Miller. He collapses in tears, asking his wife if he’s been a good man. He’s apparently spent his entire life trying to be worthy of the sacrifice made for him, and in old age, he knows he couldn’t.

Cpl. Claudio Patino IV wasn’t a perfect man. The fictitious Capt. John H. Miller wasn’t either. Jesus was. “…but while we were still sinners, Christ died for us.” He died specifically for each of us, and it would be an unbearable burden if we allowed it to be. The difference is that His last words weren’t “Earn this,” they were “Father forgive them, they know not what they do.”

None of you know Claudio Patino like I did, but you do, or can know Jesus. I struggled for years to earn the grace Christ gave to me, just as I struggled for years asking why my brother died on an unnamed hilltop in Afghanistan while I survived. The answer lies in knowing we can’t earn it. We can be grateful for the sacrifice, accept what it has done for us, and live our lives in honor of it.

This article first appeared in The Havok Journal on 8 August, 2015.

Nate Coffey spent four years attempting to become a preacher, and later a chaplain. After deploying with the Marine Corps, Nate realized that being a Scout Sniper was way more fun, and hilarity ensued as he spent the next eight years attempting to do that job for the glory of our republic and our illustrious Corps. After deployments to Iraq and Afghanistan, as well as a stint as a WPPS contractor, Nate set down the gun and devoted his life to teaching his family (and indeed the world) the wonders of beards, improper civilian attire, knife hands, and the DD214. He is a fan of chick flicks like “Commando” and “Boondock Saints.”