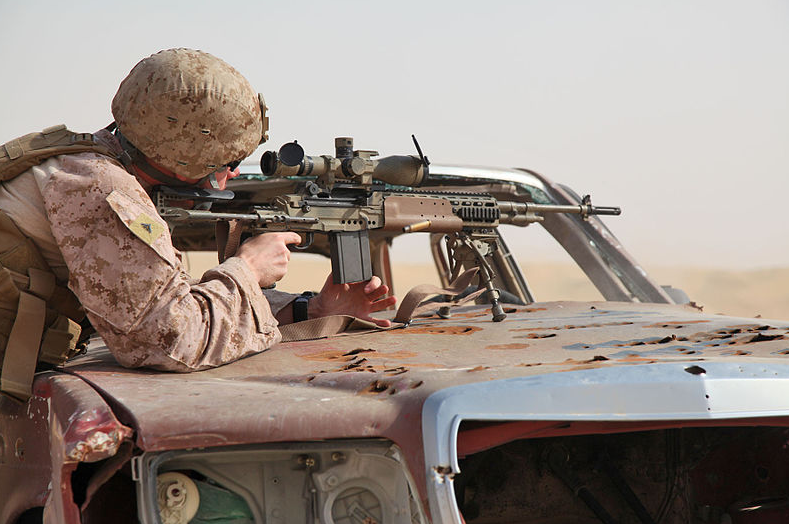 My concept of grace has, like most things in my life, been shaped by experiences in combat.

In June of 2010, I had the honor of serving as a team leader for a Marine Corps Scout Sniper team in Musah Quelah, Afghanistan. Our company was to clear the town of its Taliban presence, and when things got really hairy, the whole battalion came to join the fight. Cpl Claudio Patino IV was a Marine on my team, and he was the living pulse of it.

My eight-man team, Shadow 2, was a very effective unit, and we got hard results. I’ll leave the details out of it, but we were very good at our jobs. Quite a bit of our actions against the enemy was due to the insane courage and tactical proficiency of this one man.

He was not a “good” man in the sense that most of us see goodness, but he was very good at being a man. He was a rough individual with a sharp tongue, and he had no patience for weakness. His language wasn’t clean. He wasn’t in Afghanistan out of some poster boy sense of duty per se, and I don’t know that he was there because he saw himself fighting for the freedoms of Americans.

Most of our country didn’t want us over there, and fewer still had any concept of the men and women sent to fight in that foreign soil. I believe that, like most of us, he was somewhat disgusted with the state of our nation and its citizens who couldn’t care less about a 20-something-year-old man duking it out with third-world insurgents. He was there for the fight. There was a war going on, and he wanted in on it.

His main passion in life was fighting. He was skilled in hand-to-hand combat, so much so that I designated him our team instructor. Every night we had free was spent in the “gym,” which was really a tent with a pull-up bar, a small wrestling mat, and a punching bag made out of bricks or something, learning from him how to punch each other in the face.

He was an excellent marksman, even amongst a team of Scout Snipers. He could engage the enemy with his hands, a blade, a pistol, or with a rifle from 1,000 yards away. Which he did. A lot.

When someone dies, it is customary for us to never say anything negative about him or her. We choose to remember only the good things and forget any negative aspects of that person. Not so with Claudio Patino IV. There was no pretending that he was a good Marine, and we weren’t forced to forget bad things about him. All of those good things you say about someone after they’re dead, we would say about him while he was alive. Those that knew him could often react to him just by shaking their heads in wonder. Amongst the Marine Corps infantry, and amongst a group of skilled snipers, he stood out as a paragon of skill, ferocity, strength, speed, and bravery.

Why tell you all of this? I want you to know that this man was the best we had to offer. I want you to get a sense of how we all idolized him, even while he was living. I looked up to him, and I was his TEAM LEADER, and I was about ten years older than him. There were actually times when I would give an order, and the guys in my team would automatically look at him to see what he thought about it. We idolized him in life, and in death.

I remember his death well. Patino had seen some movement on a hilltop in the distance. He wanted to go check it out, and he took three other teammates with him. I remember him getting to that hilltop and collapsing, and I heard the automatic gunfire a half second later. I remember seeing the rest of the team unleash hell in the distance and the strained voices on the radio. As the rest of us bounded up to their position and I asked for an update, one of the guys calmly said over the radio, “Patino’s dead.”

The next two hours were a blur of gunfire and radio traffic, as each of us took turns performing CPR on the body of our brother, while our corpsman attempted every life-saving intervention he could. The mangled bodies of the Taliban fighters who shot him lay crumpled close by. Aircraft flew overhead, bombs were dropped, shots were fired, and more injuries were sustained.

Only a matter of weeks passed before I stood before his parents with two of my brothers, giving an account of the death of their son. I had to stand in front of them with a fellow teammate, and explain to them how this had happened. How do you apologize to a man’s family after he dies while you’re in charge of him?

His family was more than gracious to us. They met the battalion when they came back from Afghanistan, and they did is with pride knowing that these were the men next to their son and brother when he fell in battle.

Most of you will not remember his name after reading this. I wouldn’t expect you to. You didn’t know him. You didn’t fight battles with him.  But I did.

I have his name carved into the flesh over my heart, and I named my son after him. His death had such a profound impact on me and how I live my life. I look at his parents and siblings and wonder if they would see my life as worthy of his death. I look at my wife and children and wonder if my life will have the same impact on them.
(continued on next page)