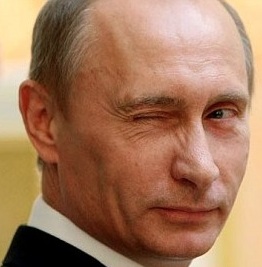 Yesterday, Vladimir Putin received approval to enter into the ‘Kobiyashi Maru” scenario that is Syrian Civil War.  He didn’t waste any time and by lunch, Russian bombs were falling on Rebel positions in Homs, where in recent days they have been pressing the regime hard.  Quick on the heels of the Russian strikes was the commentary from various corners of the media sphere extolling the strength of Putin and unfavorably contrasting the United States and Coalition efforts against ISIS.

There is the really weird logical gap with some folks when it comes to analyzing Vladimir Putin.  He is ascribed alternately as a genius who is constantly twenty steps ahead of America – and then praised/admired as a figure who is strong and full of resolve with a further implication (or hell, flat out saying it) that our current leadership is neither.  Frankly, some of the praise seems to have reached unseemly levels and I also detect a fair amount of viewing Russia and other actors through preconceptions which no longer correspond with reality…if they ever did.

I also happen to disagree and don’t think Putin is a masterful strategist.

First, let us get past the hysteria of Russia’s efforts in Syria.  They have put in a couple hundred troops and some heavy equipment in Latakia – well away from where ISIS holds territory.  They have deployed according to news reports a couple dozen aircraft and may be deploying some attack helicopters soon.  That’s it?  Why is it that folks believe this relatively paltry level of capability can decisively turn the tide of fight when the United States couldn’t achieve the same feat with tens of thousands of superbly equipped troops and hundreds of warplanes one country over?

The Soviets certainly couldn’t do it in Afghanistan in the ’80s with a much more impressive capability than they have on the ground in Syria now.  Sure, the Russians could put more troops in but they are not an expeditionary force…they don’t have the capacity of professional soldiers (they still are largely a conscript army and are by law not allowed to deploy them out of country).  They also lack airlift, power logistics or any of the other things you need to sustain a large force in sustained combat at a distance.  Given their commitments in their country including their fight in the Ukraine, they don’t have the juice to make more than a supplementary effort in Syria.

Second, what is the incentive for Russia to get deeply involved in Syria?  Russia has a long term patronage relationship with Assad and their single overseas military base in Syria is a matter of prestige for them – they will contribute to Assad for that alone.  But the idea that Russian troops would get into a sustained engagement in Syria and that the Russian population would tolerate such a thing is fantastical.  The lengths that Russia had to go through to hide their involvement in Ukraine from their own public (which was interesting because the cause in Ukraine is popular with Russians but not their troops fighting there), an engagement that mattered to them far more than Syria, should be a good indication that they would have a very difficult time trying to justify fighting an overseas war – one that would invariably involve lots of Russians going home in body bags.  Putin is popular but he also recognizes the mercurial nature of the Russian population.  They don’t want a war in Syria.

Finally, a lot of recent noise has been made about Iran, Iraq, Syria and Russia agreeing to share intelligence to fight ISIS and how this presages some dramatic global realignment of power. I would say hold your horses.  Russia and Iran are historical competitors.  Certainly recent confrontations with the West have pushed them together but it is not a natural pairing – Russia is deeply afraid of Iranian natural gas and oil further depressing prices post-sanctions.  Iran finds itself overextended fighting proxy fights on various fronts so they probably don’t mind the Russians dipping their toes into the pool in Syria but I imagine that they are wary of the Russians trying to usurp their influence and are aware of the limits of Russian largesse – after all wasn’t it the Russians that joined the sanctions regime against them a few years back?

So what is Putin’s game here if he can’t and isn’t in it to win it?

Putin’s position in Russia is not a particularly good one over the long term.  He is stalemated in Ukraine which in some ways serves his purpose in checking Ukrainian ambitions in the short term, except he is now saddled with an increasingly voracious and unruly dependency of a non-performing population and gangster militias.  His economy is being wracked by depressed oil and gas prices which he has come to rely on.  As Europeans seek to diversify their sources away from Russia, the proposed Chinese natural gas pipeline which was supposed to mitigate the bleeding is increasingly looking like a white elephant.

Educated Russians are leaving his country in droves – and taking their money with them.  Putin made himself a Dictator and has grabbed the reins of media and power – but the cracks are starting to show that the Czar has no clothes.  He remains personally popular, through herculean and increasingly draconian measures.  That will run out some day if Russian history is any indication.  The only game he can play – heck, the only game he has ever played – is to bait and switch.

That is what is going on in Syria now.  Russia can’t really win in Syria and Putin knows this.  But what he can do is deflect attention from his actions elsewhere and try to brand him as some great defender of the global order.  It is no accident all of this is occurring at the time that all the world leaders is meeting at the United Nations.  Russia needs a confrontation because that is the only time they are able to achieve any sort of internal unity and key to his high poll numbers – Russian pride is alive and real.

Putin is putting a stick in our eye in order to project strength inside his own country, something which always plays well with the paranoiac Russian population.  If Russia can achieve additional prestige in order to mitigate their already tarnished global reputation, then that would be great as well – after all the sanctions are really starting to bite and over the long term will really damage a Russia that needs to trade with the West.  He can’t deploy a massive force or really tip the scales in a meaningful fashion, but he sure can make a lot of noise, soothe the Russian pride and discredit the United States and that is a good day’s work for a minor investment.

Unfortunately for him, I think it will ultimately backfire.  His partner in Syria is utterly non-viable and ruling a fifth of country which has been transformed into a wasteland where half the population has fled and all meaningful industry has been pretty much disrupted and destroyed.  Assad can’t win this war militarily without massive help – more than Iran or Russia can provide.  Russia is already dealing with one debilitating resource drain in the Ukraine, congrats, welcome to an even bigger basket case which is unfortunate because your checkbook can’t handle another life support case.

Russia has now chosen the Shi’a side in this Civil War and will now become anathema to the Sunni nations of the region.  How long do you think before every other Jihadist, particularly the Russian nationals fighting, gets in their head that Russia needs to be a target?  How long before a nation like Turkey, another Russian competitor with a strong dislike for Assad gets sporty?  How long before Israel gets nervous about potential advanced weapons transfers to Hezbollah through the Syrian military and they decide to send a message? Putin sees himself leading some grand international coalition in Syria but who is going to sign up for it and commit skin in the game who hasn’t already done so?  It is incredibly easy for Russia to get into this situation but they are going to quickly find out, as we have, that this situation has a habit of making you look really foolish.

In the end, Putin is a brilliant tactician.  He has great instincts for finding new and inventive ways to be obnoxious in a uniquely Russian way.  In some ways, he is the geo-political version of the Joker – an agent of Chaos.  But he is an exceedingly poor strategist.  Every tactical move he makes spawns more strategic dilemmas which he seems unable to plan for and handle.  He doesn’t seem capable of stringing together decisions to achieve decisive and long lasting positive effects – he is starting every game with a progressively weaker hand – and hence has to rely on his improvisational skills, which are admittedly impressive but they don’t solve the resulting problems, only postpones the reckoning.  Eventually those problems will catch up and cascade on him and bring about a failure state.  In the United States, people don’t get re-elected when that happens.  In Russia, well…it historically isn’t pretty.