HomeWorldAfricaSomalia: Beyond “Black Hawk Down” 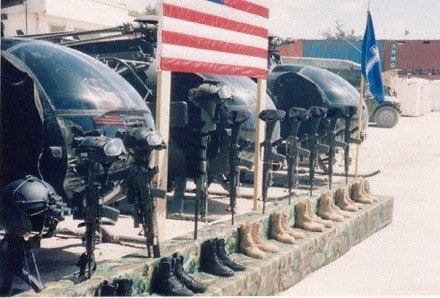 It may be nearly impossible today to find many veterans who don’t know the story of “Black Hawk Down.” One could argue that that event, or rather that series of events, is maybe one of the greatest military moments in the last 30 years. While it started with planned mission that ended with major casualties, it is a story of a small group of brothers who fought for each other, against many odds, and how those who survived endured  an ordeal that few of us will ever fully understand.

In the early 90’s, Somalia was governed by President Jaalle Mohamed Siad Barre. Barre was Somalia’s third president. He had previously served in the Somalian Army under Somalia’s second President, Abdirashid Ali Shermarke. In 1969, Major General Barre led a coup against Somalian President Shermarke that would end with the assassination of the President, and Major General Barre declaring himself as the new President of Somalia. Shortly after declaring himself President, Barre suspended the Somalian constitution, banned political parties, and dissolved the parliament and the Supreme Court.

By the late 90’s, Barre’s presidency had grown into a dictatorship and the citizens of Somalia were tired of his totalitarian rule. Resistance groups, supported by Ethiopia, began to pop up around the country. Some of those resistance groups were nonviolent political groups. However; some of those groups were violent groups whose only goal was taking the power for themselves. This ultimately led to a civil war in Somalia in 1991. During Somalia’s civil war the government collapsed, and Somalia’s third president was exiled from the country. Barre died while living in Nigeria in 1995 from a heart attack.

Ironically, the main figure responsible for Barre’s exile was one of his own Generals from the Somalian Army, General Mohamed Farah Aidid. After Somalian President Barre was ousted, neighboring countries gathered in Djibouti and held an election, ultimately voting Ali Mahdi Mohamed as President of Somalia. President Mohamed was officially recognized by the International community as the President.

General Mohamed Farah Aidid did not agree with the outcome, and claimed he was the President of Somalia. Aidid formed an armed resistance group known as the United Somali Congress and vowed to fight the decision made by the neighboring countries.

Meanwhile, with no government in Somalia, the local population was dying from starvation. Three hundred thousand people died in the early months of 1992 and another 3 million fled the country as refugees. Of the Somalian population of 10 million people, over half were in severe danger of starvation and malnutrition-related disease, mostly in the drought-stricken rural areas.  In the capital city of Mogadishu, two main factions violently battled for power, one supporting Interim President Ali Mahdi Mohamed and the other supporting the United Somali Congress, lead by Aidid.

To help stabilize the region and provide much need humanitarian assistance, the United Nations formed the United Nations Operations in Somalia (UNOSOM) effort and began trying to deliver food to Somalia. Because different parts of the country were controlled by different warlords, very little of the food made it to the Somalian population, and to make matters worse, rebels began attacking the UN’s ships delivering food, cargo aircraft were fired upon, and aid agencies, public and private, were subject to threats, robbery and extortion. In November of 1992, Aidid, who was now considered a leading warlord, demanded the UN leave and declared hostile intent against UN personnel.

At this point, the United States offered to help the UN establish a multinational force under its own leadership to secure the humanitarian operation. This offer was accepted by the UN Security Council, and what became known as the Unified Task Force (UNITAF) was authorized to utilize “all necessary means” to ensure the protection of the relief efforts. This change also became known as UNOSOM II.

UNOSOM II was comprised of 36 countries, although primarily manned by US troops.  UNOSOM II’s initial goal was to secure Mogadishu, transition the city back to the Somalian government and then move south to secure the rest of the country.

Warlord Aidid felt the UN was trying to oust him, and ordered Somali-run radio stations to broadcast anti-UN propaganda. Coincidentally, on 5 June, a Pakistani force was sent to investigate an arms depot belonging to Aidid. Aidid feared the Task Force had actually been sent to shut down the anti UN broadcasts and ordered an attack on the Pakistani troops. When the Pakistani force arrived, they encountered angry Somali protesters. The result was 24 dead and 57 wounded Pakistani troops, as well as 1 wounded Italian and 3 wounded American soldiers.

The next day, the UN passed Resolution 837, which authorized UNOSOM II to “take all necessary measures against those responsible for the armed attacks and to establish the effective authority of UNOSOM II throughout Somalia.” This was essentially equivalent to the UN declaring war on Aidid and his army, a declaration that would lead to numerous confrontations between UNOSOM II personnel and Aidid’s militia.

On 12 June, U.S. troops started attacking targets in Mogadishu in hopes of finding Warlord Aidid, one of those targets led them to a safe house where Aidid was reportedly hiding in Mogadishu. During the 17-minute combat operation, U.S. Cobra attack helicopters fired 16 TOW missiles and thousands of 20-millimeter cannon rounds into the compound, killing 60 people. Aidid was not present at the safe house.

The number of Somali fatalities was disputed. Warlord Aidid’s Interior Minister, claimed 73 people were killed, including women and children who had been in the safe house. The reports the U.S. got after the attack placed the number of dead at 20, all men. The operation also lead to the deaths of four journalists, who were killed by angry mobs when they arrived to cover the incident.  Some believe that this attack was a turning point in unifying Somalis against U.S. efforts in Somalia.

On October 3, 1993, Task Force Ranger raided a hotel in Mogadishu in which Aidid was thought to be hiding. What ensued was the longest, bloodiest and deadliest battle for US troops in Somalia. In what later became known as the Battle of Mogadishu, eighteen US soldiers were killed.

There are lots of great books on what happened in the Battle of Mogadishu. If you want to know more, check out some of the following books:

All Secure: A Special Operations Soldier’s Fight to Survive on the Battlefield and the Homefront — By Tom Satterly

In the Company of Heroes – By Michael Durant

The Battle of Mogadishu – By Matthew Eversmann

Black Hawk Down: A Story of Modern War – By Mark Bowden

Madness in Mogadishu – By Michael Whestone

Republished in remembrance of the Battle of Mogadishu- October 3, 1993. This article first appeared in the Havok Journal on October 3, 2018.