HomePoliticsInternationalPutin’s Miscalculation? Clausewitz’s Trinity and the War in Ukraine 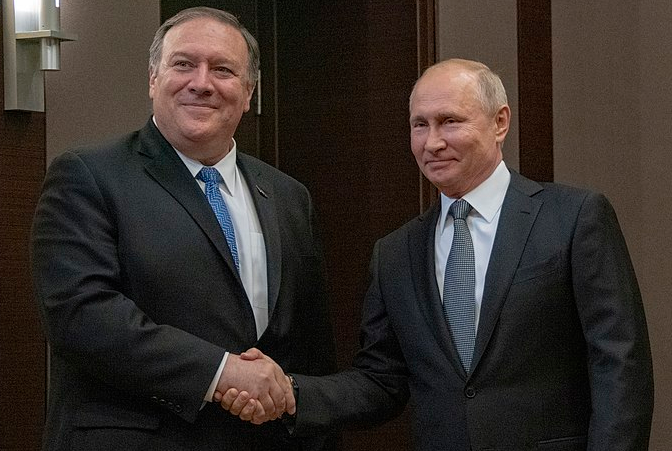 “War is nothing but a wrestling match on a larger scale”

Recently, U.S. intelligence officials admitted that they misjudged Ukraine’s ability to defend itself against Russia’s invasion.  A miscalculation on the part of intelligence agencies that have otherwise been accurately predicting Russian military activities and intentions with a high degree of fidelity.

“My view was that, based on a variety of factors, that the Ukrainians were not as ready as I thought they should be,” said Lt. Gen. Scott Berrier, director of the Defense Intelligence Agency. “Therefore, I questioned their will to fight. That was a bad assessment on my part because they have fought bravely and honorably and are doing the right thing.”

Why is it so difficult to predict the outcome of the current conflict in Ukraine? Why has President Vladimir Putin underestimated the will and tenacity of the Ukrainian people to resist the Russian invasion as well as the overwhelming global condemnation of his “Special Operation?”

The prediction of Russia’s intent to invade Ukraine and the limited success thus far of Russia’s invasion, perfectly illustrate what the military theorist Carl von Clausewitz described in his seminal work, On War, as the difficulty of predicting the outcome of any armed conflict.

In the run-up of the invasion, U.S. intelligence applied its vast array of capabilities to scientifically tabulate, identify, correlate, measure, and thus make highly accurate assessments of the task and purpose of Russian forces arrayed on the border of Ukraine. But once the fighting began, the scientific and analytical approach to assessing the consequences became far less predictive, much more uncertain, and as the conflict continues, Clausewitz’s supposition on the nature of war once again proves accurate.

Clausewitz spoke of the nature of warfare, and its outcome, as being influenced by a “trinity of forces,” that trinity being reason, passion, and probability in simplified terms. First and foremost, Clausewitz argued that war is exclusively a human endeavor and therefore, as unique in its possible outcomes as those individuals who fight in it. Secondly, Clausewitz contended that war is neither art nor science and attempts to quantify and qualify war in systematic methodology or purely in analytical terms show the futility of such an approach. The human dimension to war and the conduct of war by its leaders can make war characteristically irrational.  Even the Director of the vaunted Defense Intelligence Agency admitted that he did not anticipate the ferocity with which the Ukrainians would defend their homeland.  Finally, Clausewitz believed that war, by its nature, is impacted by “ethereal forces,” actions and circumstances unanticipated and uncontrolled. That chance, unforeseen events, and the “fog of war” can impact the outcome of armed conflict despite all other considerations.

War is social intercourse according to Clausewitz and therefore defines human interaction at its most basic and violent level. In war, each warrior is distinctive, unique and adds an intangible influence into the conduct of battle that can never be fully comprehended or predicted. Weeks ago, few would have predicted that Ukraine’s President Volodymyr Zelensky would rise to become a wartime leader compared to the likes of Winston Churchill.

Clausewitz stated further that “War is merely a continuation of politics,” while accurate, this statement was not intended as a statement of fact only.  It is the antithesis in the dialectical argument whose point is that “war is nothing but a duel; a wrestling match, on a larger scale.” Clausewitz would argue that war is neither “nothing but an act of brute force” nor merely “a rational act of politics or policy decisions.”  Rather, war is a synthesis of this “fascinating trinity” a dynamic, inherently unstable interaction of the forces of violent human emotion (passion= the irrational); rational calculation (reason), and the non-rational actions of chance (probability.)

War is often approached as a science, synthesizing, and analyzing war and warfare, breaking it down into independent component parts for study, counting tanks, artillery pieces, and combat aircraft.   However, because war is fundamentally a human endeavor it is neither an art nor a science. The object of science is knowledge and certainty, while the object of art is creative ability. Of course, all art involves some science (the mathematical sources of harmony, for example) and good science always involves creativity.

Tactics possess a more scientific character, while strategy is something of an art, but the conscious, rational exercise of “military strategy,” a term much beloved by theorists and military historians, is a relatively rare occurrence in the real world. “It has become our general conviction,” Clausewitz said, “that ideas in war are generally so simple, and lie so near the surface, that the merit of their invention can seldom substantiate the talent of the commander who adopts them.”  Most real events in war are driven by incomprehensible forces like chance, emotion, bureaucratic irrationalities, and intra­-organizational politics.  And a great many “strategic” decisions, such as the decision to invade Ukraine, are made unconsciously, often long before the outbreak of hostilities.

War-making has a quality more in the domain of the arts. The purity of scientific processes seems incompatible with the fundamental nature of war.  As we have witnessed recently in the war in Ukraine, scientific calculation clearly favored a quick victory by the numerically superior Russian forces.   However, war is a form of social intercourse, and like other forms of social intercourse, be it commerce, litigation, or politics, its outcome is anything but guaranteed. The distinction is crucial. In both art and science, the actor is working on inanimate matter (or, in art, the passive and yielding emotions of the audience), whereas in business, politics, and war the actor’s will is directed at an animate object that not only has independent actions but also has intangible and irrational reactions, capable of independent actions of its own. The fierce resistance of Ukrainian forces is a prime example.

Thus, war is permeated by the unknown.   As war is a human action to compel some humans to submit to the will of other humans, it is never a unilateral activity.  It is a wrestling match, a contest between independent wills, in which skill and creativity are no less important than personality, human emotion, and the various dynamics that characterize any human interaction.

War may have a grammar of its own, but not its own logic, the logic of war, like politics, is the illogicalness of social interaction.  While Putin may have carefully explored the physical and technical aspects of a war with Ukraine, the theory of war concentrates and resides on the human psychological and philosophical side, areas that he seems to have neglected in his calculus. While categorizing war as science makes it easier to analyze and understand, it only marginally addresses the complexities that exist in war.  Fortunately, Putin’s misunderstanding of the trinity may prove to be the undoing in his ill-conceived invasion.