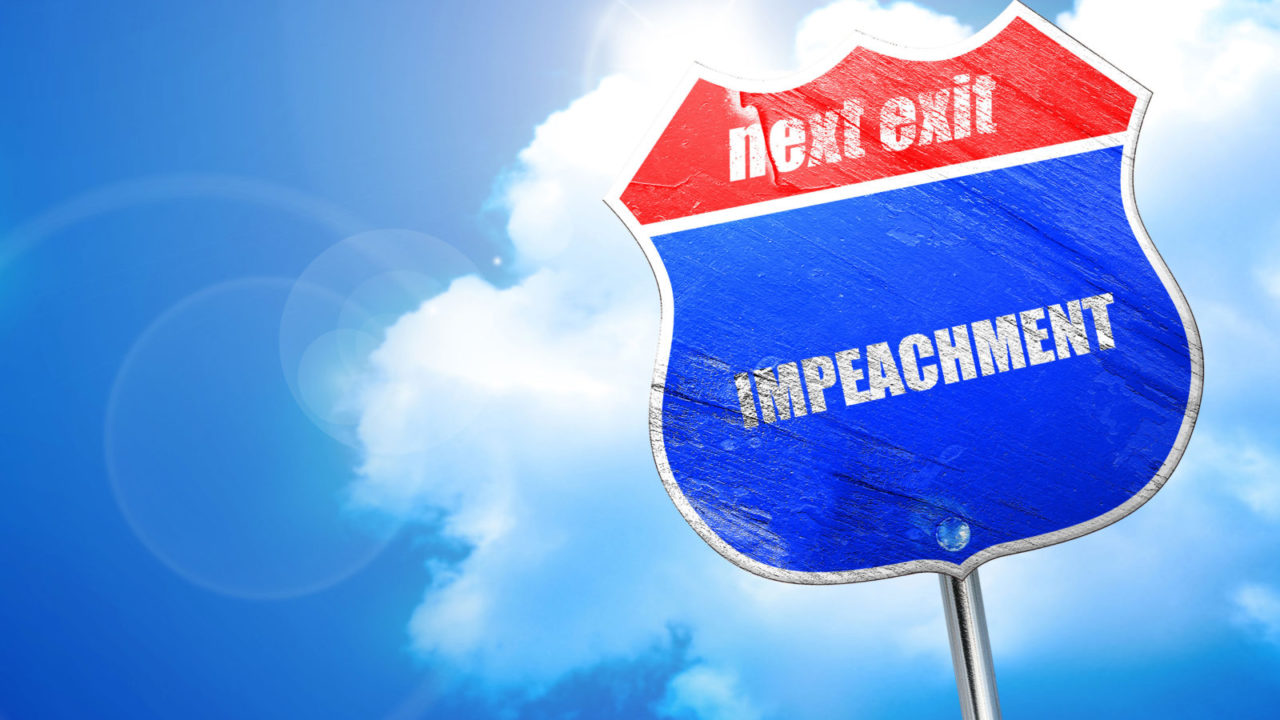 When Hillary Gets Impeached
By John Chandler

Over the last week, election predictions have increasingly predicted a Hillary Clinton Presidency. Progressive Democrats are attempting to shape the next cabinet, and Donald Trump seems to be preparing excuses for his defeat. As of this writing, fivethirtyeight.com, a website dedicated to predicting outcomes based on statistical probabilities, is predicting an 82% chance of a Clinton win. However one piece of news released at the end of the week has the potential to turn those predictions on their heads.

No, Donald Trump is not going to mount a surprise comeback. The FBI announced that it is reopening its investigation of Clinton’s email practices in light of new information.

During an investigation into Anthony Weiner’s latest improper escapade, the Bureau evidently “learned of the existence of emails that appear pertinent to the Clinton investigation” according to FBI Director James Comey.

After the jokes surrounding inappropriate wieners dicking up another President Clinton’s legacy (and my greatest contribution as a writer might just be getting that ball rolling), we must consider the possible outcome that the investigation turns up some criminal wrongdoing by Hillary Clinton. Federal investigations are rarely concluded in less than two weeks, so we are safe in assuming that any charges filed would be after the new President Clinton has been sworn in.

The Republican party would love nothing more than to use another Clinton impeachment to distract from its own struggles, but after the dust settled the country would be left with President Tim Kaine. So what does that mean for America?

Well probably a classic case of setting out to please everyone and ending up pleasing no one. Kaine is a centrist in his politics and wholly uninteresting in his personality. That is going to upset much of the progressive left that saw Clinton as being too cozy with Wall Street to bring the kind of financial reforms they believe are necessary. Clinton, as an aside, might have missed a chance to dodge a Republican impeachment had she named someone like Elizabeth Warren as her running mate.

As much as Republicans dislike Clinton, she’s more willing to come towards the Right and work across the aisle than some of her fellow Democrats. Instead she has set Kaine up for at least four years of fighting off Republican allegations that he was complicit in Clinton shadiness and stealing the Democratic nomination from Bernie Sanders (cue the inevitable ‘dick move’ jokes).

The Left will attack President Kaine for not being Left enough. The Right will attack him for being a Democrat and more specifically a Democrat with close ties to Hillary Clinton. With clowns to the left and jokers to the right, Time Kaine will be stuck challenging Gerald Ford as modern America’s most forgettable President.

The Kaine administration will probably never be remembered as a high point in American politics, nor should it be. It can, however, serve as a means for both parties to find nominees that the American people actually want. There is no one to serve as heir apparent to the Presidency, a title Clinton assumed after some considerable argument. Bernie Sanders will be 79 in 2020 and likely too old to be seen as a legitimate contender for the Presidency.

The GOP has gotten several different wake up calls in the form of Donald Trump and will likely not make the same mistake again. What will probably result is Paul Ryan running against a progressive Democrat, probably Elizabeth Warren unless a new challenger emerges. Republicans can get excited about a young, charismatic candidate that cares more about Conservative values than bashing his opponent.

Democrats will have a candidate that has made a name for herself trying to address perceived systematic inequalities, a platform that is becoming increasingly popular in the party’s younger members. That election will be the issues based battle that America deserves rather than the personal mudslinging that has come to characterize 2016.

Until then, the country will likely be stuck in limbo. A Congress focused on an impeachment is unlikely to be able to pass a budget, which means that the Department of Defense will be faced with four more years of budget uncertainty, which has the potential to seriously cripple American security interests.

Infrastructure development will likely make little to no progress. The American healthcare system will likely worsen. Obamacare may or may not be dying, but it definitely is not improving and is unlikely to be overhauled in the next four years. Tim Kaine’s roll as President will be one akin to a driver skidding on an icy road: we’re going to crash, and all he can do is make it hurt as little as possible.