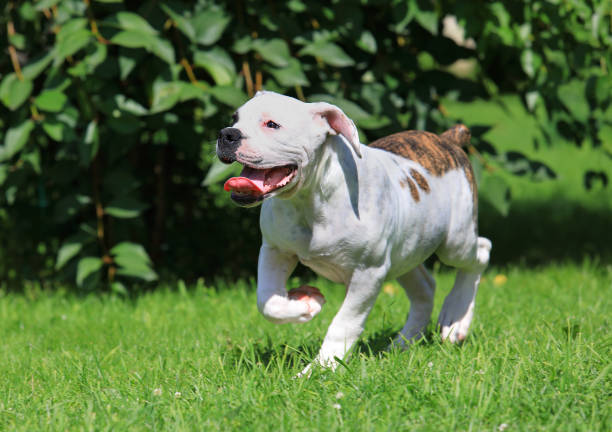 Many believe (especially dog enthusiasts) that everybody has a type of dog that suits them. Have you experienced never making a connection with any dog you see? Maybe you just need to find a canine that suits your personality, habits, and temperament. If you’re looking for a fierce guard dog with a terrifying appearance yet affectionate, gentle, and sweet to its owners, then the American bulldog breed might be for you.

According to pet owners and veterinarians, American Bulldogs are dependable and strong, a preferred breed to help around vast farms. They can be assigned to herd livestock or guard property, as they are a protective bunch. However, they have a terribly stubborn streak (read more) which gives you, as the owner, difficulty in handling them during traveling. Many owners opt to leave them at home during vacation and only travel when they’re moving houses.

Have you taken an interest? Read more to get to know this breed, tips in caring for them, dos and don’ts, and much other useful information you can utilize to take care of your American bulldog holistically.

Why is it important to know about this type of breed’s evolution through the years? Believe it or not, it developed its personality and physical structure due to the activity it had undergone throughout the years before.

Way back in the 17th century, bulldogs were used for a sport called bull baiting. This activity was gruesome and inhumane and was promptly shut down after bulldogs found a new home in many English homes: as a protector of families. The breed became so popular it eventually became the unofficial mascot of England.

Due to the strength and bulky built it has, bulldogs were brought back to North America as working dogs on farms. Its strength and agility allowed it to herd livestock, such as sheep and cattle, as well as double as a property guard. Eventually, bulldogs were bred with other species, and the American bulldog came to be. Its intelligence and ferocity rival that of its parent breed. However, American bulldogs are more gentle and clingy to their owners.

This breed is one of the most active ones out there, which makes sense to incorporate their diet with a lot of protein daily. Today, many alternative dog foods are available in the market, many of them with meat as their first main ingredient, but make sure to choose those with added nutrients, like omega-3 fatty acids and minerals.

Choose a brand with minimal carbs as well to avoid obesity. This is important because an American Bulldog tends to put on weight fast (link: https://www.frontiersin.org/articles/10.3389/fvets.2017.00059/full), despite their active lifestyle. Talk to your veterinarian about your dog’s diet and create a well-balanced diet with them that ensures full nutrition as well as safety for their health.

The frequency of your dog’s meal can depend on their current weight. Normally, two to three small meals a day is deemed enough, but if your bulldog is on the heavier side, it’s wise to cut off at least half of their usual meal. Instead, make sure to fill in nutritional gaps with multivitamins.

Exercise, Lots Of It!

Bulldogs need exercise like other breeds. However, this particular type of dog loves the outdoors. Thus, as its owner, you have an obligation to take it to frequent, long walks or even run a marathon with them. Another great way to take care both of their mental and physical health is by visiting dog parks.  American bulldogs are a sociable breed and would appreciate getting to know other dogs and play with them. Just be aware that bulldogs are stronger than most other breeds, therefore you will need a high resistant leash if your friend is not fully trained. You can find these leashes easily online on sites like Neewa.

Since American bulldogs have very fine, short hair, grooming comes easily. Unlike their counterpart (a Shih Tzu, for example), you have little to no concern for tangles, fleas, and other problems rooting from dirt and bacteria. However, this doesn’t mean you don’t need to frequently bathe your American bulldog. They enjoy being groomed by their owners and see it as an important bonding session that fosters lover and trust.

As for nail trimming, ear cleaning, and trimming as needed, American bulldogs follow the same frequency as other dog breeds. Excessive salivating can be one unique problem, though it’s very natural for bulldogs to have excess slobber. In certain circumstances, the saliva becomes helpful in making sure your dog is hydrated. A lot of slobber means they’re having enough water intake, while lesser amounts mean they’re teetering away towards dehydration.

Their Safe Space Is Important

American bulldogs tend to be overly aggressive when jittery and anxious, making it important to provide them with their own space to go to and relax. It can be a doggy bed or an empty, spacious area beside the sofa, as long as they can lay down or nap undisturbed. It’s also recommended to provide a lot of chew toys for them to work on when they feel unease or discomfort. Vets say this will both calm them down and steer clear of your shoes.

All dog breeds have their own common health problems, and the American Bulldog is no exception. Hip/elbow dysplasia is one condition that can occur even in the healthiest bulldogs. It typically occurs in obese bulldogs, but old age can also cause this disease. Neuronal ceroid lipofuscinosis is a unique condition bulldogs seem to have. It’s a gene disorder that entails a lot of damaging symptoms, such as painful muscle spasms, dementia, blindness, and seizures. This can be detected through a gene test and is important for each bulldog to under