HomeNational SecurityIs it “Wrong,” or Not? Fear and Loathing in Terrorism Studies 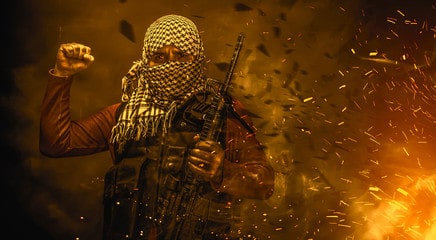 Editor’s Note:  Kim Caccamo is a cadet at the United States Military Academy at West Point.  This academic work product does not reflect an official position of West Point, the US Army, or the US Government. This first appeared in The Havok Journal on August 24, 2020.

The purpose of this essay is to discuss the questions of when terrorism is wrong and what makes it wrong. In society, it is commonly accepted that acts of terrorism are always wrong. This contrasts with the popular notion that conventional acts of war are not inherently wrong, from which it would seem to follow that acts of terrorism are morally worse than acts of war. Atrocities like September 11th, the bombings of Paris in 2015, and the driving of a truck into a crowd in Germany in 2016 at first glance seem so cruel and indiscriminate that they are obviously different from acts of war, and the permissibility of the terrorist acts cannot be argued for in any way. However, philosophers have debated the nature of terrorism and what specifically makes it wrong (or not) without reaching a unanimous conclusion.

One such philosopher, Lionel McPherson, argues that acts of terrorism and acts of war are more like each other than conventionally thought, which should, he argues, force us to adopt either a more critical attitude towards war or less condemnatory attitude toward terrorism. He draws parallels between conventional war and terrorism by discussing three elements the two types of violence have in common: the fear caused by both kinds of violence, due care in combination with proportionality, and the intentions of terrorists and combatants. These parallels are enough for McPherson to reach his conclusion that our permissive attitudes toward war and condemnatory attitudes toward terrorism are inconsistent with each other.

However, I believe McPherson’s analysis is incomplete and therefore flawed. Specifically, I think that McPherson does not adequately appreciate and discuss the implications of the fear terrorism causes in comparison to conventional war; he seems too hastily to dismiss fear as a possible aspect that can justify the fact that conventional attitudes toward terrorism are more critical than our attitudes toward conventional war. While McPherson helps us think about terrorism in a particular way and encourages healthy skepticism about our prevailing views of terrorism and war, the goal of my paper is to offer reasons why we ought not to adopt less condemnatory attitudes toward terrorism in the way McPherson suggests due to this lack of discussion about the fear terrorism causes.

McPherson describes terrorism as “the deliberate use of force against ordinary noncombatants, which can be expected to cause wider fear among them, for political ends” (McPherson 525). This definition is useful for two reasons. Firstly, it is nonmoral, which allows McPherson to avoid the “unproductive and often politicized dispute over the definition” that arises when terrorism is assumed to be inherently wrong (McPherson 527). Secondly, McPherson’s definition captures all the elements that at first appear to be unique to cases of terrorism; it fits our intuitions. For example, terrorism is not the wanton violence of a school shooting. It is not just “violence for its own sake;” it has a political end to achieve.

Additionally, terrorism causes wider fear among citizens in a way other acts of violence, such as assassinations, do not cause. For these reasons, I will adopt McPherson’s definition for my purposes. That I can show terrorism to be worse than war even with his non-moral definition of terrorism serves to strengthen my position. However, I would like to be clear that I am not stating that terrorism is wrong because it causes fear. Rather, I am attempting to argue that terrorism is more wrong than conventional war because of the specific nature of the fear it causes. I can, and do for the purposes of this paper, remain agnostic about whether terrorism is inherently wrong.

McPherson argues that the “brute reality” of conventional war, which includes the risk of death for ordinary noncombatants as a result of conventional acts of war, creates fear proportional to the fear created by terrorism (McPherson 529). “Immediately doubtful,” McPherson concludes from this, “is the popular notion that terrorism is distinctively wrong because of the fear it usually spreads among ordinary non-combatants” (McPherson 529). Some might think that what follows from this plausible claim is that examining fear would not help us morally distinguish between war and terrorism. However, while McPherson may be correct in stating that terrorism and conventional war both cause quantitatively the same amount of fear, my argument addresses the fact that they cause qualitatively different fears. The nature of the fear caused by terrorism is morally worse than the fear caused by conventional war, which is something McPherson’s argument fails to appreciate.

While the exact number of noncombatant deaths is unknown, at least 300 were killed during the battle (World History Project). The average Iraqi ordinary noncombatant most likely experienced the fear that he or she would be killed during the destruction of the city; in fact, 70 to 90 percent of civilians fled the city even before the fight began to try to escape the threat of death (New York Times). Although it is unfortunate that the Iraqi people were scared, the fear they experienced from the effectiveness of this conventional campaign can be separated from the fear they may experience from a standard act of terrorism.

The combat operations in Fallujah in 2004 did not have the intent to cause fear specifically in the noncombatant population; the fear was an effect of a targeted campaign against enemy combatants. In contrast to conventional war, terrorism often uses fear as a weapon to achieve its goals. While the brute reality of war is terrible, I argue that terrorism is morally worse because terrorists have deliberately picked targets to inspire fear in a certain population.

The weaponization of fear is what makes terrorism so distinct from the fear caused by conventional war because the fear is specifically being used to destabilize the society that is attacked, as well as the everyday life of the society that is attacked by terrorists. Therefore, while I remain agnostic about whether this could ever be morally justifiable, the fear seen in acts of terrorism seems morally worse than any fear caused by conventional acts of war because it is something done to both the individuals that are targeted by the act, as well as the broader society in which the acts occur. There is an aspect of the fear caused by terrorism that seeks to shake a society to its foundation, and striking a nation or people in this manner appears to be a distinct wrong not present in conventional acts of war. While I by no means wish to downplay the fear caused by war, nor do I wish to downplay the destabilizing effects war can have, I do want to emphasize that deliberately weaponizing fear in the way terrorism does seem morally worse than causing fear unintentionally and collaterally as in acts of war, which seems sufficient to make terrorism morally worse than war.