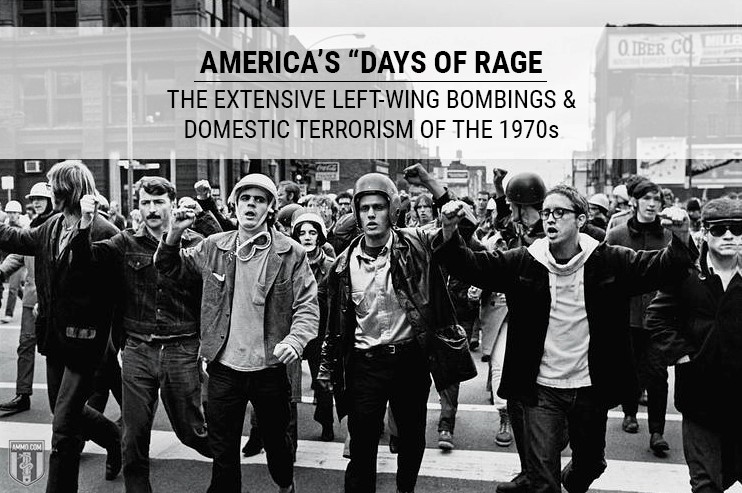 America’s “Days of Rage”: The Extensive Left-Wing Bombings & Domestic Terrorism of the 1970s
by Sam Jacobs

This extremely informative article was originally published by ammo.com. It is re-published here with the author’s permission.

At first, one might think that these were isolated incidents of small-scale “protest” or even minor violence. However, upon even brief examination, we find out that the outpouring of leftist violence over this time period was anything but minor. The most likely explanation for why you have never heard of this until now is that the events of these years have been consciously buried by those who would prefer you not know about them.

As the left once again ratchets up both its rhetoric and its physical violence, it’s time to re-explore this period of American history. What started as a non-violent student movement quickly escalated into a campaign of terrorism against the American people. And while the similarities may not be terribly striking yet, astute readers of this article will quickly see the world in which we live more and more closely resembling the Days of Rage.

The Days of Rage

The Weathermen started out as a faction within Students for a Democratic Society. Without getting too much into the weeds, much of what happens during this period of leftist terrorism in the United States has its genesis in a faction fight between the Weathermen, who controlled the national SDS organization, and the rest of their faction (known as the Revolutionary Youth Movement II or RYM II), who were in opposition to the more classically Maoist Worker Student Alliance.

Tensions ran high because the stakes were high – nothing less than total control of the largest student radical organization in America and all of the spoils that came along with that. Many within the Weathermen faction of RYM II believed that they were fighting literal fascism coming to America in the form of President Richard Nixon.

Sound familiar yet? It’s about to sound a lot more so.

On October 6, 1969, a statue memorializing a police officer killed during the 1886 Haymarket riots was blown up. No one ever figured out who committed this act of iconoclasm, but the tangible effect of the act of political terrorism was the final isolation of the Weather Underground from the rest of the SDS.

The Weathermen then shifted their activity to the Days of Rage, a protest rally with the slogans “Bring The War Home!” Many wielded lead pipes and were clad in football helmets, ready for a confrontation with the police. 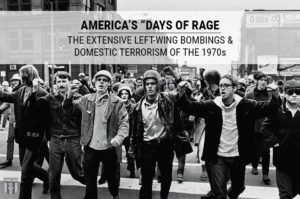 Turnout was disappointing. The Weathermen expected a massive turnout, but only got about 800, who stared down 2,000 Chicago police likely itching for another fight after the 1968 Democratic Convention. By the first night, about 500 had deserted the protest, with about half of the remaining 300 being Weathermen from around the country.

Abbie Hoffman and John Froines, two members of the Chicago Seven, showed up, but declined to speak and left. The remaining hardcore of Weathermen and their supporters shifted the goalposts to simply fighting the police as constituting victory.

At 10:25 p.m., Jeff Jones, one of the leaders of the Weathermen, gave the signal and chaos erupted. The crowd moved through the city, smashing windows of ordinary cars and middle-class homes throughout Chicago, as well as small businesses such as barber shops.

The next day, October 9, a “Women’s Militia” comprised of about 70 female Weathermen planned to attack a draft board office, but were prevented from doing so by the Chicago Police Department. The governor called up 2,500 National Guard members to protect Chicago, and protests for later in the day were canceled. The Black Panther Party’s local leadership attempted to distance themselves from the Weathermen, describing the group as “anarchistic, opportunistic, adventuristic, and Custeristic.”

The next day was the last day of the Days of Rage proper, centered around a march of 2,000 through a Spanish-speaking area of Chicago. The next day, October 11, the Weathermen attempted to reignite the protests, but were quickly sealed off by Chicago’s finest. Approximately half of the crowd were arrested in 15 minutes.

Before continuing with the laundry list of terrorist actions carried out by the Weather Underground, it is worth briefly explaining their ideology. The Weather Underground was not a classically Marxist nor, strictly speaking, a Maoist group. Their cues came more from the American New Left. Thus, much like the radicals creating chaos in American cities in the 2020s, they were far more focused on opposition to the American state, “white privilege” and “white supremacy” than they were in creating bonds across the working class.

In this regard, they differed both from the Maoism of the Progressive Labor Party (made up of former members of the Communisty Party, USA, who supported Mao against Kruschev and thus had very real ties to the American labor movement) and the so-called “New Communist Movement” (comprised of younger student activists sympathetic toward Maoism and Third Worldism, but without organic ties to the existing Communist left and the labor movement). They did not, as some other groups in both Maoism proper and the New Communist Movement did, seek either ties with the American working class (which they largely considered “bought off by imperialism”) or the official sanction of Beijing (a long-term goal of both Maoists and New Communists).

There are three important takeaways from all of this inside baseball:

The Weathermen After the Days of Rage

There were dozens of terrorist attacks carried out in the years between 1970 and 1977. It would be impossible to talk about them all in detail without writing an entire book on the subject. However, some of them are worth pulling out from the pack to discuss individually:

In October 1973, the federal government dropped most of the charges against the Weather Underground because new restrictions on electronic surveillance (without a court order handed down from the Supreme Court) meant that the charges likely would not stick. A more complete – and voluminous – list of Weather Underground terrorist attacks can be found here.

The Black Liberation Army was formed in 1970, by members of the Black Panther Party who operated as members of both groups concurrently. Between 1970 and 1976, the group was involved in over 70 acts of violence, including the murders of 13 police officers. Some of their attacks included:

The M19CO was more classically Marxist-Leninist, but no less eager to engage in terrorism. They broke Assata Shakur, convicted of the murder of a state trooper, out of prison and spirited her to Cuba. They were also involved in the robbery of a Brinks truck in 1981, along with the Black Liberation Army, as well as several bombings, including those of the National War College, the United States Senate, the Washington Navy Yard Computer Center, the South African consulate and the Policemen’s Benevolent Association.

Most people know of the Symbionese Liberation Army, if at all, as the group who kidnapped and brainwashed Patty Hearst. Beyond this, they are an excellent example of how a small, but committed, cadre of left-wing activists can wreak havoc far and beyond their numbers, which never exceeded 22.

Their first major action was the assassination of Oakland, CA superintendent of schools Marcus Foster and badly wounding his deputy Robert Blackburn. The pair were attacked with cyanide-packed hollow point rounds as they left a school committee meeting. Foster, the first black superintendent of schools in Oakland, was assassinated because the SLA believed he was going to introduce identity cards in the school system, which they considered “fascist” and which he, in fact, opposed.

Their most famous action was the kidnapping of Hearst publishing heiress Patty Hearst in 1974. She was held by the group for 19 months before she was apprehended by authorities. At first, the SLA demanded the release of Foster’s assassins, but when this proved impossible, they demanded the Hearst family distribute $70 worth of food to every needy person in California. The Hearst family took out a loan to do so, which would have cost $400 million, but the operation descended into chaos and the SLA refused to free her. The group sometimes restricted Hearst to a dark closet for weeks at a time. She was raped both by leader Donald DeFreeze (“Cinque”) and Willie Wolfe (“Kahjoh”).

When recovered, Hearst had an IQ of 112, as compared to 130 before her abduction. She chain smoked, had a flattened affect and had trouble remembering significant parts of her pre-SLA life. She weighed 87 pounds when apprehended.

The group committed a number of bank robberies both before and after Hearst’s kidnapping.

Most Americans have never heard of these acts of terrorism from leftist groups that were so numerous throughout the 1970s. But this is a prime example of “those who don’t learn from history are doomed to repeat it.” The urban unrest, which has rocked America in the early 2020s, is nothing new. The 1960s saw both race riots and left-wing terrorist groups looking to exploit animosity between racial groups in America.

The question is what are we going to do about it? The answer so far from our elected officials is “not much.” If leftist terrorist cells were willing to go this far when they had active opposition from government and corporate figures alike, what are they going to do when confronted with apathy or encouragement from elected officials and the business sector?

The answer remains to be seen, but will certainly be some variant of “nothing good.”