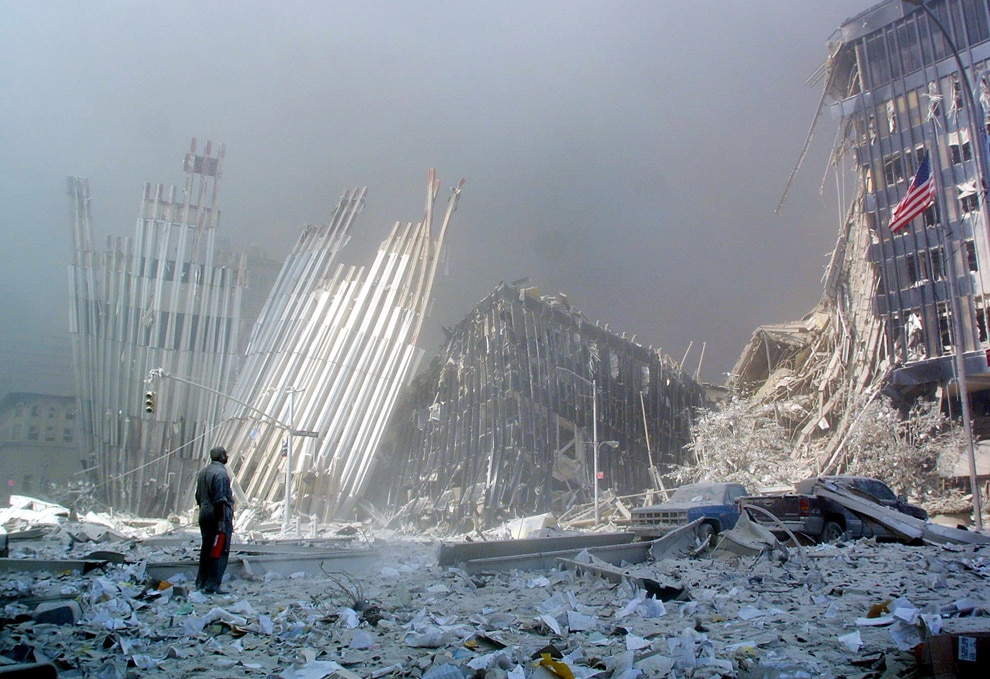 It seems as if it hasn’t been 18 years already, but reflecting upon those memories, so many things have happened since then. It is not hard to close my eyes and see the events unfold all over again. A nightmare that doesn’t end when you open your eyes. Instead, it replays itself over and over again; shear horror captured within different camera angles, each a perspective filled with fire, dust, and falling steel. And within each flicker of frame and light, there were human beings swept into an unparalleled calamity crashing down around them.

From the strike of the first plane, to the collapse of the second tower, it took only an hour and forty-two minutes to forever change our world. And in the 6570 days since that day, each of us have been living within the aftershocks of September 11th, 2001. And for those who were directly affected by the day those towers fell, this day will always remain as a reminder to an end of innocence, the beginning of many painful years, and a day where wounded hearts revisits their moment of unimaginable loss all over again.

I only need ask, “Where were you when the Towers fell?” and each of you could instantly conjure that very moment when you learned the news. Not many events has happened within one’s lifetime that one can say that. For the people of my Dad’s generation, it was the day President Kennedy was assassinated. For the people of my generation we could say the Space Shuttle Challenger explosion. Those are examples that we as Americans could understand and relate to. But what makes September 11th, 2001 unique is that, I bet you could ask someone in Britain that very same question and they would know exactly where they were. I would even wager for those who live in Japan, Egypt, Brazil, or New Zealand. We live in such a connected world that even in the furthest reaches of civilization, among the hum of generators and the swarm of nocturnal insects, I bet flickering televisions were tuned to the live newsfeeds streaming out of New York City and those who gathered around, joined the rest of the world glued to those images.

Amid the black smoke set against the beautiful blue sky, the true character of America herself emerged and was being broadcasted into these homes and common places of nations around the world. What they witnessed that day wasn’t what the terrorists could of ever forseen; not at all. What was on display was the bravery of the American firefighter, EMT, and police who were charging forward into the chaos without regard for their own personal safety. It was the grit and determination written upon their faces as they grabbed their gear and moved further into the desperate confusion. They had put their game faces on and went right to work, dedicating their very lives to make a difference. This was a rare moment that we as viewers got to peer into the daily lives of occupations so familiar to us all and view them in a whole new perspective. For them it was another day of putting their lives on the line, and those of us who were glued to the newscasts, we were witnessing heroes become legends. To borrow a quote from Admiral Chester Nimitz when he spoke of the Marines a Navy Corpsmen fighting on Iwo Jima in 1945, there on ground zero, uncommmon courage was a common virtue. And those first responders inspired all of America with their tenacious spirit, and in the end, they inspired the entire civilized world.

As the steel and concrete of the towers crashed around them, people desperately ran for cover as choking dust filled the air of Manhattan’s skyline. Falling to earth from the towering heights, paper curled and fluttered on the breeze as a fine dust covered every human being turning them into ghastly dust covered silhouettes standing among the carnage. And in the eerie silence that followed, emergency locator devices worn by each firefighter started to beep. This slowly gained company until it ended into large chorus of chirping devices, all of which emanated from deep under the smoldering wreckage of what was 110 stories of American pride; a scene of utter dismay that still evokes a feeling of deep and profound sorrow.

In every tragedy lay a lesson, and that we as Americans should remember and hold close to our hearts in midst the days we live. What made me proud was the compassion of normal,  everyday people coming together, helping each other survive —regardless of race, ethnicity, or creed. This wasn’t an attack on one, it was an attack on all of us. And for those troubled days we were are all Americans — first, foremost, and without preconditions.

There, helping each other out of the wreckage were cops and the common man. Black and white, rich and poor, Muslims, Jews, Hindus, and Christians, — Republican and Democrat; people of all faiths, of all origins, from all corners of the globe. These people shared their last drink from their water bottles, they embraced each other, and they carried each other across the Brooklyn Bridge and away from the calamity and horror. There, in that moment, there was no divide, no bickering, no political agendas; just the fact that we were all humans, trapped within the epicenter of unrivaled carnage. In the ash, smoke, and rubble— it wasn’t just America that was attacked, it was all of the civilized world.

In the days since, America’s sons and daughters have taken the fight to the far off reaches of the world, searching out those who conspired, those who funded, and those who enabled the terrorist organization who led the attack. And in the far off distant lands, hard fought battles drew blood in places whose names were previously unknown to most of us in America. Places now infamous like Helmand Province, Sangin, Korengal Valley, Kunar Province, and Marjeh. Among the driest deserts, the highest mountains, and coldest winters these servicemen and women fought an unrelenting enemy. Across fields of poppy blooms and marijuana, day long battles would emerge. And just as the enemy did in Vietnam, suddenly and without reason, the Taliban would disappear into the Hindu-Kush.

Without reservation, without personal regard, we in the armed forces dedicated our lives to the preservation of our nation. In places where our leaders drew lines in the sand, we stood guard. When the word was disseminated from aloft, we acted. And I was there with them for three deployments in three consecutive years in Iraq where I witnessed this, and I can attest to the bravery, grit, and determination that these sons and daughters of America had in the face of overwhelming adversity.

For those of us who have experienced it, without a doubt, war is Hell. It didn’t have to take the blunt remarks of General William Tecumseh Sherman during the Civil War to discover its meaning— it had been well known long before his day. But to the laymen, war is a time when the unimaginable becomes commonplace, when hope seems a waste of time, and the prayers you speak depends on luck, the cohesiveness of those in your team, and the rate of fire of your weapon. In all of its ugliness, in all of its brutal truths, in all of its dire consequences— there is something beautiful that shines through that is so hard to explain to those who have never witnessed it. And it is this I will draw the comparison of what I witnessed on the battlefields of Iraq to the actions of those who sacrificed their lives on 9/11. Like the FDNY and the NYPD, these warriors of every color, religion, and creed charged forward into the chaos without regard for their own personal safety. It was grit and determination that was written upon their faces as they grabbed their gear and moved further into the desperate confusion. They had put their game faces on and went right to work, dedicating their very lives to make a difference— for all of us.

In my opinion, I believe that we live in a time of too much division, too much bickering, and too much animosity. Let those of us here today remember those lives who were lost 18 years ago and hold them close to our hearts. But let us mirror those who stood up on September 12th, 2001 and emulate that unity, that understanding and compassion. Let us celebrate that we are one people, under God, indivisible. That we may all come from different backgrounds, different upbringings, different circumstances, and sides of the tracks. But we as Americans live in the greatest nation known to man, not by where we come from or the wealth that we possess, but by who we are on the inside. Let not another national tragedy happen before we once again show compassion for one another. Honor those who died 18 years ago by being a better citizen. Take the time to shake the hand of those next to you. Take the time to care for your neighbor. Take the time to appreciate your families and friends. And let us all be the kind of Americans worth fighting for.

This first appeared in The Havok Journal on September 11, 2019.