HomeNationWhy You Can Count Me Among The Enemies of Democracy 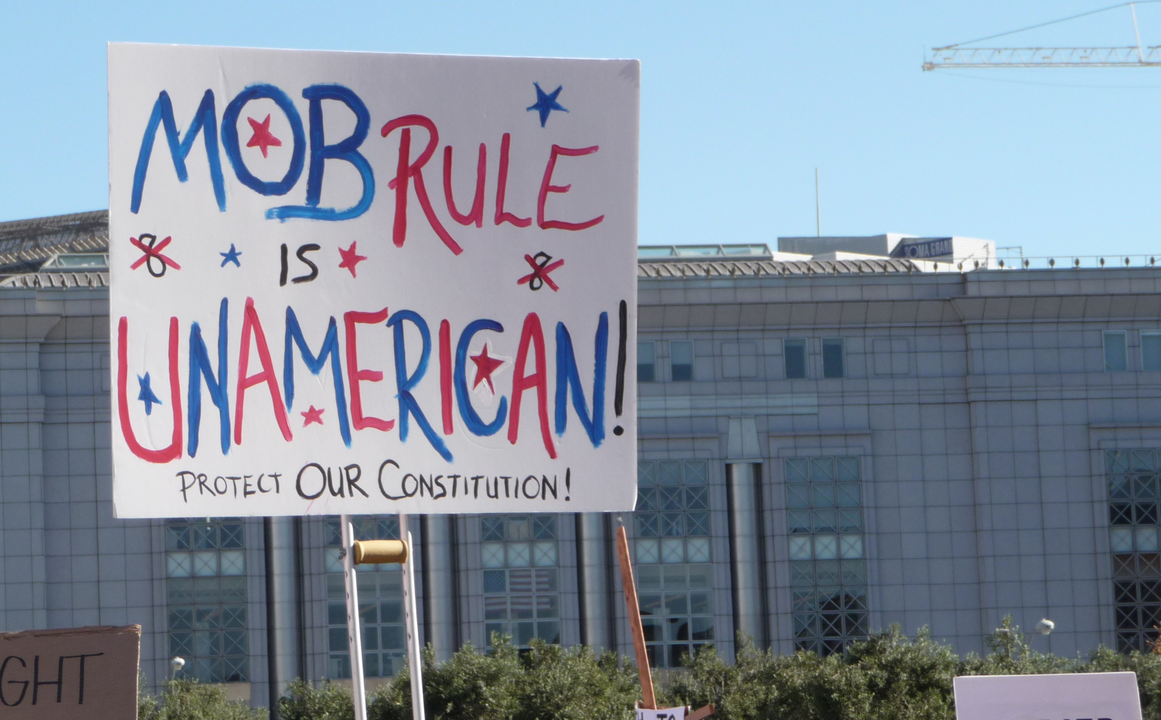 Words have consequences, and along with our deceased founders, I will never call our republic a democracy. I support our (dying) republic. “The United States shall guarantee to every state in this union a republican form of government…” —

Article IV, Section 4, U. S. Constitution. So, after spending huge amounts of time on issues prohibited to the Federal Government, do our DC employees spend any time on this mandate? No! Do they even know what a republican form of government is? I don’t think so.

Congress is allowing every state in this union to have a democracy which can quickly lead to Socialism, Jim Crow, or Sharia with a simple majority vote. The members of Congress are products of our government “schools” and like most other Americans don’t even know the correct definition of the word, republic. A representative democracy is not a republic. Unlike all forms of de-mob-ocracy, our republic tries to prohibit the best-organized mob from instituting destructive or draconian legal systems. This includes Democracy, Jim Crow, Socialism, Monarchy, Dictatorship, and Sharia.

Democrats consider Senator Clinton’s loss in 2016 to be a national disaster, and it certainly was a disaster for them, but this Libertarian has no sympathy for their plight. They have worked hard to reduce our republic (rule of law) to the mob rule of democracy, and they have made substantial progress. Unfortunately for them, the Left Wing has handed a loaded gun to the Right Wing by seriously eroding the protections which our founders put in the Constitution for a losing side.

Due to this change to our government, the stakes have been raised so high that it truly would be a disaster for the supporters of whichever candidate lost, and there is little the losers can do legally to protect themselves until the next election. Therefore, leftists have resorted to Brown Shirt tactics.
Our country’s founders knew that democracy is just as evil a form of government as a monarchy or other dictatorship, and consequently, they mandated a republic.

Democracy is easy to define—the best-organized mob gets to force everyone to march in lockstep with it on every issue, and no protection is given to anyone who is not part of the majority. Leftists endeavor to change our government from a republic into a de-mob-ocracy. Here are some examples::

Left-wing politicians, educators, and the media are constantly drumming into our heads that we have a “wonderful democracy,” and they constantly praise attempts by people in other countries to adopt democracy. At the same time, they have eliminated any use of the word “republic” as much as possible. About the only place for the word “republic” is in the Pledge of Allegiance, and there is seldom a place for the Pledge in our government schools.

Few Americans know that our founders found democracy abhorrent or even know what a republic is. That includes the authors of our dictionaries who give almost identical definitions for “democracy” and “republic.” Our government school “educators” do not teach the extremely important differences between democracy and our republic, distinctions that our brilliant founders fully understood.

Due to the success of the leftist campaign to replace our republic with a democracy, many Americans believe that a representative democracy is what our founders meant when they established a republic. However, a republic is the rule of law instead of the rule of the best-organized mob, but there are many versions. There are profound differences between the rule of law in the Peoples Republic of China, the former Union of Soviet Socialist Republics, and the one our founders mandated in our Constitution. As Horatio Seymour said, “The merit of our Constitution was not that it promotes democracy, but checks it.”

The leftists’ misinformation campaign has been extremely successful in changing our government toward democracy, and the results have been as disastrous for us as it was for the early Greeks who are credited with initiating the idea. Personal freedom and wealth steadily increased during the first period of our country lasting about one hundred years. Then a group of political activists calling themselves “Progressives” sowed the seeds of our current decline when they led the movement to obtain voting rights for everyone. Unfortunately, they did not protect our republic by merely amending our Constitution to correct the perceived deficiencies. Instead, they started calling our government a democracy and changing it into one—a representative democracy.

That change has been disastrous for everyone, including them. A major reason our country is declining is that Americans have bought the lie that our republic is a democracy, and we are acting like it is one. It is indisputable that our country is declining. Our public debt, private debt, welfare payments, foreclosures, anger, and bankruptcies are up, and our business activity, credit rate, literacy rate, manufacturing production, and employment are down. Regardless of how much we Americans tout our beloved freedom, an avowed socialist got substantial support in a bid for President, and our ranking of economic freedom compared with other countries has gradually dropped out of the top ten according to the Heritage Foundation http://www.heritage.org/index/.

In addition to calling the mob rule of democracy “wonderful,” the left-wing misinformation campaign includes attacks on anyone opposing democracy as an elitist who wants to deny the right to vote to all but the richest and best educated among us. However, democracy and universal suffrage are totally independent of each other. The Greeks had a democracy without allowing women or slaves to vote, and we could have a republic with or without universal suffrage.

Possibly the worst, many of our Supreme Court justices claim to have studied the Constitution in prestigious law schools, but they have been basing decisions on the erroneous belief that our government is a democracy. As Chief Justice John Roberts said, “It is not our job to protect the people from the consequences of their political choices.” Since this statement was part of the majority ruling on the mislabeled Affordable Care Act, it is a precedent and therefore a law until changed. In effect, the Supreme Court has denied that the justices have any obligation to honor their oaths to protect and defend our Constitution. Their ruling means that our republic is history and the protections our Constitution previously guaranteed to minorities against a rampant majority no longer exist in America because our government is now a “wonderful” democracy. Consequently, the only protection currently available to us is to accumulate a majority and force everyone to march in lockstep with us.

Ignoring the Constitution and acting as a representative democracy, the majority of Congress has passed and the Supreme Court has allowed numerous laws which allow the majority to trample on the rights of the minority, divide us into warring factions, waste our time and money in compliance, and sap our initiative to create wealth. Changing from a republic to a democracy is making us poor and angry.

As Gary North said, “Thou shalt not steal, except by majority vote.” People of all political persuasions will pay the price as various groups attempt to get a large enough voting block to cause the government to usurp the power to confiscate money from those who have it and send a substantial portion to them. Different groups will receive larger percentages of the monies stolen by our government as the winds of politics shift back and forth, and it will become more and more important to vote for a living than to work for one. Acting as a democracy, the white majority in some states subjugated the black minority with Jim Crow laws.

Now that we are in the Twenty-First Century, various groups are trying to defend our Constitution and restore our republic.  If they succeed, our country will prosper once again. If they fail and the left-wing misinformation campaign succeeds, our country will continue to decline. You can count me among the enemies of democracy. Along with our country’s founders, I support our republic— our dying republic.

1964 graduate of the University of Alabama School of Law, Durham Ellis is a real estate broker living in Birmingham, Alabama. As a student, Durham was influenced greatly by the clear, logical analyses of such libertarian and constitutional thinkers as Ayn Rand, Thomas Sowell, and Neal Boortz. He served in the U.S. Army from 1964-1966.