HomeNationPolitically-Motivated School Walkouts Are the New “Fidget Spinner” For Kids 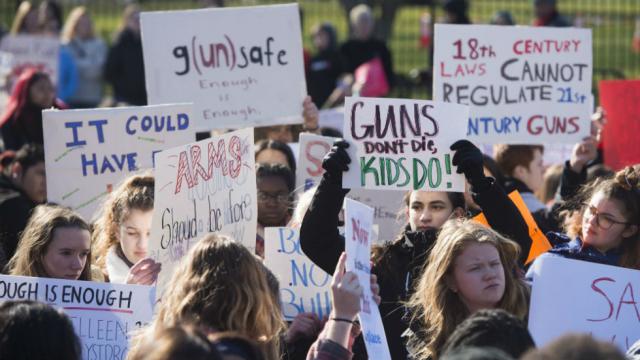 On March 14, 2018 all across the nation, students staged walkouts from their regularly scheduled classes to protest…something. In theory they were protesting gun laws, but knowing teenagers, the vast majority were protesting having to sit in class. When you’re 14, any excuse to cut class is a valid one.

Being the calm, thoughtful nation we are, we collectively sat down to discuss the merits of- ah, who am I kidding? The internet lost its collective shit, like it always does.

Madness! Mayhem! Anarchy! Students left class! They’re being controlled! It’s the Deep State, I tell you! George Soros is behind it! If I use one more exclamation point, daddy might love me!

With all of the subtlety of a rutting rhinoceros on a bad acid trip, we once again charged blindly at imagined conspiracies, working up a collective rage boner that would have shamed the Celts.

The Right accused the Left of hating freedom, and using kids to push their agenda. The Left accused the Right of hating kids, and somehow managed to throw accusations of racism into the mix. Meanwhile, aliens concluded that there was no intelligent life on Earth, and the best thing they could do was bugger off until after the next ice age.

If you haven’t guessed by now, I find this whole thing to be faintly ridiculous.

Look, guys, can we just call time out for a second? Maybe stop screaming at each other for long enough to think?

You can put your Nancy Drew Fan Club hats down. There’s no great mystery here. The walkouts? This is just kids being kids.

You could argue that they’re being manipulated. And maybe in some isolated cases, they are.

In both instances, adults are using their power to pressure the students one way or another. Guess what? That’s what adults do. We decide that teenagers are blithering idiots who are incapable of making up their own minds, and we try to impose our wills on them, for better or worse.

Meanwhile, we forget that we too were kids at some point in the distant past, and we purely hated that action.

I’m not at all surprised that the walkouts caught on nationally. And no, I’m not all that upset about it. Like I said, it’s just kids being kids.

Remember fidget spinners? You know, those little plastic contraptions that were originally supposed to help with ADHD, but ended up being adopted by everyone under the age of 18 as the latest and greatest thing ever?

For a few months, they were everywhere, and we all lost our collective minds, once again, making fun of them. Then, just like magic, they were gone. Poof. No one gave a damn about fidget spinners anymore.

When I was growing up, we had yoyos. It didn’t matter that most of us could barely walk the dog, if you didn’t have a yoyo, you weren’t shit. Same with Pokemon cards. And skateboards. And Pogs. Remember Pogs? Schools were banning the damn things because kids were getting into fights over them.

They were all fads. They blew up seemingly overnight, were immensely popular for a time, and as suddenly as they appeared, they faded away into obscurity.

That’s all the walkouts are. They’re the next big thing. The next fad. And, just like every other fad in the history of the world, the walkouts will run their course and we’ll all find something else to complain about.

For the love of God, people, isn’t it about time we stopped going apeshit over this stuff? Let the kiddies have their fun. Let them feel like they matter, if only for a few short weeks. They’ll have plenty of time to get used to the idea that they don’t once they graduate.