HomeNationContemporary AffairsThe Virginia Threat – Is The Enemy In Our Back Yard? 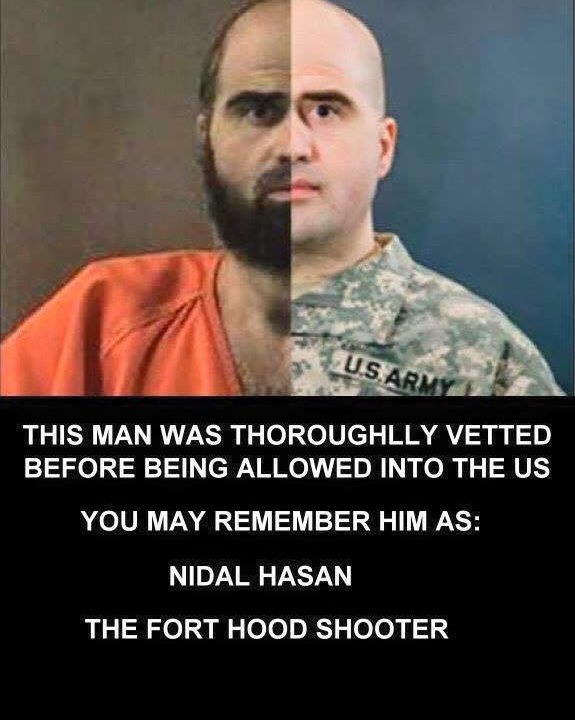 This meme popped up on my social media this morning and it made me think. 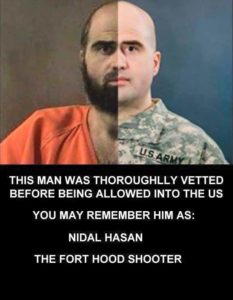 At first, I thought it was idiotic, but then I looked at it again. I poured a fresh cup of rich, black coffee and, once the sweet and delicious caffeine began coursing through my gray matter, I began to analyze the meme more closely. And it began to make sense.

It’s true. Major Nidal Hasan, also known as the Fort Hood Shooter WAS properly vetted before he was allowed in this country and permitted to serve in the greatest Army in the history of the world. But that didn’t stop him from murdering 13 people and injuring 30 others when he went on a shooting spree in Fort Hood, Texas in November 2009. Hasan – whose peers and supervisors knew was exhibiting signs of irrational behavior and Islamic extremism – committed what many, myself included, consider an act of terrorism.

Why was he allowed into the United States? Why was he permitted to be commissioned as an officer in the United States Army? How does this relate to the issues we are facing today with the refugees from Syria and their potential ties to terrorism?

It should have some as no surprise to anyone that Hasan would eventually fail in his loyalty to America – look at who he was and where he came from. Virginia.

Yes, you read that correctly. Nidal Hasan was allowed to enter the United States from Virginia. He, a natural born, native Virginian, was permitted to wear the uniform of a United States Army Soldier. Yet no one in this age of politically correct idiocy thought anything would happen.

Well, I am not some blind and deaf neophyte praying at the alter of political correctness. I call Hasan what he was and I don’t give a shit who gets offended. He was a Virginian Confederate!

Yeah, I said it. I said it and all of you were thinking it, but you are to polite to say what needs to be said.

Virginia, once a slave state, was ground zero for the bloodiest war in American history – The American Civil War.

In 1861, Virginia seceded from the United States. General Robert E. Lee, a Virginian, led the Confederate Army against the United States – killing American Soldiers. John Mosby, A.P. Hill, George Pickett, and many other Virginians joined up with the insurgent army and fought against their people. 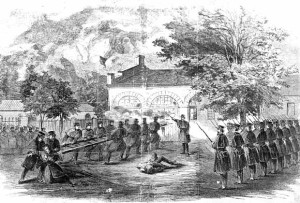 Really? Then why are some Virginians still driving around with Confederate license plates? If these Virginians were not all secretly Confederates or, at the very least, Confederate sympathizers, why would they not have gotten rid of the flag of our enemy 150 years ago?

Still not convinced? Just this week, the FBI arrested three Virginia men for plotting to purchase illegal weapons for use in a series of domestic terrorist acts, including the killing of black and Jewish people in furtherance of extremist white supremacist philosophy. The acts of proud Americans…or the behavior of people who want to return to the days of slavery? You know the answer to that. You’ve just been brainwashed by the political correctness mafia into silence.

I am certainly not saying all Virginians are evil. There are 8.36 million people living in Virginia and obviously they are not all anti-American Confederate extremists. But even one percent of 8.3 million people is still more than 80,000 people (and I think we all know it is more than one percent…). Would you let 80,000 Confederate extremists move into your neighborhood?

Let me ask you a question. If I had a plate of sliced Virginia ham and I told you only one or two of the slices were poison, but I didn’t know which slices – would you enjoy a heapin’ helpin’ of my hospitality?

Benjamin Franklin famously said, “Those who sacrifice liberty for security deserve neither.” I say bat guano! Benjamin Franklin was a great man and an incredible thinker, but he didn’t live in a world where extremists were using every means available to destroy our way of life. Weapons like Twitter. Besides, Virginia was an ally then. 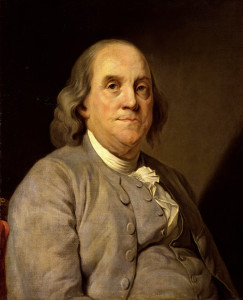 Every time we ignore the obvious and let Virginians into our beloved country because we’re scared of offending them or not being multicultural enough or of being called xenophobic, we are allowing ourselves to move one step closer to another Harper’s Ferry and nobody wants that.

You might want to call me a close-minded bigot because I am willing to speak the truth about these Virginians and the threat they pose to liberty, freedom, and safety, but I don’t mind. I am just saying what everyone else is thinking.

I’m kind of like Ted Nugent in that respect. But sane.

Author’s Note: This essay is social satire meant to use sarcasm and outrageous claims as a vehicle to demonstrate a point about judging millions based on the actions of a few and about using memes that are completely without facts to further a position in an argument. The author has no ill will against the Great State of Virginia or her people. In fact, some of his best friends are Virginians. Well, one of his best friends, but he knows a bunch of dudes who have moved there, so, yeah.