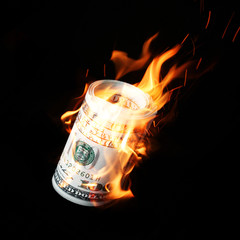 As reported by Forbes, ABC, and Breitbart, the Department of Veterans Affairs has been on a spending spree over the last ten years, acquiring (among other questionable expenditures) some very expensive fine art.

How expensive?  How about $20 million dollars worth.  That had better be some damn fine art.

Except… it isn’t.  Among other questionable expenditures, the VA doled out almost half a million dollars for a “decorative rock,” thousands more to spell out Presidential quotes in Morse Code (who even reads that anymore?) and my personal favorite, over $200,000 for–get this– artwork to decorate the lobby of a clinic dedicated to treating blind veterans.

Maybe instead of spending $670,000 on sculptures that blind veterans can’t even see, they should spend that money on getting those veterans seen by health care providers.  Or maybe they could commission some veteran-made artwork, the kind that goes for thousands of dollars per piece, not hundreds of thousands.  It would probably be just as aesthetically pleasing, and be more meaningful because it would be by vets, for vets.  But that’s not what the VA chose to do.

In an era of “death lists,” long wait times, and widespread corruption, you’d think the VA would be more mindful of public perceptions. But I guess when you’re an unaccountable government bureaucracy, you can get away with doing whatever the hell you want, even if that’s burning millions of taxpayer dollars on useless rocks.