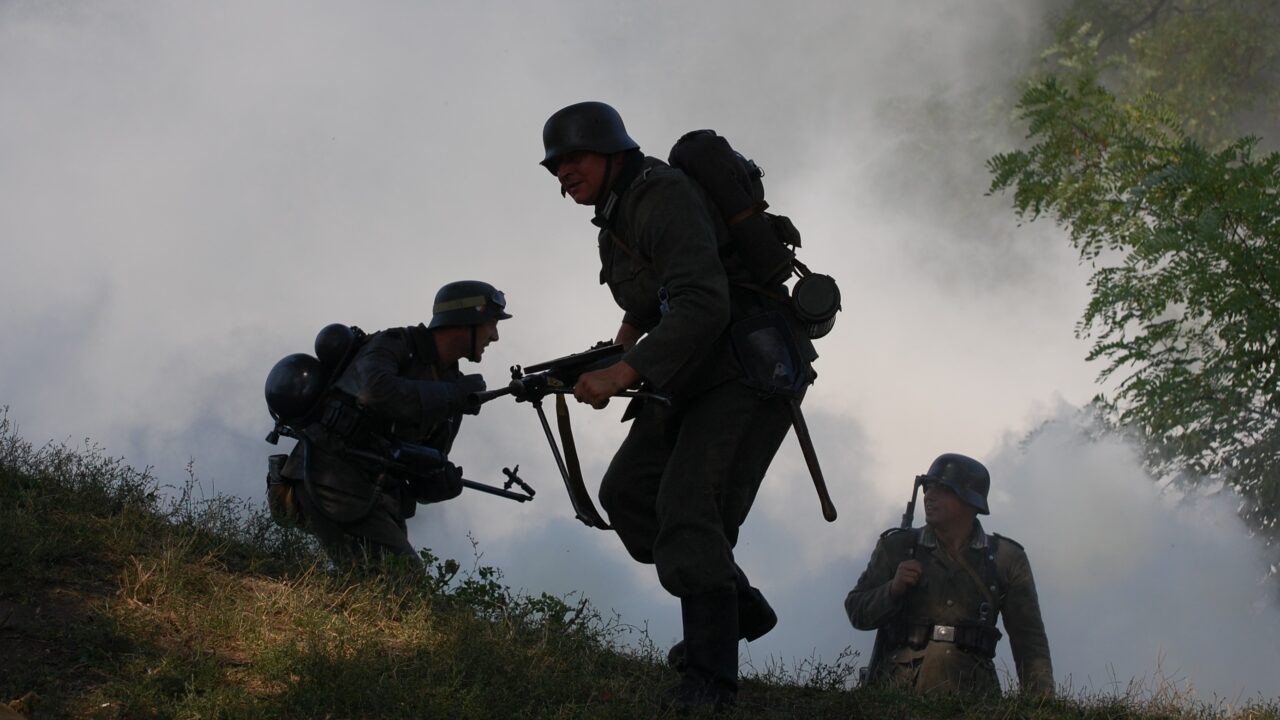 Translated from the German:

“There were once five young fellows,

proud and ready to go out to fight.

Not one returns home.” – from Five Wild Swans once Flew (a traditional Lithuanian folksong

My wife, Karin, was born in 1954 in postwar Germany. The last shot of the war had been fired nine years before her birth, but she started her life in a country haunted by the effects of World War II. The land and the people were still scarred by the violence. Her father and her uncles had all fought for the German Reich. Even when I first met them in 1983, they were still dealing with the issues that all veterans have, regardless of when and where they served, and regardless of what cause they served.

Little by little, I learned their stories. They told me about their years in the military. Now I am telling these stories to you.

Karin’s father, Max, was drafted into the Wehrmacht, specifically the Luftwaffe, in 1938. He was eighteen at the time and had already spent his earlier teenage years in the Hitler Youth. He was from Silesia, which is now part of Poland. In 1939 he was part of the invasion of Poland. He served in Italy after that. Then he was transferred to the Russian Front with almost all the rest of the German forces. Eventually, the Russian Front moved west until it halted in the smoldering ruins of Berlin. Max got shot in the lung just before the war ended. He convalesced in a Lazarett, a German field hospital. He never went home again. He started his civilian life as a refugee, not knowing where any of his family members were.

Karin’s Onkel (Uncle) Kurt had been in the German Army. He was also originally from Silesia. Kurt was stationed in occupied France. On Christmas Day of 1943, he married Aga. He had only a couple of days of leave. After the wedding, he returned to his unit in France. He did not see Aga again until 1948. He was captured by the Allies after D-Day, and he was held as a French prisoner of war for three years after the end of the war.

The French did not give Kurt and his fellow prisoners enough to eat. Kurt worked in the vineyards. At times he was so hungry that he ate unripe grapes. Those gave him severe diarrhea and dehydration.

Kurt told me that, when he was finally released by the French, he found Aga (who was also a refugee) near Bad Mergentheim. He said that he got off the train and saw her standing on the platform waiting for him. He told me that it was as if no time had passed at all. She looked just the same as she did at their wedding five years before.

After the war, he became a salesman. He was good at it. He was always friendly and quick with a joke. Once he and Aga were back together, he would always make himself a plate of sandwiches before turning in for the night. He placed the sandwiches on his nightstand next to the bed. He did this every night for years because he wanted to be sure that he had enough to eat.

Karin’s Onkel Friedolin (Friedl) was bauernschlau, or “street smart”. He was not well educated. He had grown up on a farm. However, he knew how to take care of himself.

Friedl initially worked in an armaments factory. However, he wasn’t getting enough food, so he joined the army. He was trained as an anti-aircraft gunner and was stationed in Dresden. His unit was moved early in 1945, just before the firebombing of the city. He barely missed being incinerated.

At that point in the war, chaos reigned in Germany. The Reds were at the Oder River, east of Berlin. The Nazis were feeding every soldier they could find into the Soviet meat grinder. Friedl was at a train station waiting to go east with his unit. Some troops from Bavaria were loading onto another train. They told him, “Komm mit uns! Wir fahren richtung Süden!”

“Come with us! We’re going south!”

Friedl went with the southern boys. He got off the train a few kilometers from his home. Then the war ended.

I don’t know what Max, Kurt, and Friedl were like during the war. Maybe they were rabid Nazis. Somehow, I doubt it. They got swept up in events they could not control, and they somehow survived. When I met them, they were the age that I am now. They were old, and they seemed to have made some sort of peace with their past. To the end of their lives, they believed that they had only fought to defend their homeland. They believed that they had done their duty.