HomeNationOpinion: So, You Want to Impeach the President? 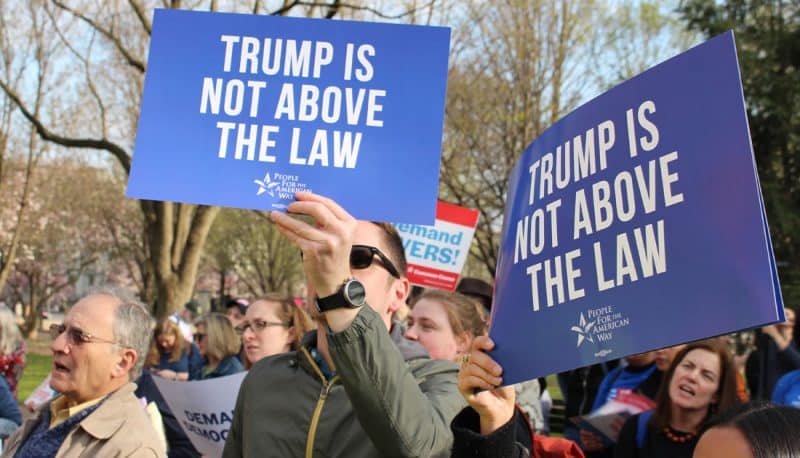 Opinion: So, You Want to Impeach the President?
by Tom Amenta

The clamor to bring an impeachment inquiry has finally birthed. My friends on the left have been dancing up a storm, thinking President Trump is about to get his. The reckoning is coming, start singing “Na na na na, na na na na, hey hey, good byeeeee!”

What none of the people in this group seem to fully grasp yet, is there is not a chance in HELL President Trump will be convicted of any articles of impeachment in the Senate.

Let’s do some math.

The Republican party holds a 53-47 majority in the Senate currently.

You need a 2/3rd’s majority (67 votes) to impeach. Of the 33 seats that will be up for vote in the next election cycle, only five of them are considered to be contested- four on the Republican side, one the Democratic side according to Charlie Cook’s most recent analysis.

Further, if there is one thing Mitch McConnell has been steadfast in, during his tenure as Senate majority leader, it’s been party first. One of the few things President Trump and House Majority Leader Pelosi see eye to eye on is lowering prescription drug costs. President Trump praised her new proposal this week, McConnell called it “dead on arrival.”

The Democrats have not had, do not have, and will never have the votes on this.

The thing so few Americans seem to be missing as this machine starts to move is that articles of impeachment or a Senate conviction on those articles, isn’t about the law. It’s not about “right” or “wrong” or any of the courtroom tropes that we love to use in situations like this.

Look at the fall out post President Clinton’s impeachment. The Republicans LOST five seats in the house after they failed bid to get him out.  That was historically unprecedented. In that case, the former President was flat out dead to rights on the charge of sexual misconduct (the fact that the proceedings never should have happened is another story, but shout out to my old professor for debating me in my 30- level Poly Sci course — to the point where I realized the truth of that. That was at the University of Illinois in 2007).

These sorts of things are about who can shape an opinion, and PR for the next election cycle. It’s about influence and the politicians making the decisions required to get re-elected. Trump went off script on that call to the Ukrainian President and once again showed how much of a selfish arrogant jackass he is, but didn’t outright hang himself.

“The good of the nation” or “the good of the people” are phrases thrown around every day in politics. It resonates so much, so loudly, because it means so many things to so many different people.

What is good for Inner City Baltimore isn’t what’s good for rural Iowa more often than not, which is why we have the government set up that we have., and the states rights to boot. This is what so many people forget.

That is where the power of perception and spin and focusing on broad, vague, notions rather than specifics hold so much power.

I do not want Donald Trump in office, there is absolutely no situation at this point where I’d vote for him. Nor did I vote for him or Hillary last time.

But if this goes to the floor of the House, the articles of Impeachment I’m sure will be ratified, the House is controlled by the Democrats. Then the Senate will throw them out.

Tactically, President Trump, just like the Mueller Report, claims victory and that he was once again the victim of persecution. Then, coupled with the best economy (even with the bear warning signs) we have seen in a decade to run on, the Dems constantly having to play defense for the impeachment decisions, you know what you have?

A recipe for Trump to win.

Ask yourself: Why do you think an administration which still won’t release the tax records or a host of other documents Congress and the press have been screaming for, suddenly declassify and gave up the full transcript? If McConnell has the Republicans on a leash in the Senate, and he does, who benefits from the Kabuki theater?

This is saying nothing of the second order effect of the President knowing they can’t try to impeach him again for those next four years, or if they do… I really don’t want to think about how wrong he’d have to be. How awful a choice he’d have had to have made.

It’s not about right and wrong. It’s not about justice. It’s about power, and the game of power. If the Democrats really pull this trigger, they’ll lose way more than they bargained for.