HomeNationLet’s Stay Out of Venezuela 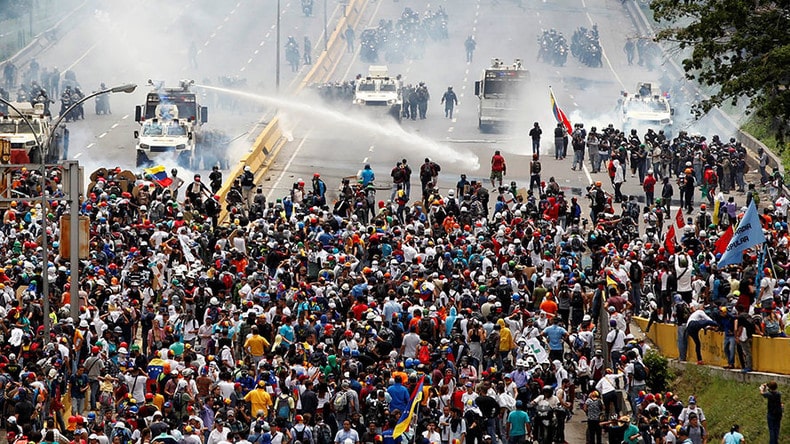 Let me preface this little rant by saying that I am not inherently against using the US military to provide humanitarian assistance to those in need, to interfere in places where the government has failed its people, or even giving the Russians a good swift kick in the backside to remind them that they are not, in fact, the top dogs on the international porch. I’ve several reasons for wanting us, as in, the United States, to stay out of Venezuela, but those aren’t among them. If you read the title of this piece and assumed I was some hippie communist moonbat, well, guess again. I eagerly await your presence in the comment section, so I may mock your inability to read.

My reasons for staying out of Venezuela are threefold.

Firstly, we aren’t in any shape as a military to jump yet another war, let alone one that has the potential to turn into another endless quagmire. In case you haven’t noticed, we still have troops in Afghanistan, almost 18 years after the Horse Soldiers first rode in to support the Afghan resistance against the Taliban, and we’re no closer to fixing it than when we started. We spent nearly a decade in Iraq, pulled out in a hurry, and lo and behold, a few years later ISIS was a thing, which not only sent us back but got us embroiled in Syria. Oh, sure, we’re pulling out of Syria (sorta kinda maybe), but that place is still a nuthouse, and we’re likely going to have to stick our peckers back into that particular blender in the next decade or so. I’m not really allowed to opine on that at the moment, but gimme a few months and I’ll explain what I mean.

If anything, Venezuela has the potential to be worse. I’ll grant that the average man or woman on the street is likely to be thankful to anyone who kicks out the madmen in charge and reintroduces a life where toilet paper isn’t an unspeakable luxury. I’ll also grant that they don’t exactly have the rich history of militant religious fanaticism that’s made the Middle East such a joy these last few decades.

But you know what they do have? Freaking jungles. The Middle East, at least, had the virtue of being a desert. Sure, it’s hot and dry and any sort of wind makes the air unpleasantly crunchy, and Afghanistan added mountains and caves to the mix, but desert fighting ultimately isn’t as nasty as jungle fighting. An insurgency in the desert, operating primarily out of urban areas and fighting with IEDs and ambushes is one thing. One doing the same thing, but minus the desert and with the added wrinkle a triple canopy jungle to retreat to, is quite another. I’m sure someone will try to argue that we did just fine in ‘Nam, but A: no we didn’t and B: all of our gear is still painted for the freaking desert.

Not to mention, after nearly two decades of war, much of our gear is in desperate need of refit or replacement. The HUMVEE is on the way out the door, but it’ll be years before it’s gone completely. And as faithfully as the old girl served during peacetime, the aforementioned wars in Iraq and Afghanistan have proven it woefully inadequate for the 21st century.

The same could be said for pretty much every other wheeled vehicle in service these days that wasn’t designed in the last decade. You can bolt armor to the cab of an LMTV, but that doesn’t make it bomb-resistant. If we send troops into yet another war, and if things go as badly as they could, young men and women are going to die because they weren’t adequately prepared or protected.

This brings me to my second point: every one of those deaths will be utterly and completely unnecessary, because we don’t need to go. I realize this is going to sound really crappy, but Venezuela is not our problem.

I’m wildly aware that the whole country is one big humanitarian crisis at this point. All you really have to do is glance in the general direction of a TV these days and, if you’re not bombarded by Congress’s latest publicity stunt, you’ll get slapped in the face by the grim reality of just how big a crisis it is. It’s terrible, and it’s tragic as hell, but it is not our freaking problem.

It’s pretty damned difficult to reason, without resorting to conspiracy theories, that the situation in Venezuela poses a direct threat to America, its allies, or its interests, even with the Russian boogie man lurking in the shadows. Sure they have oil, but so does Texas, and we’re not about to invade Texas, are we?

We’ve got more than enough economic and social problems within our own borders to handle before we should even begin worrying about what’s going on somewhere else. Maybe that’s cold, but you know what? Tough. The world is a cold place, and it is not our job to spend blood and treasure to fix it. Every time we try, it blows up in our faces.

Let the Venezuelans fix Venezuela. If they somehow get a handle on their problems and/or ask the global community for assistance, then by all means, let’s stand shoulder to shoulder with the nations of the world and lend them a helping hand. If they don’t, well, that’s their problem. We have neither the moral obligation nor the right to impose our will on any nation or people that doesn’t either ask for our help or take a swing at us. It’s arrogant as hell to assume that we do, and frankly, that attitude’s bought us enough trouble over the last fifty or so years.

But what about Russia? you ask. Well, here’s my third and final point. Russia? Not our freaking problem. No, they are not our friends. Yes, they absolutely want to supplant us as the superpower on the face of planet Earth.

Let ‘em try, the bastards. If they go in and it turns out they’ve stuck their fingers into a meat grinder, well, better them than us. If they actually accomplish some good, yay! We’re not on the hook for the bill. If Russia actually helps Venezuela, and in the process manage to expand their sphere of influence, so f-verbing what?

The Cold War is over, folks. The Commies aren’t going to storm the Fulda Gap anytime soon. The only realistic threat they pose to the United States or our allies is the one we’ve imagined because we can’t quite get over the fact that World War Three didn’t break out on schedule. The world is a big place. There’s room for both of us to play. Our knee jerk reaction to check them every time they stick their noses out of their sandbox benefits exactly no one, except for the politicians who think they can keep themselves in office by drumming up a Red Scare every time they lose a point in the poll.

The bottom line here is, at some point, we have to remember that Team America: World Police was a satire. We probably shouldn’t use it as an instruction manual for foreign policy, however inspirational we might find the Dicks and Assholes speech. It is not our place to fix everything that’s wrong in the world, and they’re tired of us trying. How’s about we just sit this one out?