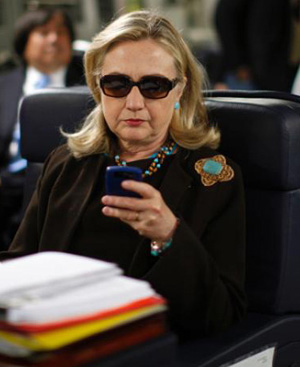 This first appeared in The Havok Journal March 4, 2015.

According to the President of the United States, records are the foundation of open government, supporting the principles of transparency, participation, and collaboration.

The stated intent of M-12-18, Memorandum for the Heads of Executive Departments and Independent Agencies, is to clean up government and make it more accountable to the citizens. The interesting part was that it was signed in November of 2011.

Hillary Clinton was a head of an Executive Department in 2011. In fact, she was the Secretary of State and she summarily failed in nearly every principle that this Presidential Memorandum requires. The IRS did, as well, but that is a different article.

It seems that the Secretary of State missed this memo, probably because it was sent to a government email address, which apparently she never had.  I guess when you are the third most valuable person in a nation of 330 million, you don’t need rules. And maybe you don’t need to obey the orders of the sitting President when you expect you’re going to be the next one.

By Federal Law, records are defined as all recorded information, regardless of form or characteristics, made or received by a Federal agency under Federal law or in connection with the transaction of public business and preserved or appropriate for preservation by that agency or its legitimate successor as evidence of the organization, functions, policies, decisions, procedures, operations, or other activities of the United States Government or because of the informational value of data in them; . . .

The evidentiary fact that any government email, especially from the Secretary of State in accordance with their stated duties, falls under this Federal Law and Presidential Memorandum. It is clear that the Secretary of State not only summarily failed to avail herself to the spirit of the law, she out right defied it by keeping personal accounts in complete disregard to the system.

Now why would she do that? In practical terms, never mind record keeping, who is she representing? If I send out an email from work, but use my personal account, who am I representing? I am representing me, of course. This is ethics 101.

But it is not just ethics, either. How many security violations were created by those emails which were sent via private account and bypassed the encryption requirements and information security processes that the government has? We had several viruses in the past two years that affected email. So what faith and confidence can you really have?

Ethically, building an address book of world leader’s sounds pretty cool. However, it would seriously compromise the integrity of any official communication if it came from a suspect source. Not to mention it would have to be obvious from the start that it cannot be “official” if it is coming from a yahoo account.

So once again we are left wondering about government accountability and the deliberate actions of an executive branch which defies the President. He gave an order and it was deliberately disobeyed.

In one action she deliberately violated Federal Law by not availing herself to the resources to which the expectation was built for and the President who sent out a detailed directive. It could be argued that her personal emails are available, but that is not the case. The server and other information where her emails or data is stored are not subject to search and seizure without probable cause.

The legality the Federal Records Act runs right up against the 4th Amendment. By using a private email system, she could not be coerced into releasing information. No one might even know that there was any information except that it was discovered that they had none. Members of Congress asked for information under the law and were told there was none.

So what do you think about a government official that deliberately uses a private account to conduct business in order to make sure that they don’t have to expose themselves? She has been in and around politics for over 40 years. She knows damn good and well how federal records are maintained.

We can only come to one conclusion. She knew that she was going to run for the White House and she wanted nothing that occurred while she was Secretary of State to be able to be used against her. This is a deliberate calculation. It might be one thing if she was using two emails and sent the “critical” message on the personal one. However, by only having the private account, she ensured that no one could use the Freedom of Information Act to obtain her records.

Any time a government official ensures you cannot get to their records, they have something to hide.

I have never doubted that Hillary Clinton would do whatever it takes to get what she wanted. Now we have yet even more proof of her unfitness for political office. I have also never doubted that there are those who will find nothing wrong with this act and who will vote for her.

We are never going to have a government that is accountable to the people if we don’t start holding them accountable. Many of you will say that we don’t have it now and never did. Part of that problem is that elected officials have always felt that they were placed above us instead of representing us.

We have social media. We have a public voice that is nearly impossible to silence. We need to start using it for something.