HomeNationHarvard, Chelsea Manning, and the Crisis of Misinformation 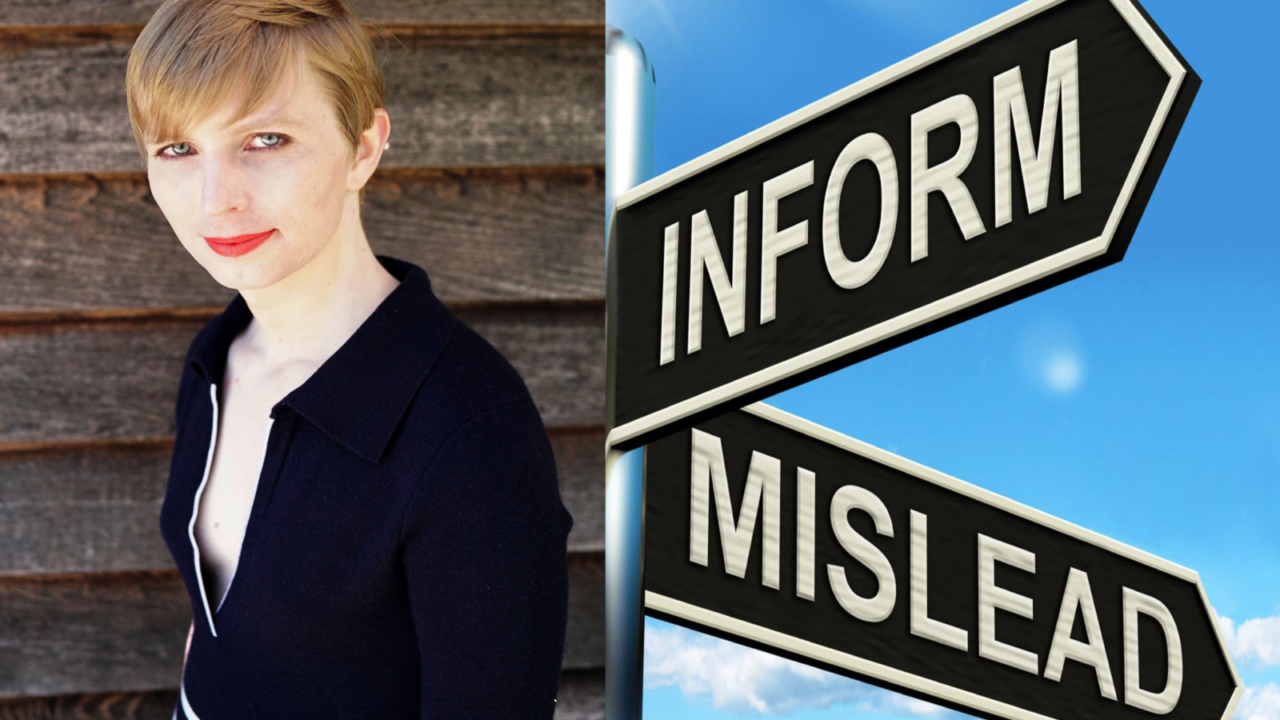 If there is one thing of which we can be sure, it is that Chelsea Manning is out of prison and attempting to start making the Controversial Public Speaker rounds.

If there is one other thing of which we can be sure, it is that no one is quite sure what to do about Chelsea Manning being out of prison and making the Controversial Public Speaker rounds.

Case in point: Harvard University’s 24-hour turnaround on inviting Manning to be a visiting fellow and then disinviting her to be a visiting fellow. Dean Elmendorf of Harvard’s Kennedy School said in his letter rescinding the offer that the school frequently invites controversial figures as part of the one-day program. However, the volume of concerned opposition regarding Manning’s conviction history resounded loud enough to reconsider.

But Manning is only a symptom of the larger problem. When these forums bring in controversial figures to “broaden minds,” they make business decisions– not academic ones. Controversy, not knowledge, increases attendance. The figures know how to make their story appeal, often by over-selling any supposed expertise. The problem is these forums then open the door to a dangerous rabbit hole, giving false narratives a platform at reputable institutions.

Harvard opened this door with Manning, who talks a convincing game on the surface. While she claims to be a star analyst and critical thinker, she was a junior Soldier the entirety of her brief career. She cannot speak to military policy and procedures (especially those she circumvented in reporting her suspicion of criminal activity, channels she learned along with every other military intelligence student who might come across incriminating information). She claims to speak for transgender military members, but she started hormone therapy in prison where she was mostly in solitary confinement. She has not been an activist for LGBTQ in society, even upon release. Harvard must not have noticed her resume critically lacks.

The danger of having someone like Manning speak is real, especially to an audience of young college students or any group of “progressive elites” with no frame of reference for the military, intelligence operations and procedures, suspected criminal reporting, transgender integration and biology or sociology, or… really much of anything. Replace her on stage with a background actor on a medical drama explaining how to remove a brain tumor would give about as informed a presentation.

But in the rescinding letter, Harvard leaves open the possibility for Manning to take young minds down her dark roads of supposition and mistruth instead of knowledge and experience. And that’s a problem, because her story stinks to high heaven and these kids racking up astronomical college loan debt for the Harvard name on a piece of sheepskin would be none the wiser.

And they would be missing a lot, because Manning’s statements don’t line up with each other– or often with reality. In June 2017, Manning spoke publicly about why she transferred an indiscriminate multitude of classified documents to a foreign entity. Echoing her 2014 statements to The New York Times, Manning spoke of love of country and an obligation to speak up about the illegal activity in US and Iraqi militaries and the Iraqi police. It sounds noble, and makes for lovely talking points to get speaking gigs and inspire young minds.

Interestingly, this was not the information unearthed through investigative reporting from Gawker (RIP) reflecting a depressed, insecure Soldier seeking acceptance, not honor. Manning had a crappy, analyst job as a junior Soldier on a long deployment with a mean roommate and repressed sexuality. She sought out Wikileaks, participating in anonymous chatrooms not to send information and save lives but to feel included. She made friends in the chat, so it was to them she turned when she felt her command ignored her concerns.

Her story gets worse upon conviction in 2013. Manning spoke directly to the judge: “I’m sorry I hurt people. … I’m sorry that I hurt the United States. I’m apologizing for the unexpected results of my actions. The last three years have been a learning experience for me.”

This is also false, though Harvard et al might not realize this without a real subject matter expert pointing out the problem. Manning expected the results: she learned in her analyst training that classification markings indicate the amount of potential harm the information might cause the US. Those markings are on military documents before they reach the desk of a junior analyst like Manning. As for causing harm to people, Manning released Embassy cables along with thousands of US military intelligence documents. Reports could be corroborated to identify informants and other intelligence. Manning spoke at trial of putting together pieces of information from different sources during her analysis before approaching supervisors. Apparently she didn’t realize other information could also be combined by anyone with the limited expertise of a junior analyst.

But Harvard asked Manning to speak on LGBTQ issues, not military issues. Unfortunately for Harvard, Manning has similarly faulty stories on relating her gender identity to her military life. While maintaining her roommate in Iraq disliked Manning suspecting sexuality disagreements, and this dislike pushed Manning to find solace in the Wikileaks chatrooms, according to other accounts Manning already had a reputation of behavior that ostracized her from her peers. It wasn’t her gender identity causing her loneliness, it was her identity of being a brat. Her advocacy is similarly questionable, mostly consisting of 3 a.m. tweets attempting to link bias to institutions. Harvard might be better to consider someone like Kristen Beck, decorated Navy SEAL and vocal transgender advocate, to speak on LGBTQ issues in or out of the military.

What is particularly dangerous is in forums such as the one offered at Harvard and other “controversial” presentation habitats, seldom is anyone present to challenge the lack of expertise in the speaker. Instead of broadening minds, the institutions are creating a crisis of misinformation.

We are a country founded on freedoms, including that of speech. Manning, and those like her, can say what they please and tell whatever stories they like. We cannot count on them to tell the truth, but we also cannot restrict their ability to tell stories.

But we still owe it to our communities to stem the spread of the misinformation. Instead of contending with the institutions to stop offering speaking engagements, who know no better than they are giving someone a platform to tell a story, we can offer them a solution. Offer JAG lawyers and Inspectors General to provide questions and challenge the stories. Offer one of the 15,000 transgender members of the military community the opportunity to speak alongside, or instead of, those like Manning. Remind the institutions that one side of the story is still only one side, so shouldn’t their controversial topic present all the evidence for the audience to make a decision? If Kristen Beck were interviewing Chelsea Manning, wouldn’t that provide the controversy, the advocacy, and most of all the full scope to prevent the spread of misinformation to those not in a place to know they are being lied to?