There is so much truth in those words.  Trump is prompting us to ask why, for what gain, and to acknowledge the lives and money lost.  Those are all valid talking points.  I still deal with well-meaning Americans who have no idea we are still fighting in Iraq and Afghanistan.  The struggle to educate the American people on our international involvement is real. His vitriol against President Obama and Secretary Clinton for not naming radical Islam as an enemy of the U.S., is misplaced although he has a point when he says, “unless you name the enemy, you will never ever solve the problem.”  The anger could and should be directed against Congress for failing to declare war in the first place.

“We’re getting out of the nation-building business and instead focusing on creating stability in the world.”  This is a great press statement but it still denotes American responsibility worldwide, even with his “America First” agenda. If the military doesn’t shoulder the burden, the State Department and other arms of government will be forced to do more worldwide.  Trump plans on doing this by containing radical Islam, ISIS in particular, rebuilding our military and our economy, and developing a foreign policy based on American interests.  While choice statements about higher paying jobs, supporting innovative industries, and halting catastrophic attacks on U.S. soil ring home, “defeating terrorists and promoting regional stability” in the Middle East is a worn yarn.  A multi-polar world is a dangerous one as offensive realist John J. Mearsheimer would say.  I tend to agree.  Move on, Mr. Trump.

“We desire to live peacefully and in friendship with Russia and China. We have serious differences with these two nations, and must regard them with open eyes, but we are not bound to be adversaries. We should seek common ground based on shared interests.”  Trump earlier chastised Vice President Joe Biden for criticizing Israel, then accused Russia and China of military growth and espionage engagements, but still wants to Russia and China to be friends.  This strikes me as a bit indelicate and hypocritical but such is politics.  Trump is right saying Russia has seen the evils of terrorism and fixing China relations would lead to a more prosperous time.  Improved relations would positively affect tourism, trade, and economic growth.  Win-win-win.

“I will not hesitate to deploy military force when there is no alternative. But if America fights, it must only fight to win…Our goal is peace and prosperity, not war and destruction.” This is standard candidate stump speech but I enjoyed it nonetheless. Mr. Trump, if you can get Congress to actually declare war, be my guest. Peace would be quite welcome, and so would a hiatus from sequestration.

“However, unlike other candidates for the presidency, war and aggression will not be my first instinct. You cannot have a foreign policy without diplomacy. A superpower understands that caution and restraint are really truly signs of strength.”  Again, Mr. Trump speaks truth about diplomacy.  It is truly a lost art these days and the State Department is woefully underfunded compared to the DoD.  I was also surprised to learn of Trump’s opposition to the Iraq War after it started.  He was right, it did destabilize the country.

“That’s why I also look and have to look for talented experts with approaches and practical ideas, rather than surrounding myself with those who have perfect résumés but very little to brag about except responsibility for a long history of failed policies and continued losses at war. We have to look to new people.”  I’m sure pundits and academics like Tom Ricks and Andrew Bacevich will give you lists of people to check in on for your team. Call Brett McGurk (no relation) back in for a chat.  Iraq was at its safest when he was involved. 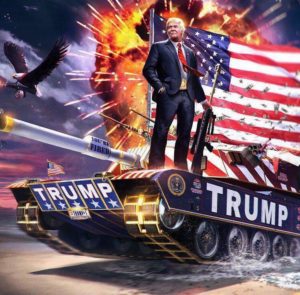 Ultimately, the America First policy speech is simply a first effort, nothing more, nothing less.  Mr. Trump—any presidential candidate—is fooling himself if he believes other nations will simply respect and welcome U.S. foreign policy as he asks.  Other great powers, small powers, and non-state actors have their own international agendas, and diplomacy is not a walk in the park.  The anger surrounding improved U.S. relations with Cuba is proof positive trying to create peace is going to upset someone.

The international world is a fast place.  A friendly country today could be a diplomatic nightmare tomorrow (Looking at you, Egypt).  Enemies becoming friends and friends becoming allies is a nice wish but it takes cooperative effort and compromise.  Those values have waned over the last two decades.  You have seen how Presidents Bush and Obama fared with their Cabinet selections and both houses of Congress.  Any administration needs the right cast of characters to make peace happen.  The public has the ultimate say on who enters Congress. We, the electorate, will cast a vote for people who may halt or help Donald Trump’s proposed foreign policy.

Remember Mr. Trump, the enemy has a vote as well.  To quote Robert Burns, “The best laid plans of mice and men often go awry.”

Marshall McGurk is a former active-duty SF Soldier working in corporate America.  His views are his own and do not reflect the views of the United States Army or the Department of Defense.