Today, the smell of the ocean breeze pushing through my window now fills my lungs as I sit writing in my apartment, one hundred meters from the Pacific Ocean in Costa Rica. I sold everything. I reduced my life to a single backpack in an effort to escape the chaos of my own mind.

The VA had failed me. I didn’t know what to do so I resorted to survival mode. I purged my truck, my home, my business, and every one of my possessions for pennies on the dollar.  As I left I asked my good friend and Ranger buddy to keep an eye on the mail for me, said my goodbyes, and disconnected myself from the fray. 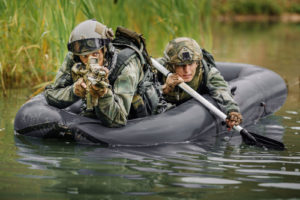 Three weeks ago I received a message from my good friend with an attachment of a letter from the VA. The letter stated that I had ten days from the date posted to respond or the VA would drop my claim for PTSD. When I received the message it was nearly three weeks past the date on the letter. My first thought was that my friend had forgotten to send me the message until it was too late. I asked for the envelope that it came in. He sent me a picture and sure enough, it was post-marked two days after the day that I had been given to respond.

How are you going to send a letter that I have been waiting for eight months to receive, only to postmark it for April 7th with a message stating that my claim for PTSD would be rejected if I didn’t respond by April 5th?

As soon as I could I called the VA. For the first time in history, their incompetence played to my advantage. The person that I spoke with said that they had meant to reject my claim because I was supposed to have responded already but never got around to it (despite the fact that I called in only seven days after the letter had actually been sent). After nearly eight months of waiting, I finally was able to secure an appointment with a real person regarding my claim… sort of.

The person on the phone couldn’t give me a day or time, they could only tell me that the appointment would be in Colorado on the last week of the following month. Okay, I can handle that.  I can fly back to Colorado for a week and a half.  She said that I can expect the letter confirming the exact day and time within the next three days.