The doctor informed me that I exceeded the necessary parameters for making such a diagnosis. I was afraid though. I didn’t want that to be in a file somewhere. I had been under the impression that this diagnosis would mean that I could not own a firearm or apply for a civil service job. At the time, for me, the negative stigma outweighed any potential benefit that could have come from seeking further help.

Three years later, as the snow was covering all of Denver, I circled the tiny parking lot at the VA hospital looking for a spot to park my Dodge pickup. After half an hour had passed, a space became available and after another thirty minutes of sitting in the cold silence of the cab of my vehicle, I finally opened the door and took the necessary steps toward help.  My feet felt terribly heavy.  They wanted to return to the truck. There was no going back from this. Even though I knew that I needed the help, I was still terrified about being labeled with a disorder. 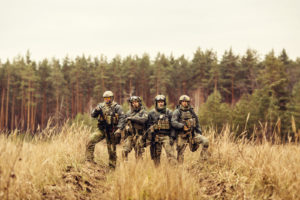 My hand trembled slightly as it reached for the door into purgatory.  A place where everyone’s problems seemed to be someone else’s fault. The VA waiting room is like going to the pound, stepping into the mental health clinic was like visiting the death row section. Broken spirits everywhere. Some of these people had been coming into this place for decades and didn’t look like they were doing too great.  Everyone is somber and pissed off, a fact that doesn’t give a person much hope for personal betterment.

Once again I am handed another form. “Do you have thoughts of hurting yourself or others?” “Fuck yeah I have!” I spent years being taught how and rewarded for killing people. Do you think that is a switch that can just be turned off when you hang up your uniform? Am I going to check yes to that box?  Hell no, I’m not.  I left it blank, along with three or four more questions that I found almost insulting.  These issues expand beyond the parameters of a box on a form, and I am not a number.  The guy behind the inch-thick Plexiglas window told me that I had to check those boxes. I told him that I don’t have to do shit and sat back down. Apparently, that is the magic phrase at the VA because in less than a minute my name was called and I had three different mental health specialists asking me questions in a tiny white room with flickering fluorescent lights.

I won’t bore you with the details, but all three believed that getting in to see someone as soon as possible would be the best course of action. At the time I still had a job so I knew scheduling would be tough. I was given an appointment for later in the week and was able to have someone cover for me at work. I showed back up to the VA, 45 minutes early knowing that it would take me a while to want to walk through the door.  I let the clerk know I was there and found a seat fifteen minutes before my appointment and waited. And waited. And waited. Nearly an hour later I asked if something was wrong.  Apparently, my Doctor forgot about my appointment.

Taking the step into that place was nearly impossible, but having the one person whose job it is to help you not even show up for the appointment is indescribable. This is why I thought to myself. This is why veterans don’t seek help. This is why 22 of the greatest members of our nation kill themselves every day.

The doctor led me back to her office for what was left of our time. As expected, I was spoken to like a victim. I think that I can speak for most of my brothers in arms when I say if there is one thing that I hate it’s being spoken to in a condescending tone. I sat in another cold white room with flickering florescent lights with the ten minutes remaining of my hour appointment.

It was Friday afternoon and she seems just interested enough to not piss me off.  She had me sitting with my back to the door, a fact that makes me even less comfortable. I hate it here. I hate this place and I hate myself for coming here. I hide the twitching of my right arm under the table. She explains to me that she knows all about what’s going on with me and how she has worked with hundreds of other Rangers.

No, you haven’t…. you’ve worked with a bunch of people that said they were Rangers. Everyone who has a cousin in the Army has a cousin that is a Ranger and you don’t know shit about what’s going on with me because while I was in Iraq and Afghanistan you were sitting in this air-conditioned office updating your MySpace profile picture. I want to say it but bite my tongue instead.

Despite the fact that I felt more anxious than I had in years during that appointment, despite having the most intense nightmares of my life that night, despite feeling like it was a waste of time, I made another appointment and another. I did this because I refused to end up like the poor timid souls sitting in that waiting room.  I had already decided that I would not allow those demons to control any aspect of my life any longer.

I was willing to endure more pain in the short term in order to release the long-term anguish and burden of war. The next few appointments went the same as the first. Things were getting worse now, worse than they had ever been.

My reserve chute had always been to flee south. Years earlier, I sat at a table with a dozen different prescription pills that the VA had given me following my shoulder surgery, doing the math on how many it would take to never wake up again. I felt hopeless and alone. My fiancé had left me and as a result, I was losing my business. All that remained for me in this life was the certainty of the night terrors which visited me every evening. Luckily the second bottle of Jameson put me to sleep before I could bring myself to do it. This happened more times than I can count. One morning when I woke up I told myself that if things ever got so bad that I felt like ending my life that I would sell everything I own and move to Costa Rica. I would disappear and live on the beach.