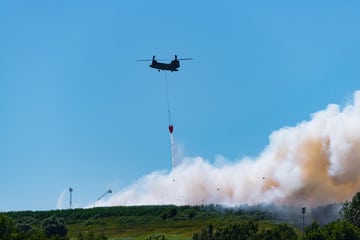 A teenager who flies a Chinook helicopter alongside her father has joined the fight against wildfires raging in California.

Fueled by Snickers bars and bottled water, 19 year old college student Ashli Blaine, a student at Rocky Mountain College in Montana,  co-piloted a CH-47 in support of firefighting efforts on the West Coast.

A pilot since she was 13, Blaine was part of the effort to combat the massive wildfires that have been ravaging California, Oregon, and Washington State, including one that was sparked by a gender-reveal party.