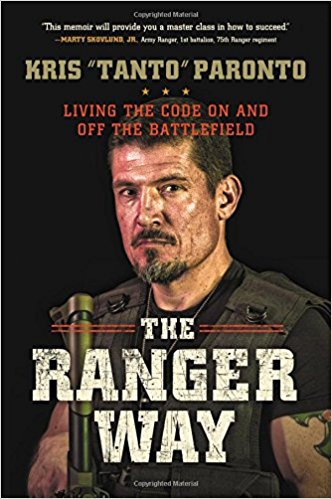 It is fitting with the upcoming, week-long celebration at Fort Benning, Georgia known as “Ranger Rendezvous” to highlight a book published in May 2017. The Ranger Way, written by Kris “Tanto” Paronto, underscores both the value and unique lifestyle of a Ranger. Having both earned the “coveted” Ranger tab and served in 2nd Ranger Battalion, Tanto underscores the importance and influence of the Ranger Creed, his Ranger training, and the Ranger culture on his success in life.

For those who know Ranger Paronto and the causes he supports, this book comes with no surprises in its style. His accounts are personal, raw, and impactful. He gives all the credit of his ability to both survive and thrive in complex environments to his upbringing, his Ranger training, and his faith. His candor in the book shines a light on topics and past experiences, in both life and training, that carried him through a horrific situation in Benghazi the night of September 11th, 2012, a tough fight with would last “13 Hours.”

I found his accounts both refreshing and familiar. I always appreciate and respect a man willing to publicly give credit to his faith in God as a significant contributing factor to not only his success, but also his survival in trying times. Simultaneously, those familiar with the unpolished Ranger culture will not be surprised to find a few four-letter words in the book, which, written from a first-person perspective, puts some realism in his work. He also rightly gives a great deal of credit to the commensurate professionals instrumental in his military career, Ranger Non-Commissioned Officers.

As with many books about the military and organizational leadership, Tanto’s keys to success, his adherence to the Ranger Creed and the Army values are not exclusive to combat scenarios or live fire ranges. His vignettes can apply as much to a boardroom as they do on the battlefield such as finding purpose, goal-setting, and accomplishing a mission while maintaining humility. Whether you are a young Soldier seeking to earn your Ranger tab, considering assessing to join the 75th Ranger Regiment, or an organizational leader in the private sector, there is something valuable to be derived from Tanto’s book.  One thing is certain, it is “not for the weak or faint-hearted.” Rangers Lead The Way!

This article was originally published in June 2017.